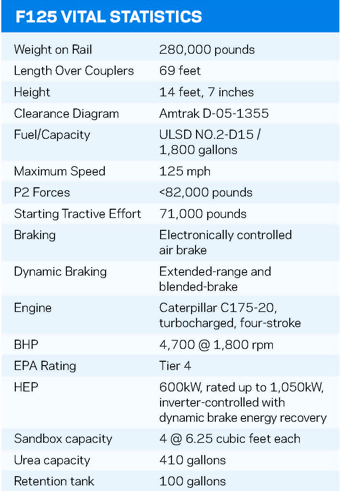 After an absence of 12 years, Electro-Motive Diesel Inc. (a subsidiary of the Progress Rail Services Corp. division of Caterpillar Inc.’s Rail Division) has reentered the passenger locomotive market.

The agreement is an affirmation of EMD’s determination to reenter the passenger rail market, which it stressed during the American Public Transportation Association’s annual meeting in November 2011 in New Orleans.

Generating 4,700 hp, the F125 Spirit is compliant with the PRIIA (Passenger Rail Investment and Improvement Act) 305-005 Next Generation Locomotive specifications, “and meets or exceeds all of Metrolink’s requirements for procuring highly reliable, fuel-efficient locomotives for passenger rail service,” EMD says. “The Spirit is capable of operating at speeds of up to 125 mph, enabling it to satisfy potential increased speed requirements. In addition, the locomotives reduce emissions over Metrolink’s current Tier 0 fleet by more than 85%, per EPA’s Tier 4 emissions standards for new diesel locomotives.”

EMD plans to assemble the locomotives at its Muncie facility in Indiana.

“We are delighted to be working with Metrolink, a visionary agency, and now a leader in the pursuit of new, cleaner-operating passenger locomotives,” said Billy Ainsworth, President and CEO of Progress Rail Services and Electro-Motive Diesel. “EMD is pleased to provide Metrolink with the first passenger locomotives designed to meet Tier 4 emissions standards, marking EMD’s re-entry into the passenger rail business. We are proud to say we are back, and excited to be on the forefront of passenger rail technology From EMD’s first record-setting Zephyr, topping 112 mph in 1934, to our latest F125 Spirit capable of speeds up to 125 mph, we will rely on the combined strengths of Caterpillar’s Rail Division including EMD and Progress Rail to mark a new era of progress in the passenger rail market.”

”We are very excited to have reached this critical milestone upgrade in our locomotive fleet with the latest state-of-the-art low emission technology,” said Metrolink CEO Mike DePallo. “Metrolink has consistently stayed on the front end of trends as it relates to both environmental and safety technologies, and we are proud to state that this acquisition of Tier 4 locomotives puts us in a leadership position among commuter rail systems across the country when it comes to sustainable operations.”

Caterpillar, Progress Rail, and EMD say they “have taken an enterprise approach to identify the optimal technology that can be applied to locomotives to achieve Tier 4 emissions standards. With the companies’ experience as a worldwide leader in locomotive technologies, EMD will offer Metrolink innovative solutions benefiting fleet performance and satisfying the need for increased capacity. Caterpillar, Progress Rail, and EMD are the only OEMs to have designed and sold new locomotives designed to meet Tier 4.”

As part of the Spirit locomotive procurement and its commitment to clean air, Metrolink will donate up to five EMD F59PH locomotives for alternative fuels research and development programs “in hopes of realizing emissions-free commuter rail operations in the future.” The F59PH and its sister F59PHI were EMD’s final passenger locomotives before it exited the passenger rail market in 2001. The F59PH debuted in 1988; 83 units were built. The F59PHI debuted in 1994; 99 units were built.