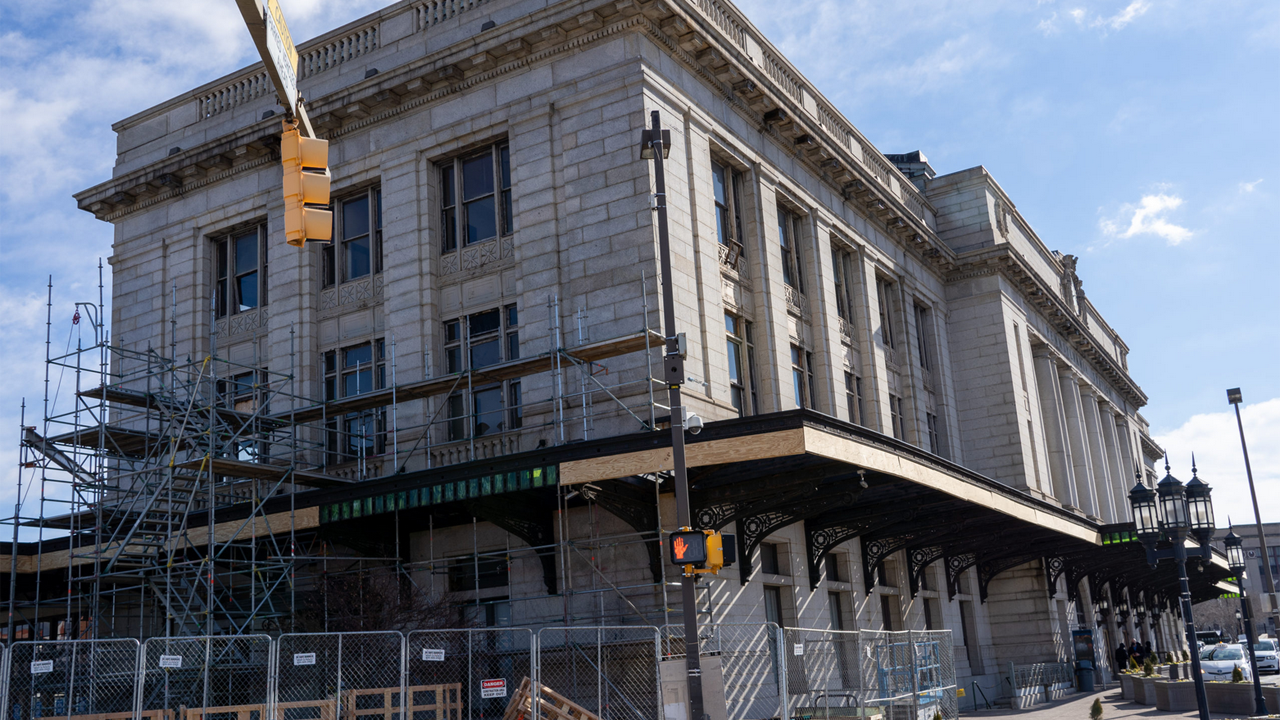 Baltimore Penn Station’s (pictured) last major renovation was completed in 1984 as part of the Northeast Corridor Improvement Project. Pre-pandemic, more than 3 million Amtrak and MARC riders moved through the facility each year. Its redevelopment will better accommodate ridership growth and improve the customer experience, according to Amtrak.

Amtrak and Penn Station Partners on Feb. 24 reported that scaffolding and fencing are going up around the historic Baltimore (Md.) Penn Station on the Northeast Corridor in advance of essential core and shell improvements, tentatively scheduled to begin this summer.

The move follows the partners’ Oct. 22, 2021 groundbreaking ceremony for the station redevelopment and expansion project.

The master conceptual plan first calls for the full historic preservation of Baltimore Penn Station, which was built in 1911. Working closely with Amtrak, the development team will make vital core and shell improvements to the station this summer. These include masonry repairs, existing window refurbishment, a new roof, new mechanical, electrical and plumbing systems as well as updated elevators, stairs and ramps.

The station’s last major renovation was completed in 1984 as part of the Northeast Corridor Improvement Project. Pre-pandemic, more than 3 million Amtrak and MARC riders moved through the facility each year. Its redevelopment will better accommodate ridership growth and improve the customer experience, Amtrak reported.

Currently vacant, the three upper floors of the station will be refurbished for new office use, able to accommodate a single anchor tenant or multiple users, according to Amtrak. New elevators and restrooms are also part of the planned office redevelopment, which is slated for completion in summer 2023.

Just over the tracks from Penn Station, a new station expansion will be constructed on the Amtrak-owned Lanvale lot. It will be integrated with the existing station and include a high speed rail platform. Transit functions, such as ticketing and baggage, will be relocated here, freeing up the concourse level of Penn Station for commercial and retail uses, Amtrak said. Construction of the new station expansion is projected to start this fall.

Since October, Amtrak said it has been working to finish platform improvements at the historic station to accommodate its new Acela high-speed trains, which are scheduled for launch this year. It has already rebuilt a low-level platform into an ADA-compliant high-level platform and constructed a new platform. This work, along with a renewed overhead electrical system and an upgraded 30-mile stretch of track between Baltimore and Washington Union Station, will enable operation at higher speeds, Amtrak said. The railroad noted that the upgrades will also improve on-time performance for high speed train operations.

“Construction will continue in phases to complete the station renovation and expansion over the next few years,” Amtrak reported.

“Amtrak and the Penn Station Partners team are returning Baltimore’s Penn Station to a much-needed state of good repair by making vital core and shell improvements to polish the station’s appearance and increase overall functionality,” Amtrak Executive Vice President, Strategy, Planning and Accessibility Dennis Newman said. “Once it is fully renovated and repurposed, Penn Station will serve as the prominent anchor for all future development that springs up on the adjacent properties while remaining the lively beating heart of the vibrant surrounding neighborhoods. We appreciate the support of Baltimore and the surrounding community during this transitional period as we work together to improve and preserve this treasured landmark.”