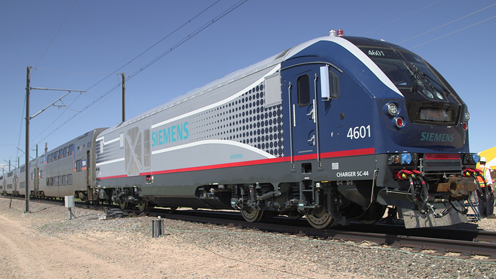 Several tests and validation exercises including maximum speed runs, acceleration and braking and the overall performance capabilities of the locomotive are being conducted to ensure the Charger “is operating and performing as designed and that the locomotive is ready to provide reliable service for passengers,” Siemens said.

The Charger is powered by a high-performance, environmentally friendly, 4,400 hp-rated Cummins QSK95 diesel engine. Designed to operate at speeds up to 125 mph, it is the first higher-speed passenger locomotive to receive Tier 4 emissions certification from the U.S. Environmental Protection Agency (EPA). It obtains an emission reduction of approximately 90% compared to locomotives powered by Tier 0 power plants. An electronically controlled regenerative braking system use energy from the traction motors during dynamic braking to feed the auxiliary and HEP (head-end power) systems to reduce fuel consumption. The locomotives also meet the latest FRA safety regulations, including enhanced carbody structural safety with CEM (crash energy management).

All main components are produced in Siemens plants in the U.S.—traction motors and gearboxes in Norwood, Ohio and propulsion containers in Alpharetta, Ga. The diesel engines are manufactured by Cummins in its Seymour, Ind., plant. Siemens has also established a large base of U.S. suppliers to support production. Transformers and alternators are supplied out of Florida, brake components out of Maryland, HVAC systems out of Nebraska, and steel and fabrication parts out of California and Oregon. Final assembly of the Buy America-compliant Charger takes place at Siemens’ Sacramento, Calif., plant, which is powered in part by solar. 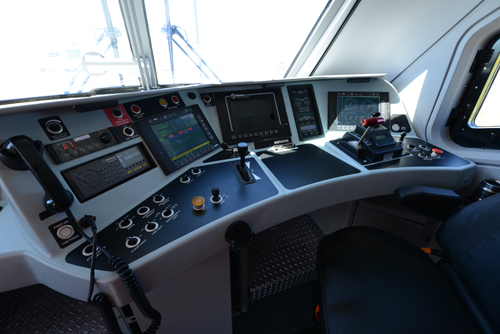 The first Chargers were ordered under a $225 million contract awarded in 2014 by a multi-state coalition led by the Illinois Department of Transportation (IDOT). Since then, options have been exercised by six states including Illinois, California, Michigan, Washington, Maryland and Missouri. In addition, the first Siemens-built trainsets for the new Brightline passenger service in Florida, each powered by two Chargers, will ship this fall. IDOT will receive its first Charger later this year, with additional customers to follow throughout 2017.

“Cummins’ QSK95 is the first locomotive prime mover for single-engine installations to be certified to the EPA’s ultra-low Tier 4 emissions regulations,” said Melina Kennedy, General Manager, Cummins Global Rail and Defense Business. “Not only is it the cleanest diesel engine for locomotives, it also offers large gains in fuel efficiency over non-certified engines currently used in many passenger rail applications.”

“These diesel-electric locomotives truly represent the next generation of clean and efficient rail travel in the United States, and the testing being done in Pueblo is a crucial step in bringing this advanced rail technology to states across the country,” said Michael Cahill, President of Siemens Rolling Stock. “The Siemens Charger not only is the first diesel-electric locomotive to meet the EPA’s strict Tier 4 emissions standards, but it is also a powerful example of what can be accomplished through American manufacturing.”

“These locomotives mark a new era in Pacific Northwest train travel,” said Ron Pate, director of Rail, Freight and Ports for the Washington State Department of Transportation, who traveled to Colorado for the testing. “They will help provide more frequent, reliable and faster service to our Amtrak Cascades customers and also advance our agency’s commitment to offering alternative and sustainable transportation choices.”

“The Charger will provide California’s intercity passenger rail services with a fleet of locomotives that meet very stringent Tier 4 emission standards and that help promote CALTRANS’ mission of a safe, sustainable, integrated and efficient transportation system,” said CALTRANS Division of Rail Chief Bruce Roberts. “The new locomotives are capable of quicker acceleration, higher top-end speeds and will provide passengers with the safety of PTC.”

“TTCI is honored to assist Siemens in qualifying the new Charger locomotive,” said TTCI President Lisa Stabler. “We are happy to be able to provide a testing facility that enables our customers to evaluate their product’s performance in a real-world environment.”