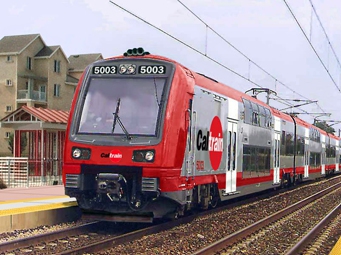 Balfour Beatty and Stadler U.S. Inc., the Peninsula Corridor Electrification Project’s principal contractors, have provided Caltrain with the flexibility needed to survive a deferred decision on a crucial federal grant imposed by the USDOT under pressure from California’s Republican delegation.

Caltrain on Feb. 27 announced that it has negotiated a four-month extension of the March 1 deadline for contractors to begin construction of the Peninsula Corridor Electrification Project while the agency awaits a decision from the Federal Transit Administration about the execution of a $647 million funding FFGA (Full Funding Grant Agreement). Balfour Beatty and Stadler agreed to extend the deadline to June 30.

On Feb. 21, FTA announced that execution of the grant would be delayed until President Donald Trump makes decisions about the availability of funds in the Administration’s upcoming budget proposal to Congress. “The extension is needed to preserve the electrification project’s contracts during this time,” Caltrain said.

The extension, however, “does not come without cost implications,” Caltrain said. “Buying additional time from the contractors will likely require the utilization of up to $20 million in project contingency that otherwise would have been available for construction related expenses in the future. The sooner the grant agreement is executed, the smaller the impact will be to the project’s contingency.”

Caltrain noted that it “has been working with the FTA since 2009 to ensure that the project meets all of the rigorous statutory and regulatory requirements of the Core Capacity competitive discretionary program. The project was rated highly after thorough evaluation including ridership studies, design assessments, financial analyses and cost benefit evaluations by the FTA and the USDOT. Caltrain, as the project sponsor, also has significant local financial support for this project, demonstrated by the project’s substantial leveraging of local, state and regional funds. The federal Core Capacity request makes up only 32% of the total project cost.

Caltrain officials expressed their gratitude to Balfour Beatty and Stadler “for providing additional time and flexibility to manage the unforeseen delay.”

“Every project that has achieved these milestones has received an executed FFGA, and we don’t expect that this project will be any different,” said Caltrain Executive Director Jim Hartnett. “By agreeing to an extension, Caltrain’s contractors have demonstrated their commitment to preserving this unique opportunity to deliver unprecedented improvements to an aging commuter rail system that serves 65,000 riders every day and a project that will put thousands of Americans to work throughout the country.”

In September 2016, Caltrain awarded contracts to Balfour Beatty for construction of the corridor’s electrification infrastructure, and to Stadler for the manufacture and delivery of high-performance electric multiple-units that will increase the system’s ridership capacity and connect Peninsula communities with more frequent service and improved travel times. The contractors have advanced the project’s design and were scheduled to begin construction before FTA announced the delay.

“Caltrain has demonstrated an incredible commitment to the project by navigating these unusual and unique circumstances,” said Balfour Beatty CEO Ray Bond. “The nationwide scope of this project’s merits and benefits has kept this vision alive for over two decades and we are proud to be able to help preserve the opportunity to realize those benefits.”

“This project will not only transform the aging diesel system into a modern and efficient electric commuter rail system better serving the needs of the region, but it will also be the driving force for the creation of a new railcar production facility in the US, that will employ several hundred workers,” said Martin Ritter, Stadler U.S. CEO. “We are excited to keep this project moving forward and appreciate the partnerships with the federal and local investors to ensure that this project, the jobs and plans to build new a facility are realized.”

Caltrain cautioned that additional extensions may not be possible. “Our contractors have agreed to delay construction for the maximum amount of time possible,” said Hartnett. “Delaying a decision on federal funding beyond June 30 will be the same as rejecting the grant.”