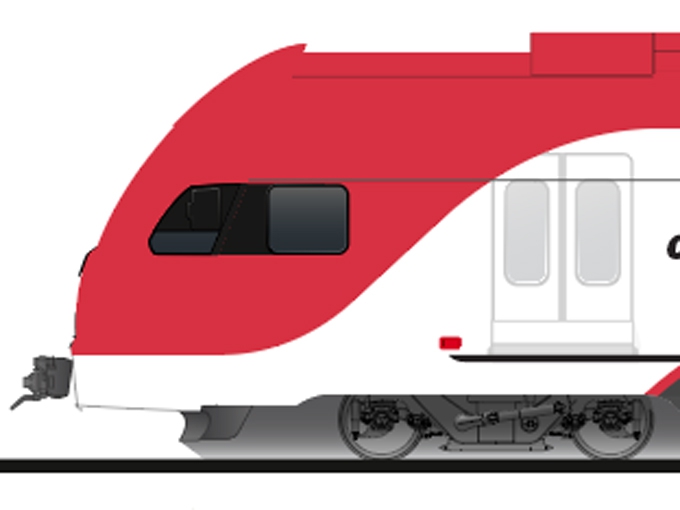 In a recent survey, Caltrain asked customers to select the livery of new high-performance electrified trainsets to be built by Stadler Rail for the Peninsula Corridor Electrification Project.

Approximately 6,331 total votes were cast during an exterior design poll; 42.1 percent of the participants chose Option 1, with Option 3 coming in second place, Option 4 third, and Option 2 last. Option 1 was also the top choice among Caltrain staff. To see the winning design, click HERE.

In May, Caltrain launched the www.calmodtrains.com website “to allow the public to provide input on the look and feel of the next generation of the system’s trains,” the agency said. “Users of the website will learn about some of the new electric train features, including more plentiful electrical outlets, better location and destination information, increased system-wide capacity and the configuration of passenger and bike cars.

“The new website will also allow the public to provide continued feedback on many design options over the next several months, including seat color and bike storage. And next year, after feedback on the design is complete, the site will feature a 360-degree virtual tour of the new trains.”

On May 22, 2017, the Federal Transit Administration announced it will execute an FFGA (Full Funding Grant Agreement) committing $647 million to the electrification project, allowing principal contractor Balfour-Beatty Rail to commence construction.

Caltrain said it “has worked for more than two decades to plan this critical improvement. Over the past few years, more than $1.3 billion was secured from local, regional and State commitments, and contracts were awarded to design, and eventually construct the project. This agreement commits the final funding needed to start construction of a project that will transform and improve the way people travel along one of the region’s most congested corridors. Electrifying the system allows Caltrain to replace the current diesel locomotive fleet with high-performance trains that will increase the system’s overall capacity and will provide faster, more frequent, and more reliable service to communities between San Francisco and San Jose.”

In a related development, the  Federal Railroad Administration  and FTA announced that Caltrain will receive a grant for $21.68 million to equip seven existing Caltrain trains with Positive Train Control (PTC) equipment to enable operations south of San Jose on Union Pacific dispatch territory.