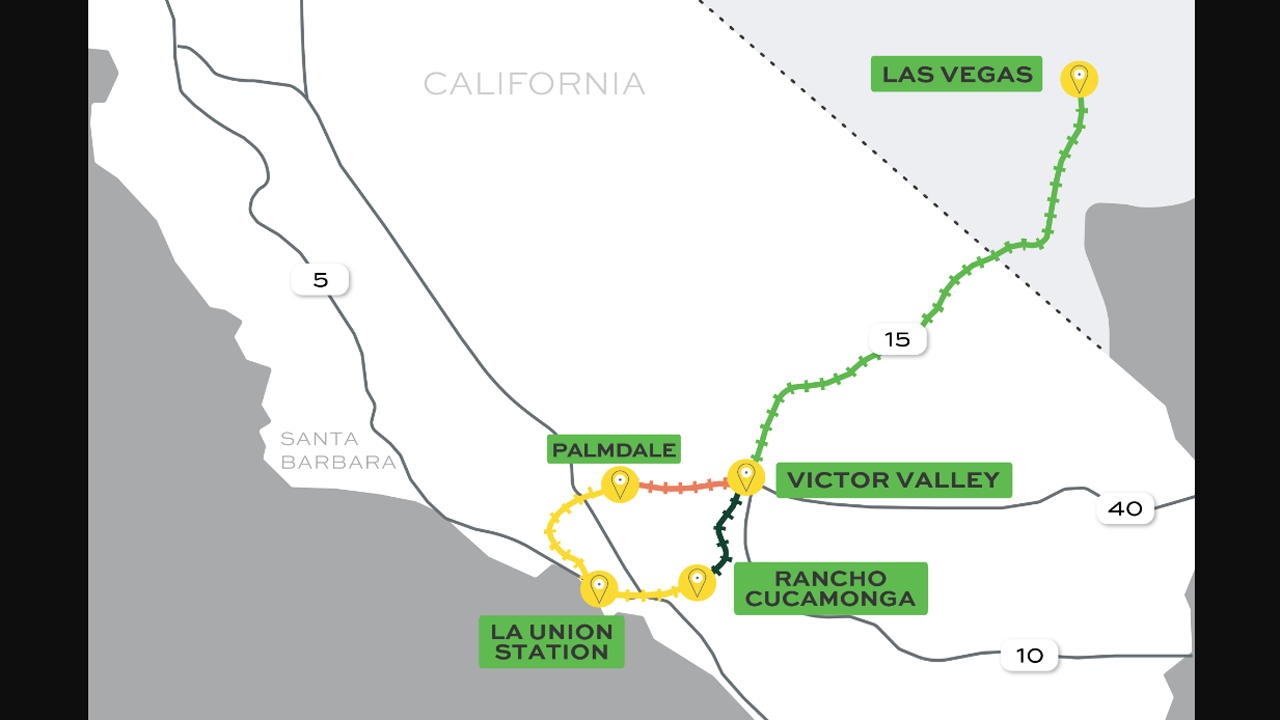 Brightline, the private-sector passenger rail operator that runs a 67-mile line in South Florida, on Oct. 21 reported that it had signed a Memorandum of Understanding (MOU) with the California State Transportation Agency (CalSTA), California Department of Transportation (Caltrans), and California High-Speed Rail Authority. The MOU sets the framework for using 48 miles within Interstate 15 for Brightline West to link its proposed Victor Valley, Calif., station and a newly planned Cucamonga Station in Rancho Cucamonga, Calif., Brightline said.

The city of Rancho Cucamonga is currently designing a multi-modal station as part of a new transit district. That station will include the existing Metrolink regional/commuter rail platforms and a planned underground tunnel to Ontario (Calif.) International Airport. Metrolink offers service from its current Rancho Cucamonga station (adjacent to the planned facility) to Los Angeles along the San Bernardino line.

The MOU follows a 15-day Notice of Intent process that took place earlier this year and allowed for public comment on the project before signature, Brightline said.

“This Memorandum of Understanding marks a critical milestone in our goal to connect the Los Angeles metropolitan area with the iconic entertainment destination of Las Vegas,” Brightline Holdings CEO Mike Reininger said. “This system will provide an optimal travel solution between Southern California and Las Vegas, and opens up the reality of emission-free, hospitality-focused high-speed rail service to millions of people traveling between these destinations every year.”

“In entering into this MOU with Brightline West, CalSTA, Caltrans and the California High-Speed Rail Authority are setting the course for high speed trains to connect Southern California and Las Vegas,” CalSTA Secretary David S. Kim said. “This is an important step in bringing major benefits to the state, including reduced congestion and greenhouse gas emissions on the Interstate 15 corridor and increased connectivity with rail and transit throughout Southern California as well as future connections with the state’s high speed rail system.”

On Sept. 28, Siemens Mobility and Brightline reported that they were in discussions to supply “the current Brightline technology solutions” used in Florida for Brightline West. On Oct. 21, Brightline said the proposed western service “will utilize zero-emission electric trainsets capable of reaching speeds up to 180 mph,” which Brightline projects will reduce CO2 emissions by 400,000 tons each year and reduce vehicle miles traveled by 935 million annually.

Brightline West financing plans are expected to be finalized within the next six months, according to a Sept. 28 Bloomberg report. In June, Brightline decided not to seek state-based private activity bonds in 2021 to help finance construction of the 135-mile California line and 34-mile Nevada line.

In related developments, Brightline reported in July that it had acquired 110 acres of land at the south end of Las Vegas Boulevard for a 65,000-square-foot Brightline West terminal.