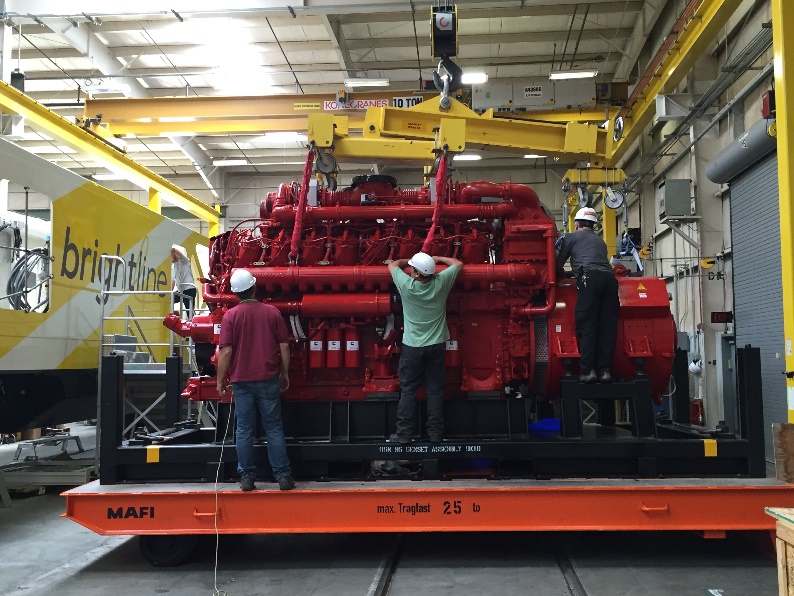 Brightline announced June 28 that it is celebrating another milestone in the building of its trainsets as it installed the Cummins prime-mover into its first diesel-electric Charger locomotive at the Siemens manufacturing facility in Sacramento, Calif. where the trainsets are being built.

The EPA Tier 4-compliant Cummins QSK95 engine weighs 30.5 tons. Installation took approximately six hours, during which the engine was lowered into the locomotive by an overhead crane.

“The fuel-efficient Cummins diesel engine, built in the heart of Indiana, will power the locomotive with 16 cylinders pumping up to 4,000 horsepower for optimum reliability and consistency,” Brightline said. “The lightweight engine is certified to meet the ultra-low emissions required by EPA Tier 4 standards, with additional benefits including reduced noise and the lowest fuel consumption.”

Built as integrated trainsets, Brightline’s trains are comprised of two locomotives and four stainless steel passenger cars. The trains can be extended to include up to 10 passenger cars as the system and ridership grows. “The integration improves ride quality and makes for a quieter ride,” Brightline said. ”There will be a locomotive on each end for high reliability. The locomotives will also feature an ergonomic cab design for the train’s engineers.”

“The 60-acre Siemens rail manufacturing plant is home to nearly 1,000 highly-skilled employees and sources up to 80% of its energy from two megawatts of solar energy,” Siemsns noted. “The plant recently completed a 125,000 square-foot expansion to help accommodate its growing production needs, including the manufacturing of Brightline’s trains. Siemens has also developed a robust and diverse base of U.S. rail suppliers to support the next-generation of rail manufacturing for Brightline, including components from more than 40 suppliers across 20-plus states with additional suppliers still being added. The company will also be performing maintenance on the Brightline trainsets, supporting full-time employment for 36 Siemens employees alongside 40 Brightline employees at Brightline’s maintenance facility in West Palm Beach, Fla.”

The first completed trainset is expected to be delivered to Brightline later this year. Vertical construction is well under way on Brightline’s train stations in Miami, Fort Lauderdale and West Palm Beach, with service scheduled to begin in mid-2017. Brightline service will be operated by Florida East Coast Industries subsidiary All Aboard Florida, using Florida East Coast Railway right-of-way upgraded to accommodate higher-speed passenger trains.