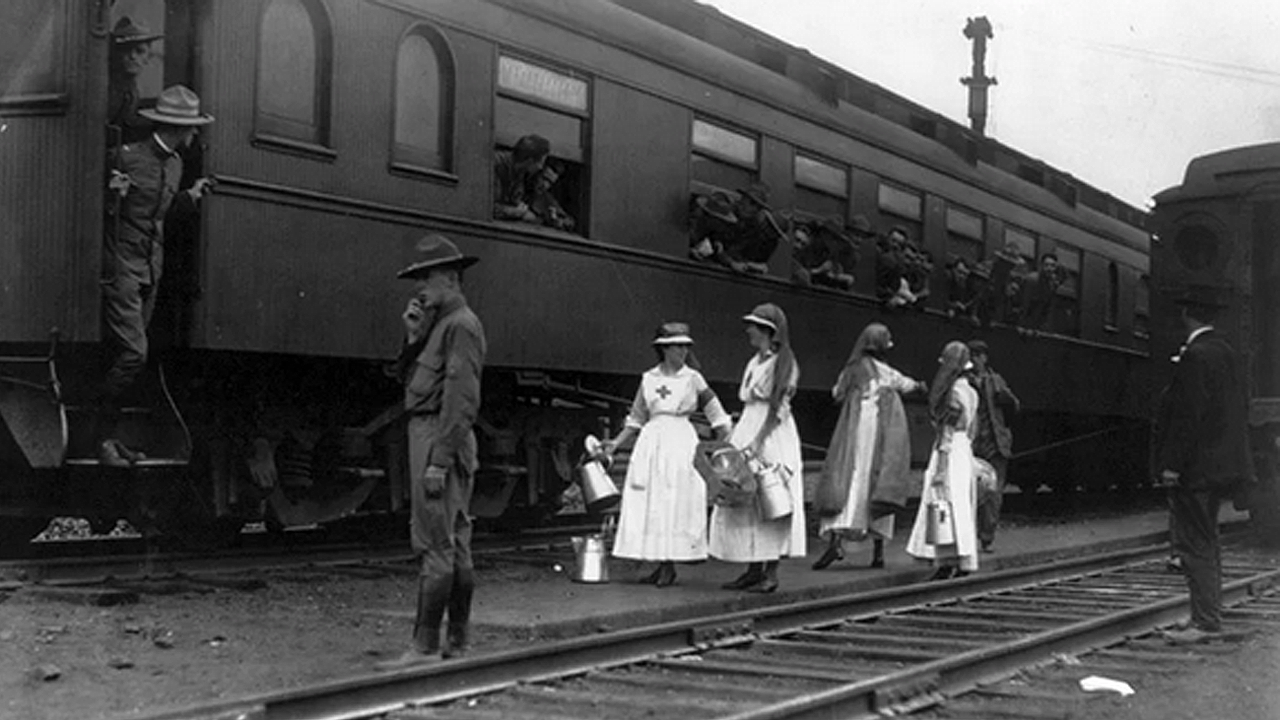 Editor’s Note: In 1918, the world was dealing with a deadly coronavirus pandemic, the “Spanish Flu.” Longtime Trains Editor and Publisher Kevin P. Keefe, now retired and a columnist for Classic Trains, sent me his April 2, 2020 “Mileposts” blog, in which he extensively references Railway Age. It is reposted here with permission, with some added photos. “It’s great to have a 170-year-old magazine around!” he said in his note to me. Actually, it’s 164, but who’s counting? Thanks for the shout-out, Kevin. – William C. Vantuono.

All the worrisome news on the coronavirus front seems unprecedented, and railroads aren’t getting a pass. Railroaders are still out there on the job, delivering freight and hauling passengers, but they are performing in an increasingly difficult environment.

That’s most visible on the passenger and transit side, where empty trains and draconian schedule reductions have rendered busy main lines eerily quiet. Here in Milwaukee, we’re down to two daily trains between here and Chicago, down from the customary seven, and that’s nothing compared to what’s happening to Amtrak and transit service in the Northeast and in California.

Service interruptions are less apparent on the freight side, but the so-called pandemic curve looks like it will catch up there, too. Last week, several industry analysts said they foresee 2020 carloadings declining by anywhere from 6% to 12%. Meanwhile, today’s railroaders—who should be seen as warriors as much as the truckers often featured in the news—face their own workplace risks.

Daunting as this is, it wouldn’t be accurate to call it unprecedented. Railroads faced this once before, and in an arguably more dire historical moment: the 1918 Spanish influenza epidemic, which, according to Centers for Disease Control data, infected an estimated 500 million people worldwide and killed an estimated 50 million, 675,000 in the U.S. alone.

The year 1918 was already a portentous one for American railroads, working hard to support the U.S. effort in World War I. Just before the turn of the new year, in December 1917, the railroads were placed under the authority of the United States Railroad Administration, a de facto nationalization that lasted until March 1920. The timing hit an industry at high tide: In 1920, the U.S. system would see its highest total, 47.3 billion passenger-miles, this just four years after the entire network reached its peak mileage of 254,000 route-miles.

With all this in mind, this week I tried to do some quick research to gauge the 1918 pandemic’s effect on railroads. Frankly, I couldn’t find much. Some of that is because the Classic Trains library is temporarily out of reach due to entirely understandable social distancing policies at Kalmbach Media. References in my own railroad reference books were scant or nonexistent; I could find nothing in Indiana University Press’s normally reliable Encyclopedia of North American Railroads, for instance.

Online searches did yield a number of scattered references, though, some of them intriguing. In Belen, N.Mex., local officials decided that only local returning residents could get off the Santa Fe trains stopping there. Out on the San Diego & Arizona Railroad, a dozen workers building the line through the Carrizo Gorge succumbed to the flu. A 2007 study in the journal Newfoundland & Labrador Studies concluded that passenger trains on the 906-mile narrow-gauge Newfoundland Railway contributed significantly to a deadly second wave of influenza that struck the island in late 1918 and into 1919.

Local leaders in Gunnison, Colo., on the Denver & Rio Grande narrow gauge, took an unusually tough stance. Motoring tourists were instructed to drive straight through town or submit to a quarantine, and passengers arriving on D&RG trains were obligated to go straight into a two-day quarantine.

“Leave it to the trade journal Railway Age to truly put the epidemic in perspective from the industry’s point of view.”

Leave it to the trade journal Railway Age to truly put the epidemic in perspective from the industry’s point of view. Back then, the magazine came out weekly, which says something about the industry’s importance in the U.S. economy. By the October 11, 1918 issue, the editors (led by Editor-in-Chief Samuel O. Dunn) decided it was time to make an exhortation to railroad management, to remind them of their civic responsibilities in light of the national crisis.

The opening lines of the editorial show that the war was still paramount in the public’s mind. “The Kaiser is at his old tricks again,” said Age, dismissing Germany’s latest peace proposal. But the wartime commentary quickly gives way to concerns about public health. The editorial notes that the influenza seemed to be running “almost unabated” in parts of the country, and many cities had closed theaters and other “places of amusement.” Liberty Loan meetings, a fixture during the war, were called off, and a number of colleges postponed the fall semester. In hard-hit Philadelphia, all the city’s saloons were closed, and in New York, business hours were rearranged to relieve congestion on streetcars and subway trains. The editors then spoke bluntly to their audience of executives and managers:

“The danger of contagion is most serious in crowded places. For that reason, it behooves the railways to take every possible measure to the end that they may not serve in any greater degree than necessary as an agency in spreading the disease. Crowding in passenger trains should be avoided as much as possible. The presence of an influenza victim in the midst of a crowd is exceedingly serious. A car added here or there will no doubt help considerably in many cases. Insistence on open windows and ventilators is a positive necessity.”

“Crowding in passenger trains should be avoided as much as possible.”

The editorial’s advice could get quite granular. The magazine recommended that the railroads place signs in coaches instructing passengers to either sneeze or cough into a handkerchief—most people carried one in those days—and urged conductors and trainmen to be assertive about enforcing the rules. Then, Railway Age shifted its focus to a social behavior that, from the perspective of 2020, seems egregious:

“Spitting in passenger coaches is still occasionally seen and is a particular evil in smoking cars. It is not only a most obnoxious habit, but under present conditions is positively dangerous,” the editors wrote. “The present signs in cars on many railroads saying that spitting is against the law are almost a joke. Such signs should explain in far more emphatic terms how obnoxious and dangerous spitting is. Trainmen should be instructed to remonstrate with those who persist in the habit. The situation is exceedingly serious, and no steps should be left untaken to remedy it.”

For some additional insight, I checked in with one of my favorite historians, Clemson University’s H. Roger Grant, who told me that a sign common in depot waiting rooms of the era said: “Spitting on the Floor is Forbidden. All Diseases of the Air are Spread by Spitting.” It was a directive difficult to enforce, he added. Responding to disease wasn’t necessarily new. “Earlier railroads responded to outbreaks of yellow fever, especially in Louisiana,” says Grant.

As my hurried search shows, details about how railroads powered through the 1918 crisis seem hard to find. But it’s clear they were in the thick of it, with hundreds of thousands of their employees—train crews, ticket agents, sleeping-car porters, shop forces—out on the front lines.