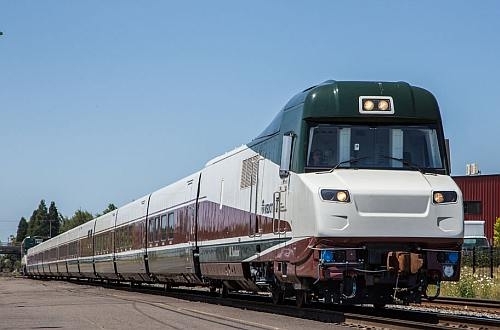 Amtrak's Cascades service between Portland and Eugene will end if Oregon's state legislature enacts the budget adopted by its Joint Ways and Means Committee the week of March 30, 2015 that proposes slashing funding for the daily state-backed service on the corridor.

The Oregon Department of Transportation (ODOT) estimates that it will cost $10.4 million to continue operation over its next bi-annual funding period, which runs from June 30, 2015 to June 30, 2017. This figure was negotiated down from the $20 million requested by Amtrak. Former Oregon Governor John Kitzhaber included a $10.5 million allocation in his budget request before his resignation on Feb. 18 following a misconduct charge.

This was subsequently cut to $5 million in the Joint Ways and Means Committee budget in an attempt to get ODOT to allocate funding directly rather than use general state funds. However, ODOT declared that it would not be able to maintain the existing service at that level of funding. The proposed state contribution to the service is 0.2% of the state’s transport allocation, with Oregon  set to allocate $1.6 billion toward highways in its two-year budget.

Officials have indicated that if ODOT cannot find the funds, alternatives will be sought and that they are optimistic that it will remain operational.

However, if the Cascades service is lost, the Portland- Eugene corridor will only be served by the once-daily Seattle-Los Angeles Coast Starlight despite Oregon investing $38.4 million from 2009 Federal stimulus funds in two 13-car Talgo 8 trains to boost capacity on the Cascades service.

Illinois governor Bruce Rauner has proposed reducing its state subsidy for the state’s four Amtrak corridors from $42 million in 2015 to $26 million in 2016, threatening to cut back the level of service on the routes despite rising traffic and improving reliability. It also places questions over future funding for enhanced services on the Chicago-St. Louis corridor. Work is continuing on the $1.5 billion infrastructure enhancement project that will increase speeds to 110 mph with eight services per day proposed on the route from 2017.

In Indiana, the future of the four-times a week Indianapolis-Chicago Hoosier State service is also in jeopardy following a disagreement between the Indiana Department of Transportation (INDOT) and the Federal Railroad Administration (FRA) over which was responsible for safety.

INDOT argued that FRA’s insistence that the state act as the rail carrier under the proposed partnership between Amtrak and Iowa Pacific Holdings, which included a $200 million liability in case of an accident, was too expensive to keep the service operating and threatened to end the service on April 1.

This deadline was subsequently extended by 30 days and on April 6 INDOT said that it had reached an understanding with FRA under which Amtrak and Iowa Pacific Holdings would assume responsibility for safety with INDOT overseeing this arrangement. The deal is not yet finalized and requires inspections by Amtrak and the FRA as well as U.S. Food and Drug Administration inspections of Iowa Pacific equipment to proceed.

“INDOT and the FRA share the guiding principles of access to safe mobility,” says INDOT commissioner Mr Karl Browning. “Based on these guiding principles, we are both committed to a path toward continuing the Hoosier State service.”