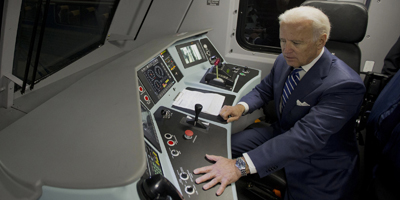 Amtrak’s new electric workhorses, known as the Amtrak Cities Sprinter, are being assembled at the Siemens solar-powered rail manufacturing plant in Sacramento, Calif. The equipment includes parts built from Siemens plants in Norwood, Ohio, Alpharetta, Ga., and Richland, Miss., and nearly 70 other suppliers, representing more than 60 cities and 23 states.

The ACS-64s will become the mainstay of Amtrak’s Northeast Corridor operations, powering all Northeast Regional and long-distance trains, and matching existing trip times at speeds up to 125 mph. Eventually, they also will operate on the Keystone Service linking New York, Philadelphia, and Harrisburg, Pa.

The new locomotives will replace Amtrak’s AEM7 fleet. The AEM7s have between 25 and 35 years of service and average mileage of more than 3.5 million miles traveled with some approaching 4.5 million miles. Amtrak expects to have several more ACS-64s enter revenue service in the coming weeks and then will receive monthly delivery of the remaining units through 2015.

The ACS-64 “is designed for improved reliability and easier maintenance, leading to faster turn-around times and increased availability for service,” Amtrak said. “A state-of-the-art microprocessor system performs self-diagnosis of technical issues, takes self-corrective action, and notifies the locomotive engineer. In addition, there are redundant systems to ensure HEP (head-end power) is maintained to the passenger cars to keep heating and cooling systems working, the lights on, and the doors operational. The locomotives also meet the latest federal rail safety regulations, including CEM (crash energy management) components. Furthermore, the locomotives are energy efficient and use a regenerative braking system to feed energy back into the power grid. Together, the 70 locomotives could save over 3 billion kilowatt-hours of energy and could result in more than $300 million in savings over 20 years.”

Vice President Joe Biden (pictured at left)—an ardent Amtrak supporter who during his days as a U.S. Senator from Delaware logged more than 8,000 Amtrak round-trips commuting between his Wilmington, Del., home and his Washington office—helped unveil the ACS-64 at a Feb. 6 event at Philadelphia’s 30th Street Station. He was accompanied by Amtrak President and CEO Joe Boardman (Railway Age’s 2014 Railroader of the Year), U.S. Transportation Secretary Anthony Foxx, and Siemens USA President and CEO Eric Speigel.

Biden, introduced by Foxx as “president of the Amtrak fan club,” traveled to the event aboard an Amtrak Acela Express train. The Vice President gave an impassioned speech in which he emphasized the importance of the Northeast Corridor and of investing in the nation’s transportation infrastructure. “It’s hard to imagine what life would be like in the Northeast without the Northeast Corridor,” he said. “Fifty percent of the worst highway bottlenecks in the country are in the Northeast. People spend an average of 47 hours per year sitting in traffic jams. That’s $51 billion in lost productivity. The airports in New York and Philadelphia account for 50% of all national flight delays. Criticizing members of Congress who complain about the federal financial support that Amtrak receives for the NEC, Biden said, “The last thing I need to hear from my colleagues is ‘why should we subsidize Amtrak in the Northeast Corridor?’ It’s time to get moving, and Amtrak is on the move. Amtrak is one of the critical elements that’s going to bring America into the 21st Century.”

“Amtrak is integral to the daily life of the Northeast, and our new locomotives will keep the people and businesses of the region connected and on the move,” said Boardman. “New equipment ensures Amtrak can deliver the reliable service the region depends on and supports the growth of the region as America’s economic powerhouse.”

The ACS-64 order, financed by a $563 million RRIF loan, is the largest electric locomotive fleet purchase in the U.S. since World War II. The contract to Siemens for the locomotives was $466 million. The remaining $97 million was for an initial inventory of spare parts and needed upgrades to maintenance facilities to support the new locomotives.