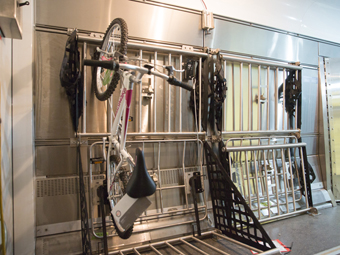 The new baggage cars will be used on all 15 long-distance routes across the Amtrak national system. “The updated design provides for improved reliability and maintenance, and better baggage loading/unloading procedures,” Amtrak said. “Also, the new built-in luggage racks can secure unboxed bicycles to support the growing demand by passengers to bring their bikes onboard an expanding number of routes.”

The field testing program has several elements, including compatibility tests to ensure the baggage car couples cleanly, and can operate through a curve without interference, with numerous types of Amtrak cars and locomotives. In addition, there are tests for speed, stability, braking, noise, wheelset/rail interaction, as well as actual baggage handling. Field testing will continue through October with the baggage car traveling on the Northeast Corridor and on routes to Chicago, New Orleans, and Miami. Amtrak expects these cars to begin entering revenue service by the end of 2014.

The baggage cars are part of a larger order for 130 single-level, long-distance Viewliner II passenger cars, which also include diners, sleepers, and baggage-crew dormitory cars. CAF USA of Elmira, N.Y., is building the cars. “All four car types will modernize the Amtrak fleet, improve reliability and maintenance, upgrade passenger amenities, travel at speeds up to 125 mph, and replace units built as far back as the 1940s and 1950s,” Amtrak said. “The diner, sleeper and baggage-dorm cars will be used on eastern long-distance routes, with the first units of each expected to begin field testing this summer.”

“It is clear that Americans want a national system of intercity passenger rail, and Amtrak is moving ahead to build new equipment to meet customer demand,” said President and CEO Joe Boardman. “Long-distance trains form the backbone of the Amtrak national system, connect small towns to major cities, support local economic development, deliver passengers to state-supported corridor trains, and conduct interstate trade and commerce. Their principal mission is connectivity, and it is an increasingly important one to communities that have been losing their bus and air connections at a steady pace over the past decade. Since 1998, Amtrak long-distance ridership has grown by roughly 20%, without the introduction of any new services, frequencies, or equipment. In FY 2013, long-distance ridership reached its highest point in 20 years, with 4.8 million passengers. In addition, long-distance trains are, on average, as full on the peak leg of their trips as are the premium Acela Express services on the Northeast Corridor.”

Bottom photo by John Sesonske. According to Amtrak spokeman Steve Kulm, “With the launch of the Viewliner II, Amtrak is also launching Amtrak America, a brand that will encompass all that is great about Amtrak’s long-haul trains, including those with sleeper class service. Amtrak’s route brands will continue, and this brand will make overall service offerings clear to our customers and stakeholders. Amtrak America will utilize our Phase Three striping on the Viewliner IIs as a tribute to our heritage. The first cars released from production will also carry Amtrak’s historic logo in honor of our past.”