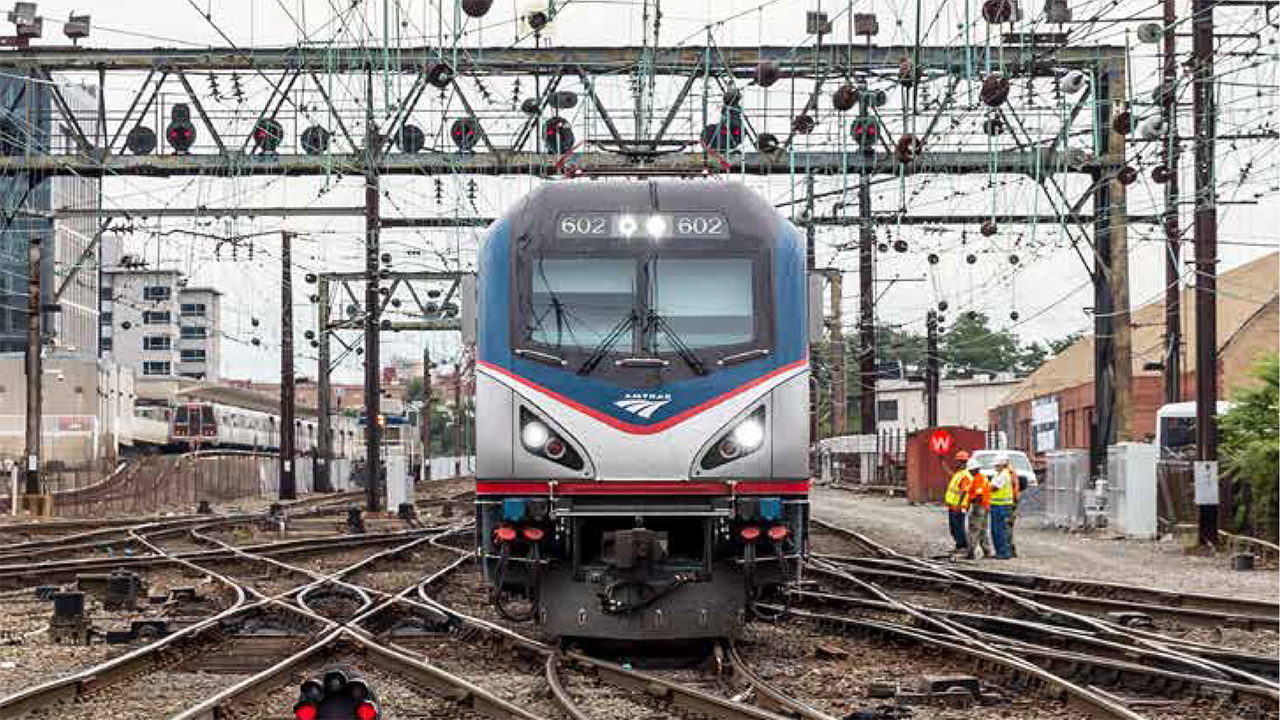 Amtrak has submitted its FY22 General and Legislative Annual Report and Five-Year Plan to Congress and the USDOT. The FY22 Grant Request proposes $3.88 billion for base needs and funding to offset the pandemic’s impacts on Amtrak and its state and commuter partners. In addition, Amtrak has identified $1.55 billion in additional investment necessary to fund what Amtrak calls its “bold reauthorization proposal to improve Northeast Corridor infrastructure and begin advancing new corridor routes across the nation.”

Following are selected reauthorization request highlights and other items from Amtrak’s General and Legislative Annual Report and Fiscal Year 2022 Grant Request, which can be downloaded here:

Railroad Rehabilitation and Improvement Financing Program (RRIF) Improvements: Reform RRIF to promote greater utilization of existing loan authority, including by refunding certain borrowers’ credit risk premia (CRP) that are owed to them by the federal government; covering the CRP costs for certain new loans (similar to TIFIA loans); extending and reforming loan authority for transit-oriented development (TOD), which could benefit both small and large communities; and clarifying that loan proceeds can count toward the non-federal share of a project’s cost for the purposes of federal grants.

Greater Flexibility in How States Can Spend Federal Highway Trust Fund (HTF) Money: Offer states the option of spending a share of their HTF formula funds on intercity passenger rail. Each state could “flex” a percentage of its relevant apportionment up to the percentage of funds in the HTF that are not deposited from user fees.

Amtrak’s NEC Grant – Reauthorize Amtrak’s existing NEC grant at robust funding levels. With increased funding, Amtrak would continue to fund basic renewal of its infrastructure assets as it does today, but we would also address state-of-good-repair (SOGR) backlog and asset improvement issues, which previous inadequate levels of funding over the past 50 years has never allowed us to advance.

All-Electric NEC: Transition all regularly-scheduled intercity and commuter passenger rail service on the NEC main line to electric or other technologically advanced propulsion equipment by the start of FY 2030, with reasonable exceptions. Develop plans, including timelines and funding requirements, to achieve “carbon-free” operations within Amtrak’s NEC territory (making it the first carbonless intercity corridor in the U.S. operated by any mode of transportation) and across the whole of Amtrak’s network.

Temporary Pandemic Risk Mitigation for PRIIA Section 212: Authorize federal funds to Amtrak tohelp Amtrak’s NEC commuter partners with their baseline capital charges (BCCs) if necessary, as states recover from the impacts of the pandemic. This is a similar approach to how Congress provided emergency assistance in FY2021.

NEC Bridges, Stations, and Tunnels (BeST) Program: Authorize a new multi-modal program to fund both the intercity passenger rail and the public transit shares of the major bridge, station and tunnel projects on the NEC. This program would replace the need for Amtrak and transit agencies to separately secure funding through the FRA, FTA and other competitive grant programs to advance these major, shared-benefit projects.

Corridor Development Program: Provide funding under Amtrak’s National Network grant to initiate, operate, improve, and expand high-potential corridor service. Utilizing this funding, Amtrak can use its existing authorities to partner with the FRA, states, localities and others to quickly advance network improvement and growth, augmenting the traditional federal discretionary grant method with an efficient and proven path to network expansion. Under Amtrak’s proposal, the corporation could cover up to 100% of the initial capital and most of the operating costs over a five-year period, after which the new service or frequency would continue under an updated cost-sharing methodology set to be developed by the State-Amtrak Intercity Passenger Rail Committee (SAIPRC) pursuant to Section 209 of PRIIA in FY2022. Amtrak would carry out this program across the nation in close collaboration with states and other partners, in ways that 1) reflected their needs and plans, and 2) give all parties the flexibility to develop and agree to an appropriate division of responsibility, with either Amtrak or its partners leading a given development as appropriate. Relevant processes would be developed or carried out in cooperation with the FRA; plans for development of a given corridor would be subject to final approval byUSDOT. The proposed program could also support increases in service frequency for less-than-daily Long-Distance routes and certain specific investments in corridor service (e.g., new route segments in Canada or Mexico) at no long-term cost to Amtrak’s partners.

Temporary Pandemic Recovery Assistance for PRIAA Section 209: Authorize federal funds to Amtrak for three years to help Amtrak’s state partners cover costs under Sec. 209 of PRIIA; costs have increased due to the COVID-19 pandemic and resultant reductions in ticket revenue.

State Supported Fleet: As part of Amtrak’s National Network grant, authorize sufficient funding for Amtrak to support the ongoing procurement of new single-level trainsets to replace our Amfleet I equipment, which is more than 40 years old.

State Supported Service and SAIPRC Improvements: Make several updates to promote greater transparency and increased stakeholder participation, including: providing for an update of SAIPRC’s existing cost methodology policy; and ensuring that SAIPRC periodically update its goals, objectives and the rules governing its proceedings; explicitly empowering SAIPRC to conduct certain business when DOT and FRA representatives are absent; and other improvements.

Long Distance Customer Enhancement Program: In addition to the aforementioned funding for long-distance service, authorize a separate program to improve the customer experience on long-distance trains. This program would support: Wi-Fi service; experiential food and beverage service; interior refreshes; and enhanced stations, among other improvements.

Preference Enforcement: To better uphold Amtrak trains’ existing right to preference in dispatching on a host railroad’s tracks (essentially, the right to go first when two trains are in each other’s way), authorize Amtrak to bring civil actions against hosts that fail to provide such preference. (Dispatching preference is key to achieving good on-time performance.) The U.S. Attorney General’s existing, little-used authority to enforce preference rights on Amtrak’s behalf would remain in place.

Additional Trains: Create an impartial, clearly defined new process by which the Surface Transportation Board can settle disputes between Amtrak and host railroads over Amtrak’s use of such hosts’ tracks or facilities to provide new or additional service. Such a process would determine whether a proposed use would unreasonably impair freight transportation, and either promptly provide Amtrak with access (if no impairment exists) or determine a remedy for identified impairments, with Amtrak receiving access upon implementation of such remedy.

Positive Train Control: Within five years, require Amtrak and its host railroads to utilize a PTC system or achieve PTC-equivalent levels of safety on all rail lines over which regularly scheduled Amtrak intercity passenger rail trains operate (including in Canada and Mexico) other than rail lines within passenger terminals.

Workforce Development: Include robust funding levels for the FRA’s Research and Development account, and explicitly state that workforce development is an eligible activity in its authorization of appropriations.

“As Amtrak prepares to mark its 50th anniversary of service, we look forward to important milestones on the journey to a modern and growing passenger rail network, such as the arrival of our new Acela and long-distance diesel locomotive fleets and beginning work on the Portal North Bridge project of the Gateway Program in partnership with NJ Transit,” said From Amtrak CEO Bill Flynn in his letter to Congress. “With your continued support of investments like these, Amtrak can play a central role in restoring America’s economic vitality, reducing the nation’s carbon footprint, and connecting underserved communities to the rest of the economy.”