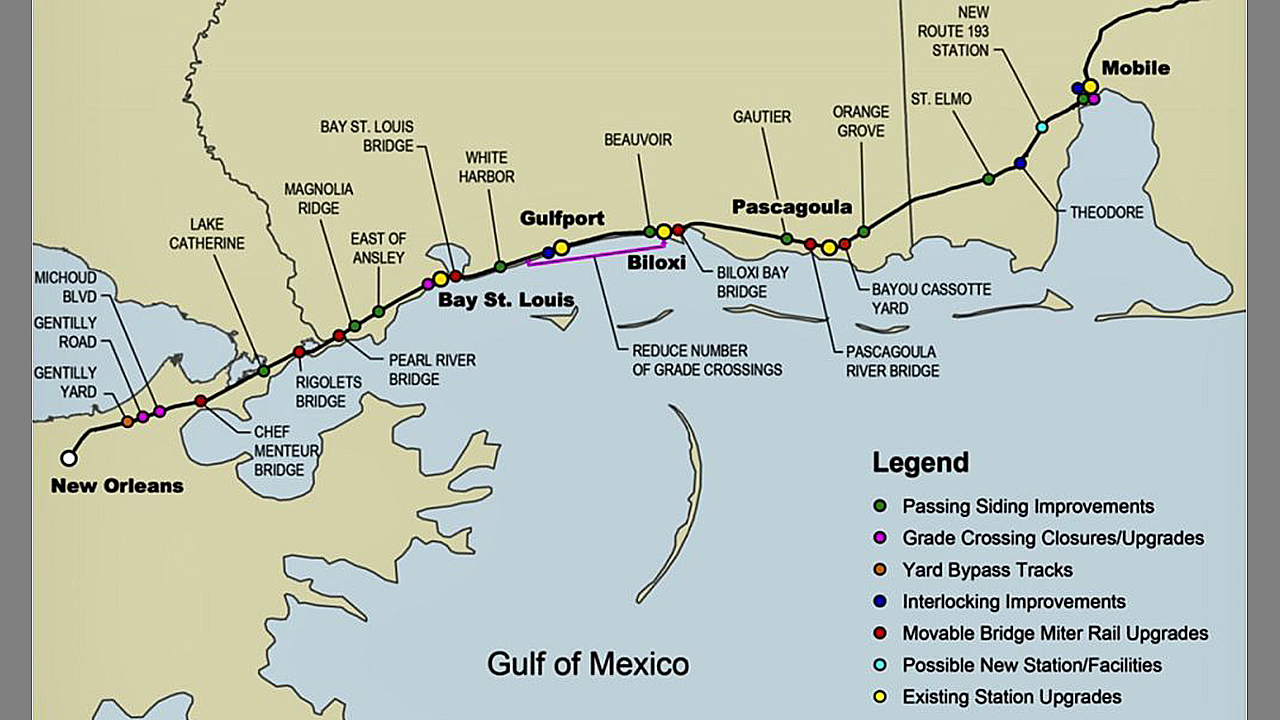 The musical headline What a Difference a Day Makes could apply to this story. On Thursday, Dec. 22, we reported that our efforts to learn about the specific provisions of the grant request that was filed pursuant to a settlement of the dispute between Amtrak on one side and CSX, NS and the Port of Mobile on the other, over future passenger service between New Orleans and Mobile had faced difficulties. At that time, there was only one actual report we could cite.

Then, the same evening, the situation changed. Amtrak spokesman Marc Magliari had advised this writer that, if Amtrak receives a sufficient number of requests through the Freedom of Information Act (FOIA) for a certain document, it posts that document in the FOIA section of the Amtrak website, www.amtrak.com. Late Thursday, the condition had been met, and the document is now available for viewing. There are actually two posts, “Submitted Core Application Gulf Coast” and “Submitted Attachments Gulf Coast.” Both are in PDF format and can be downloaded below. In a sense, Amtrak had given all of us who have inquiring minds and want to know an early Christmas present.

Now it’s time to look at what the documents say, especially the grant application. Of course, our space is limited, so we encourage you to go to www.amtrak.com and examine the documents for yourself.

What the Grant Application Says

The grant application itself runs 54 PDF pages and bears the date of Dec. 2, 2022. According to the Cover Sheet (at 8), the Federal Funding Requested Under this NOFO (Notice of Funding Opportunity), is $178,535,333, while the Proposed Non-Federal Match would be $44,608,834, for a Total Project Cost of $223,044,167. The cover sheet also noted that there had been a previous funding request for a FY2018 CRISI (Consolidated Rail Infrastructure and Safety Improvements) grant, that 75% of the project’s cost would be based in rural areas, and that the project was noted in the 2016 Mississippi Rail Plan, along with “freight-specific elements.” Its Competition ID number is FR-CRS-22-004-101051. There were nine attachments, and future page references will use Amtrak’s pagination.

The opening sentence of the “Project Summary” (at 1) shows that the parties have settled their differences and are now working together to get the grant that would pay for 80% of the costs: “The National Railroad Passenger Corporation (Amtrak) and The Southern Rail Commission (SRC) (collectively, Grant Applicant), with the full support of CSX Transportation (CSXT), Norfolk Southern Railway Company (NSR), the Alabama State Port Authority (the Port) (CSXT, NSR, and the Port, collectively, the ‘Supporting Parties’), and the states of Louisiana and Mississippi (collectively, the ‘Participating States’) are pleased to present The Gulf Coast Corridor Improvement Project (GCCIP or the Project) for consideration under the Federal Railroad Administration’s (FRA) 2022 Consolidated Rail Infrastructure and Safety Improvement (CRISI) Program.”

The document then summarized the scope of the project: “The Project will be a series of infrastructure improvements in the rail corridor from the New Orleans Union Passenger Terminal to the Port of Mobile that will support the introduction of intercity passenger rail, where passenger rail service has not operated since Hurricane Katrina in 2005, while maintaining freight service reliability along the Gulf Coast Corridor (the corridor)” (Id.). After mentioning the projected costs, the document went on to say that the money would: “allow for Project Development (including Preliminary Engineering and National Environmental Policy Act (NEPA) review), Final Design, and Construction to lengthen sidings, extend main tracks, install new switches and turnouts, construct additional crossovers, and improve stations, yards, and grade crossings. Initiating passenger rail service while maintaining the efficiency of freight service along the Gulf Coast will create pathways toward social equity, disaster resilience, regional productivity, employment accessibility, sociocultural exchange, and the reduction of greenhouse gas emissions in the climate-impacted Gulf Coast region” (Id.). Thus, it would serve a number of purposes, some of which were mentioned during the hearings before the Surface Transportation Board (STB).

The document then discussed the history of the SRC and the Gulf Coast Working Group (GCWG), convened by the FRA under §11304 of the Fixing America’s Surface Transportation (FAST) Act, and how the GCWG had recommended the proposed service on the proposed route. Some of the benefits expected from the service were mentioned, including: “This service is also expected to expand Gulf Coast markets for tourism and business travel, reduce I-10 vehicular congestion, improve access to jobs, education, and health care in an area that is predominantly Historically Disadvantaged/Transportation Disadvantaged, and serve as an evacuation route in a region susceptible to storm events.” The Summary portion of the document mentioned the settlement agreement only once, stating: “That settlement agreement included several other terms, conditions, and concessions that work in conjunction with the projects outlined in this application to support passenger and freight service in the Gulf Coast Corridor” (Id.).

Funding for the Project

The next section concerned funding, mentioning the numbers stated above and saying that funding is split 80/20 between the CRISI grant and non-Federal sources. It also gave some detail about a previous grant application in FY2018 for $33 million on a 50/50 match. That money was not obligated, and the SRC is now including those requested funds into the present application, with an 80/20 formula (Id.).

Page 2 contains a table of sources and uses, with construction taking up 88.62% of the total. The other items were engineering (6.00%), Project Management and other Support Services (4.04%), and NEPA (1.35%). The application explained how the applicants and the project are eligible for funding (at 2-3).

The next topic was a detailed description of the project, which began: “This section provides a detailed description of the Project including the Project background and current challenges, the proposed Project elements and scope, its users and beneficiaries, readiness, and proposed performance measures once the Project is complete” (at 3). The big challenges to restoration of passenger service (at 4-5) are the “Complex Freight Corridor” between New Orleans and Mobile, and the “Lack of Passenger Rail Services” since Hurricane Katrina pounded the region in 2005. The report also noted the need for greater resiliency and the difficulties with essentially no non-automobile transportation in the region: “Rebuilding passenger rail service, with an improved structure, will increase individual mobility, create jobs, improve the quality of life, and bring transportation options back to communities impacted by Katrina. This will in turn attract more businesses and visitors, creating a cycle of growth” (at 4). The “Expected Outcome” section (at 5) noted the proposed running time of 3:23 between the two endpoints, “while simultaneously maintaining freight service quality after the introduction of the proposed Gulf Coast intercity passenger trains.” One infrastructure improvement that was mentioned specifically will be longer sidings for freight trains.

Under the subhead “Introduction of Intercity Passenger Rail Service” (at 5), the report listed the benefits to the region that will result when the new trains begin to run. The first one mentioned was connectivity: “This new Gulf Coast intercity passenger rail service will integrate into a vast regional and national transportation network of non-vehicle modes.” The points of connectivity that were listed specifically were the airports in the region, local transit providers, and long-distance trains serving New Orleans. The next benefit was increased mobility for persons who depend on transit or live in one-vehicle households. Other benefits are safety, reliability, shorter trip times, and Amtrak meeting its goal of running at an average speed of 60mph along the route.

The document also mentioned benefits for freight (at 6), particularly on NS’s Back Belt in New Orleans and at Mobile, including the Port of Mobile’s Terminal Railway of Alabama State Docks (TASD).

The next section (also at 6) contains a list of “Expected Users and Beneficiaries.” The list is comprehensive, with ten categories. The include business users (real estate and other businesses), job seekers and tourists, the states and localities where economic development resulting from the trains will enhance tax revenue and economic development, and “low-income residents who do not own a vehicle and older adults who are no longer able to drive.” In presenting this list, the application repeated many of the arguments often made by advocates for new passenger trains and better transit, particularly rail.

Pages 6-12 contain a detailed description of each of 13 project components. The locations of these projects are described at Pages 13-14, and they are shown on a map at the top of Page 14.

While there is not enough space to describe each component in detail in this article, here is a list:

This section (at 14-23) gives detailed information about the benefits of the overall project, as each component fits into applicable selection criteria, which are used for evaluating grant applications. Other provisions concern Project Implementation and Management, Planning readiness, and design issues. While much of that information is too technical to present within the space available, the information is now available for anyone concerned to see by going to the FOIA section at www.amtrak.com.

The main body of the document concluded with a table of “DOT Strategic Goals” (at 25). It summarized the details on Safety, Equitable Economic Strength and Improving Core Assets, Equity and Barriers to Opportunity, Climate Change and Stability, and Transformation. The comment regarding the last-named issue is instructive and appears to act as a two-sentence summary: “All Project improvements will take place to enable passenger service for a region eager to see passenger trains serve their communities again. This Project will not only improve the economy and communities in the region.”

There are also some attachments to the main document. Only a few were reproduced along with it. They include Project Area Diagrams (Attachment H), required FRA certifications, budget information, an “Applicant Financial Capability Questionnaire promulgated by the FRA with Amtrak’s answers, and a Certification regarding lobbying.

This application could prove to be a critical document in Amtrak’s efforts to expand its network of corridor-length routes with state support, as proposed in its ConnectUS plan to add a number of such routes to the existing network by 2035. It was known throughout the time the Mobile matter was before the STB that it is the “test case” for other new services that Amtrak has placed onto the drawing board.

It’s too early to tell whether the settlement that was reached in the matter will clear the track for more such agreements between Amtrak and potential host railroads and other concerned parties to plan for new routes, or whether it will merely move the red signal that would stop other routes from developing and getting needed funds a few blocks down the track.

At the moment, though, signals are green and indications are clear for the construction that will allow the long-awaited trains to run along the Gulf Coast between New Orleans and Mobile for the first time since 2005. With Amtrak’s release of the document described in this report, we now know what Amtrak and the other parties are planning, and we can report some details, as well as how you can get more of them, for the first time. It’s true: What a difference a day does make! 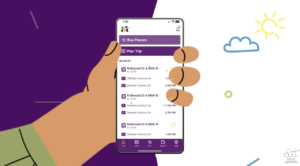