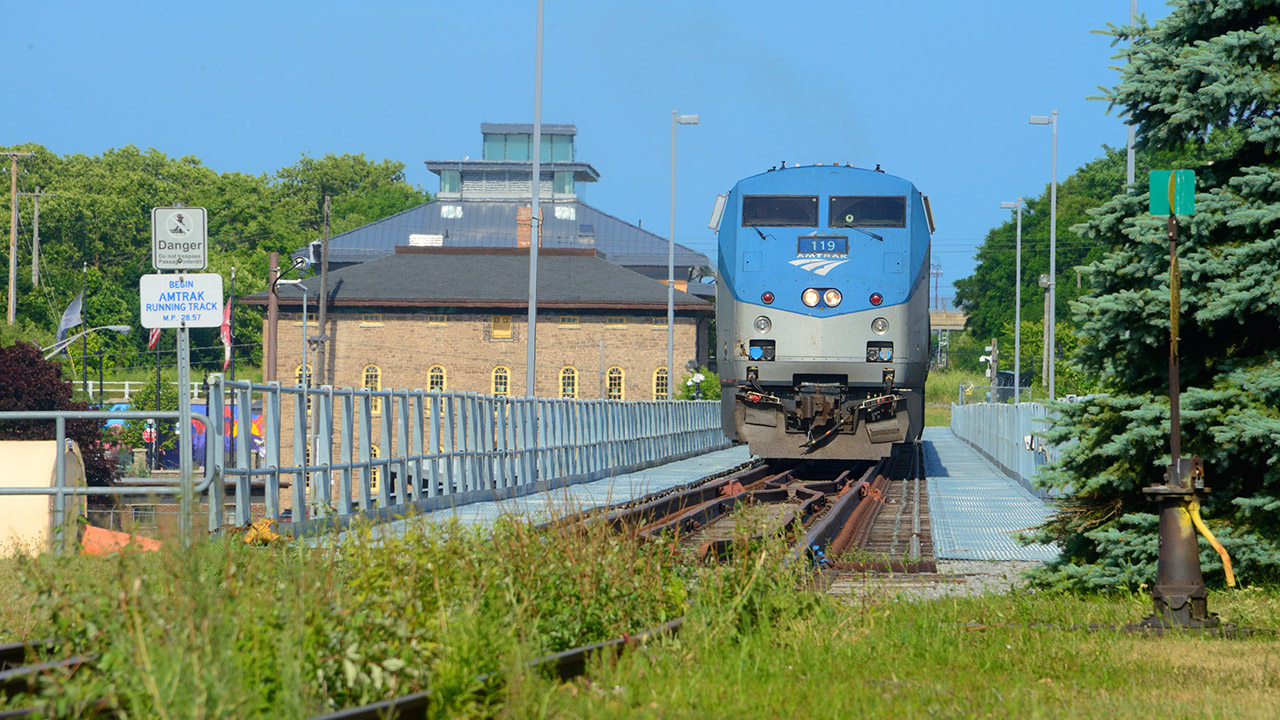 Editor’s Note: Railway Age marks Canada Day, July 1, 2022, by extending greetings and best wishes to all our Canadian railway industry colleagues—freight and passenger/transit railroaders, suppliers, contractors, consultants, contributors—and by reporting on the return of cross-border intercity passenger rail service on Amtrak’s Maple Leaf. Thanks to Canadian contributor Stephen C. Host for the above photo of the Maple Leaf making landfall on the Canadian side of the Whirlpool Rapids Bridge in Niagara Falls, Ontario, Canada, June 30. – William C. Vantuono

International service returned for Amtrak and VIA Rail Canada customers for the first time since 2020 on June 27 as Amtrak, in conjunction with VIA, the New York State and several federal agencies, among the them the U.S. DHS, resumed service to Toronto via the Maple Leaf.

“Amtrak is delighted to welcome passengers back on board the Maple Leaf, connecting New York City and upstate New York with Toronto and Ontario,” said Amtrak Executive Vice President, Marketing and Revenue, Chief Commercial Officer Roger Harris (who becomes Amtrak President on July 5). “On board the Maple Leaf, customers can experience some of the best views in the country through the beautiful Hudson River Valley, New York’s wine country, and the incredible gorges of the Finger Lakes region, before crossing the U.S./Canadian border near the dramatic spectacle of Niagara Falls.”

“VIA Rail is delighted to collaborate with Amtrak in restoring this very important service that connects our two great countries,” said Michael Acosta, VIA Rail Senior Director, Commercial Affairs. “After two years of pandemic, people are eager to travel again this summer, and the Maple Leaf experience allows passengers on both sides of the border to book a beautiful vacation and travel beyond Toronto on VIA Rail trains that can connect them right across Canada.”

Amtrak noted that Toronto-bound travelers “can expect the same amenities onboard on the Maple Leaf as they do on all other Amtrak trains, including free Wi-Fi, Business Class seats, the freedom to use phones and electronic devices at all times (no ‘airplane mode’), the ability to travel with small pets, a café car, large spacious seats with ample leg room, and no middle seat.”

Amtrak added it’s working to restore cross-border service to Montreal and Vancouver and will be announcing details at a later date.

Editor’s Supplemental Note: Yes, I know Railway Age is not a publication that covers model trains, but many in this industry do enjoy collecting and operating them. Below is my O gauge Canadian Pacific Fairbanks-Morse H-24-66 Train Master coupled to my CP N5C caboose. F-M and Canadian licensee Canadian Locomotive Company built 127 of these opposed-piston, 2,400-hp units from 1953 to 1957. CP rostered 21, CN 1. For you “rivet-counters,” the road number on the model is incorrect. CP’s units were numbered 8900-8920. According to Wikipedia, only one Train Master has survived intact: former CP 8905, owned by the Canadian Railroad Historical Association, which operates the Canadian Railway Museum in Saint-Constant, Quebec. Former Norfolk & Western Railway Train Master cab-less slugs survived well into Norfolk Southern service, with one currently preserved at the Reading Railroad Heritage Museum in Hamburg, Pa., where Class II Reading & Northern is based. – William C. Vantuono