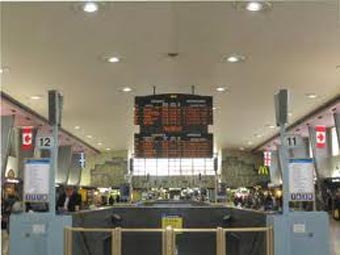 Leahy’s office noted, “A new agreement has been needed before discussions and work on creating a pre-clearance facility at Montreal’s Central Station — and re-establishing train service between Vermont and Montreal — could happen. The agreement is also a positive step for improving the travel experience on the air service between Burlington International Airport and Toronto City Airport.”

Rail advocates in Vermont were quick to react. “We are excited, thrilled, at the announcement today by Sen. Patrick Leahy’s office of the signing of an agreement to allow pre-clearance Montreal Central Station for Amtrak’s Vermonter,” said Chris Parker, executive director of Vermont Rail Action Network, an advocacy group. “The agreement paves the way for the extension of Amtrak’s Vermonter back to Montreal. It is necessary in order to make the train reliable (without a lengthy and uncertain wait at the border). It will be similar to pre-clearance of airline passengers that occurs at Montreal and other Canadian airports.”

Said Sen. Leahy in a statement, “Vermonters and Quebeckers have a long, special and enduring relationship. Many families, like our own, have relatives and friends on both sides of our border.” He added, “Vermont and Canada also are close partners in trade, commerce and tourism and as joint stewards of our shared communities. Both nations are striving to ensure that our border is secure.

“This agreement has long been a goal, and a dream, for Vermonters who have fond memories of rail trips to Montreal to enjoy all that its vibrant cultural capital has to offer,” said Leahy, adding, “This is also a win for visitors from Canada’s largest cities who are eager to visit Vermont to ski, shop, and dine. I commend Secretary Johnson and Minister Blaney for their commitment to forging this agreement that will greatly benefit the economies of our state and nation.”

But, Parker cautioned, “The agreement must become law in both Canada and the U.S. to have force, so we will have more occasion yet to be grateful to our [congressional] delegation.” He added, “Challenges still remain. An operating agreement with CN is required — at a reasonable price, and U.S. crews need to be able to run right to Montreal. These were challenges which led to the end of the former Montrealer, but we believe they can be resolved. We are particularly hopeful because of the support of the Quebec government.”

Asked for additional comment by Railway Age on Monday, Parker expressed optimism, saying, “Besides [being] good news for passengers, the pre-clearance deal means passenger trains won’t be sitting on the main blocking freights. And passenger trains should strengthen commerce between Quebec and Vermont.”

Parker also said any pre-clearance procedure put in place for the Montrealer would also likely benefit the Adirondack as well, noting New York officials, including Sen. Charles Schumer (D-N.Y.), have been assisting in the effort.