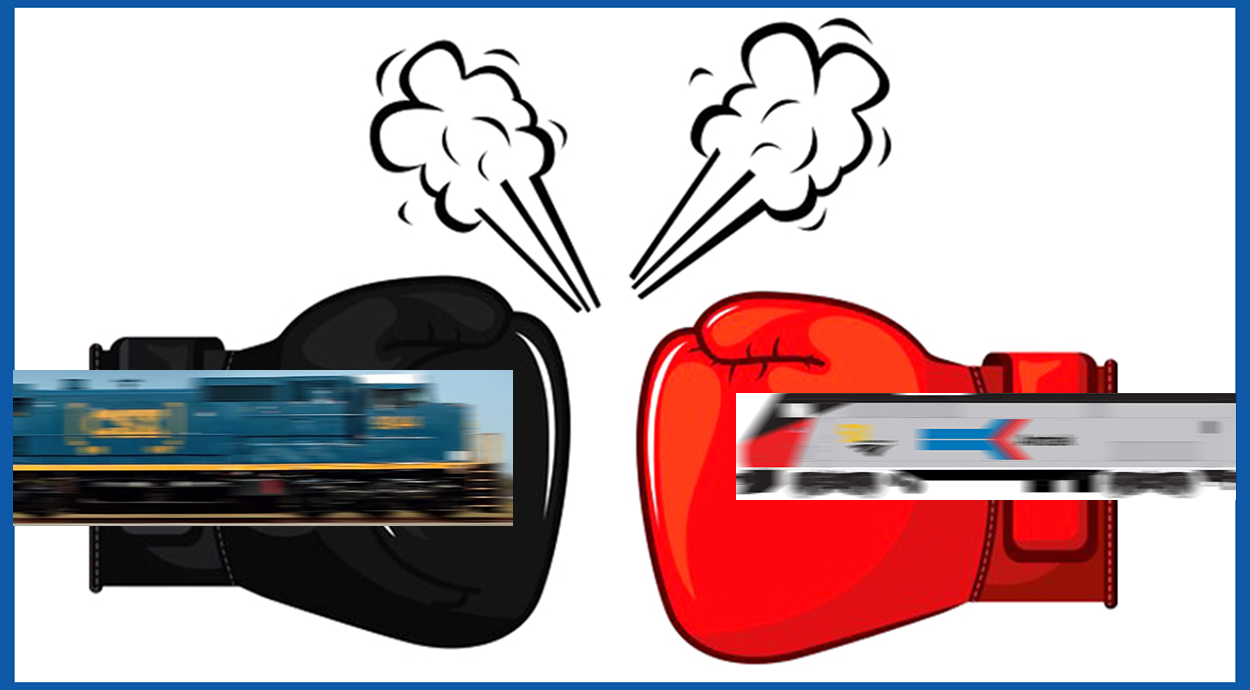 The “Second Battle of Mobile” is in full swing. Prospective host railroads CSX and Norfolk Southern, along with the Port of Mobile, are in a hearted dispute with Amtrak at the Surface Transportation Board (STB) about how much infrastructure must be built between New Orleans and Mobile before Amtrak will be allowed to run two daily round trips between those cities.

In a nutshell, Mississippi wants the passenger trains while Mobile, and Alabama generally, don’t. CSX, NS,and their allies would be willing to allow the passenger trains to run, but only if CSX gets a lot of infrastructure improvements along its New Orleans & Mobile (NO&M) route and NS gets some on its Back Belt through the Crescent City. Just how much will be required is what this battle is all about.

This report covers three days of STB hearings held on April 8, 12 and 14. They followed Round 4, which featured senior managers from CSX and NS, along with the consultant who supervised the modeling effort: Ricky Johnson from CSX, Randy Hunt from NS and Charlie Banks from R.L. Banks & Associates. They kicked off the hearings during the first week of April, and we reported to you about that round on April 8.

In his testimony, Banks introduced Rail Traffic Controller (RTC), a computer-driven tool for simulating how much traffic can run on a rail line, given a specific set of conditions, which can be varied. If the desired traffic can run on a certain set of infrastructure and operating conditions, the required operational condition is met. If not, it is necessary to reduce traffic or increase capacity. That is usually done by adding infrastructure projects until the line can run the desired level of traffic. If it’s a close call, it’s possible to tweak the operation a bit to get the desired result.

That was the introduction. Then it was time to get into the weeds, as those of us who had the sleeplessness or the fortitude to sit through the next three days of hearings found out. The proceedings had the flavor of a “battle of experts,” a sometimes-critical and often-dull component of a trial. The experts before the STB were those who ran the model for CSX and NS. The managers who supervised the simulation for the railroads were on the program, too.

In essence, the battle was fought between the model’s proponents and those who are skeptical of its ultimate effectiveness, but who were not represented at the hearing. There was no competing simulation; all three days were about RTC.

For the “techies” among you who want to join the modelers in the weeds, you can replay all of the proceedings on the STB YouTube channel.

Hannah Rosse, former Director of Service Measures for CSX, led off on April 8. She described the RTC model and discussed how the simulations she had done included passenger trains. She said that the inputs for the simulation included train profile, “on-station” (location) and dispatch data. She also said that the model could distinguish between a scheduled train and other types of occupying movements, like a locomotive running light, and she accused Amtrak of having a “misunderstanding of railroad operations.”

The simulation at issue modeled freight operations on a 2019 baseline and a 2039 scenario that assume 2% growth per year in freight traffic, an assumption that STB Chair Martin J. Oberman questioned. Rosse said the 2019 simulation would run with the passenger trains and no gridlock, but there would be significant delays to freight.

Holly Sinkkanen, Manager of Strategic Capacity at NS, was next. She said the purposes of the model were to evaluate growth, support the railroad’s passenger policy and determine the effects of operating changes. She also claimed that Amtrak’s criticism was inaccurate and maintained that adding the proposed trains on NS’s Back Belt in New Orleans without the infrastructure projects requested by the railroad would “severely impact our interchange partners.”

The session ended with Sinkkanen’s direct examination, and the April 14 session started with her on cross. There were issues raised about whether the model reflected actual train performance, whether schedule times are fully accurate, and whether a growth projection for 2039 was reasonable.

During his cross-examination at the beginning of the hearing, Banks often said to “ask Mark Dingler” or “ask Larry Guthrie.” Both were on the program, and Dingler, Senior Project Director for HNTB and the modeler for CSX, was next. Comparing the computer in the simulation to a human dispatcher, he said the computer knows exactly how long everything takes, but a human dispatcher is more risk-aware. He also said that the program can model hypothetical situations, which he argued is its strength.

Dingler called for 11 projects that he alleged CSX would need to run its freight with no adverse effects along with the proposed passenger trains under the 2019 simulation, and three more under the 2039 simulation, claiming that each project was designed to relieve congestion at a specific place. During the Thursday session, there was also mention of 12,000-foot passing siding that CSX could want by 2039, a feature that could never reasonably be ascribed to any passenger train. When asked how he validated the data he received, Dingler replied that he trusted it.

The final witness in the series was Larry Guthrie, who had worked with Charlie Banks on the RTC modeling in question. In his long career, Guthrie had done modeling for NS on projects that involved passenger trains, and said the model would “measure the need for planned infrastructure.” His method was to start with the base case, add the passenger trains, and then add infrastructure, presumably enough to make the model run. Regarding Amtrak, Guthrie said Amtrak’s proposal would cause “gridlock” and prevent freight operations from remaining fluid.

That may have been the reason why a proposed 8,500-foot extension of the Freight Lead on the NS Back Belt in New Orleans became part of the program. There seems little doubt that such a project would add considerable flexibility to operations on that busy interchange line. Still, is it appropriate for NS to claim that the railroad can live without that improvement, with the obvious benefit, just to make somebody else pay for it? The STB is tasked with answering many questions like this.

Throughout the hearing, there were questions raised about the model itself, especially, about the numbers it produced. Would 19 minutes of additional delay per train on the Back Belt actually result in 13 hours of daily delay on the line? Was it necessary, or even useful, to assume conditions of 95% on-time performance for passenger trains with no adverse effects on freight and no requirement that any freight schedules be changed? Did it even make sense to assume a growth rate for freight traffic and ignore prospective changes in passenger traffic, given recent high variability of just about everything?

Dingler modeled a 3,000-foot station track in Mobile, although it could be very difficult to find room for such a long track at that location. There are also no passenger trains anywhere on Amtrak that would need a station track that long, and the proposed trains would probably run four-car consists with one unit. It would be much easier to fit a station track about 600 feet long into the available property. Maybe it could be used as a layup track, too.

Financial analysis was not part of the model, so there was no means for measuring the cost-effectiveness of each project.

Is there a way to get the proposed trains started without building the 11 projects that Dingler’s model called for and completing them in advance? Add the other three for 2039, and the cost rises to $440 million, with an additional $84 million for the Freight Lead Extension on the Back Belt. This total far exceeds what the FRA had recommended. Can CSX and NS be persuaded or directed to make accommodations of their own, especially if the cost of a specific project is low and the aggregate cost is high, and the host railroad would gain some benefit, too?

STB Chair Oberman continued to ask probing questions. He asked Dingler if CSX wants to run freight trains that are too long for the passing sidings, with or without passenger trains sharing the line. He also asked if adjusting the lengths of such trains would mitigate delays. He said on April 14 that he “was not afraid to change precedent if it’s warranted” and continued to stand his ground on evidentiary issues. He and his Board colleagues seem to have the proverbial “inquiring minds that want to know,” and they don’t hesitate to inquire.

At this writing, the Port of Mobile presented its two witnesses on April 18, and Amtrak started its side of the case the following day. The next two hearing days are now set for May 9 and 11. We expect to report on them soon. In the meantime, we will have a report from the Mississippi Gulf Coast about the towns and locations where the proposed trains would stop.

Stay tuned. There is a lot more to come.