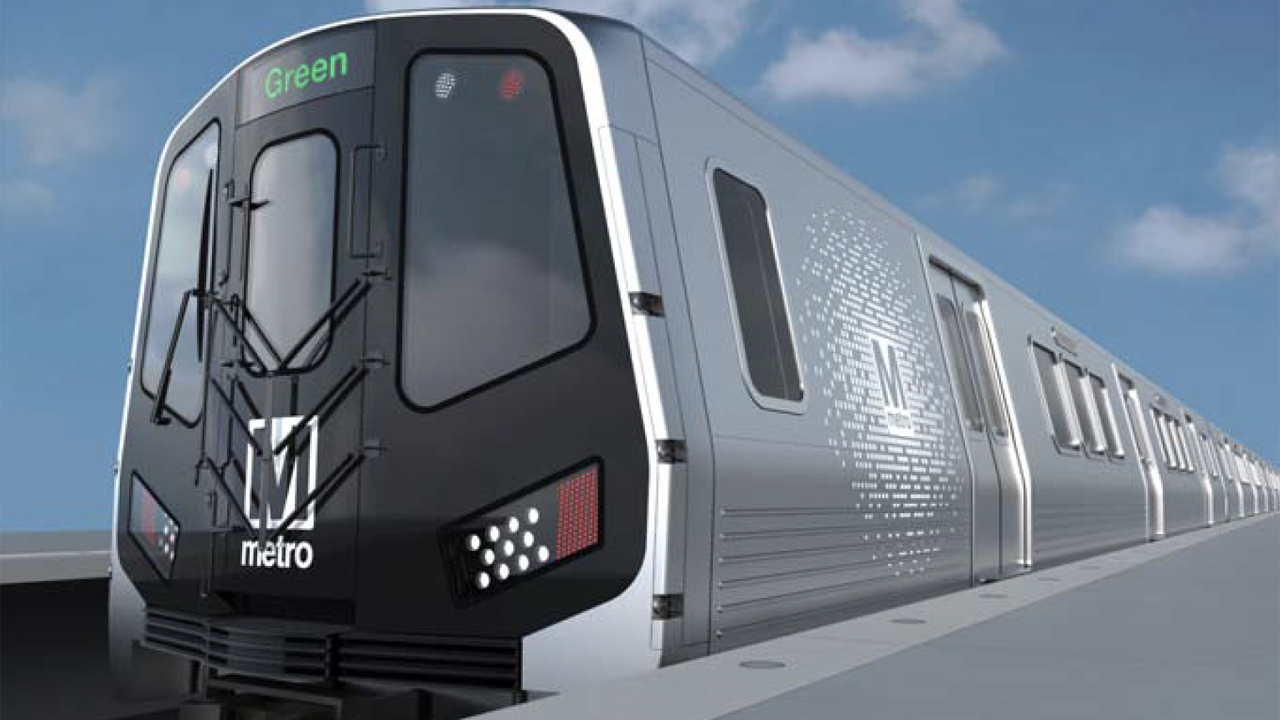 Pictured is an artist’s rendering of the new Hitachi Rail 8000-series railcars for WMATA, which will be built in Maryland.

Hitachi Rail on March 21 reported that it will build a $70 million factory and test track in Washington County, Md., with operations commencing in winter 2023/24. Its first order for delivery: a new fleet of 8000-series railcars for the Washington Metropolitan Area Transit Authority (WMATA).

WMATA in 2021 awarded Hitachi a contract to design and build an initial order of 256 8000-series rapid transit cars, which will replace aging 2000- and 3000-series cars that have been in service since the early 1980s and were manufactured by Italian firm Breda (now Hitachi Rail Italy). If all options in the contract are exercised, a total of 800 cars will be supplied to the agency, worth up to $2.2 billion. Hitachi announced last year it would manufacture the car body structure, fit out the trains, and carry out final assembly at a new Washington area plant, with initial pre-series trains expected to be delivered in 2024.

The car builder has now announced that the facility will be located on a 41-acre plot in the greater Hagerstown, Md., region, near the Hopewell Valley industrial park. It will be 90 minutes from WMATA’s Greenbelt Rail Yard, where the completed railcars will be delivered. Once land grading is completed this fall, construction will begin. The facility is expected to produce up to 20 railcars per month on a single shift once it is fully operational.

The 307,000-square-foot factory building will include a large production area, warehouse and main office, and an 800-yard test track will allow dynamic train testing on site.

“Around 60% of the construction value of the factory is expected to be spent with suppliers from across the region, which equates to more than $40 million,” according to Hitachi. “Small businesses are expected to benefit, too, with more than a quarter (27%) of the total expenditure anticipated to go to Small Business Enterprises (SBEs).”

Hitachi already has manufacturing facilities in Miami, Fla., as well as in Japan, Italy and the U.K. It has headquarters in Pittsburgh, Pa.

“I’m delighted to confirm the location of our new state-of-the-art U.S. train factory in Washington County, Md.,” Hitachi Rail Group CEO Andrew Barr said. “From here, our 460 strong American workforce will build a fleet of modern metro trains and have the capability to build trains for towns and cities across North America.”

“With this new facility, Hitachi Rail will be creating hundreds of critical manufacturing jobs in our state with the capability to serve the wider North American market,” Maryland Governor Larry Hogan said. “We are excited to work with the company on this transformative project and look forward to its continued success in Maryland.”

“This new factory in Hagerstown will deliver good-paying jobs to the community and strengthen our public transportation options across the entire Metro [WMATA] system,” said Congressman David Trone (Md.-06), a member of the House Committee on Appropriations.

In related developments, Hitachi Rail on Aug. 4, 2021 reported that it would acquire Thales’ railway business. Also, WMATA General Manager and CEO Paul J. Wiedefeld announced in January 2022 that the agency’s 7000-series rapid transit cars—built by Kawasaki Rail and comprising about 60% of WMATA’s railcar fleet—will be out of service until April, as it acquires technology to measure the cars’ wheelsets, which have been under inspection since an Oct. 12, 2021 Blue Line train derailment. Kawasaki supplied 748 7000-series cars between 2010 and 2019, which replaced 1000- and 4000-series railcars.