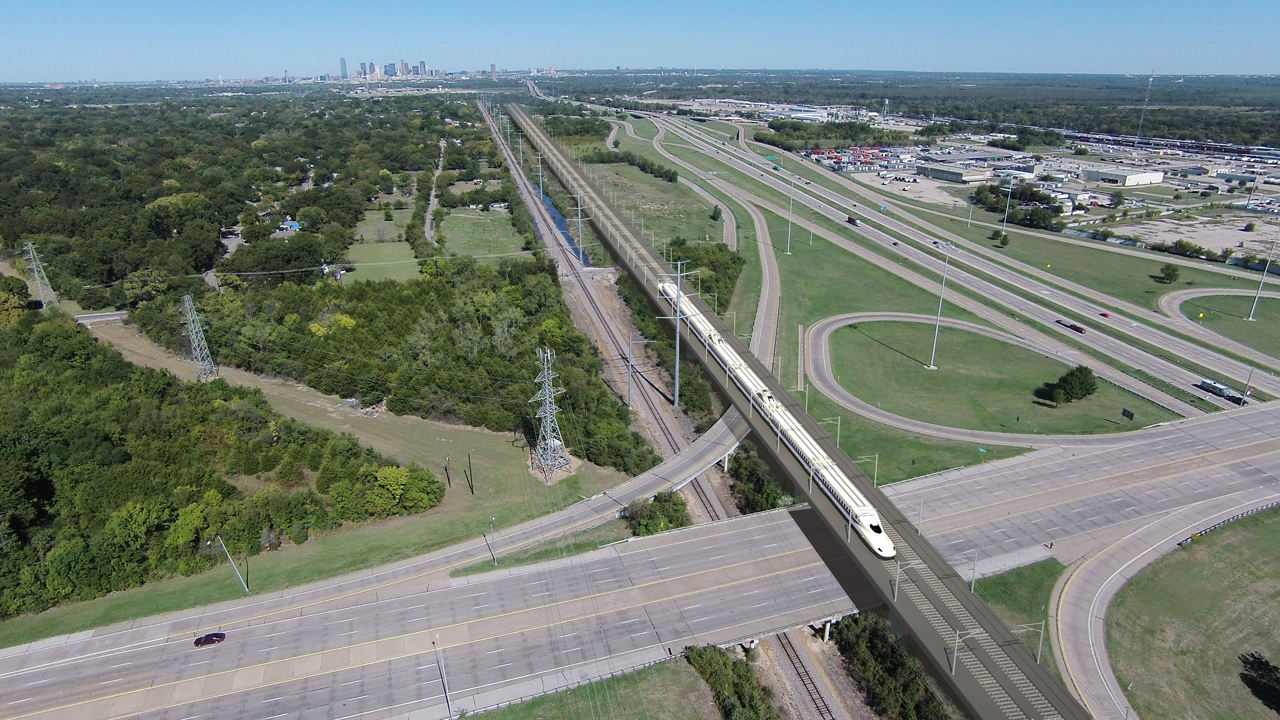 Now that approvals and permitting have been secured from the Federal Railroad Administration and State of Texas, “terminal development is the next step,” high-speed rail hopeful Texas Central said on Oct. 13, when its announced formation of the Texas High-Speed Rail Station Development Corporation (SDC). Meanwhile, two Texas Republican congressmen have sent a letter to the USDOT accusing Texas Central of attempting to engage in questionable business practices.

SDC is described as “an entity that will develop train stations in Dallas, Houston and Grimes County near College Station, where the permitted high-speed rail line terminals will be located.” It will “be independently owned by a consortium of Texas investors and separate from Texas Central.”

Cadiz Riverfront Holdings and Cadiz Development Houston LLC will form SDC and be led by John Kleinheinz and Jack Matthews. The group owns approximately 52 acres in the Cedars neighborhood just south of downtown Dallas, approximately 45 acres in Houston formerly known as the Northwest Mall, and approximately 59 acres in Grimes County, near College Station. The parcels of land owned by this group “include the sites of the future Texas high-speed rail stations, as approved by Federal and State authorities and the surrounding developable acreage,” SDC said. The company will develop the parcels of land owned by Cadiz Riverfront and Cadiz Development. SDC will undertake planning, designing, development, construction, improvement, commissioning, operation, maintenance and funding of the terminals, station sites, platform surfaces and circulation area, and “will engage with state, local and federal governmental agencies and private companies seeking to deliver high-speed rail to Texas.”

“Our high-speed rail project connecting Dallas and Houston will be as transformational to Texas as DFW Airport was to the region when it was opened in 1973,” said  Kleinheinz “Texas Central will be the blueprint for national high-speed rail, a solution for environmentally efficient transportation. As this first high-speed rail project comes online, Texas is positioned to lead in discussions about a national rail strategy with the local and federal stakeholders. Texas Central is moving toward a consensus on how to finance their technology deployment along the Dallas/Houston corridor. The U.S. and Japanese governments have an excellent, long-term history of working together on strategic projects, and we are optimistic they will reach a mutually beneficial understanding. These station assets will be an integral part of the system when financing for the Tokaido Shinkansen system is finalized. If a solution involving the Shinkansen system cannot be reached, our station sites will be used to make sure high-speed rail comes to Texas and integrates with the rest of the nation, using the best technology offered.”

“We have invested substantial time and energy to advance high-speed rail between Dallas and Houston and Grimes County near College Station,” said Matthews. “We do not intend on missing this opportunity for the people of Texas. To keep this positive momentum, we will begin discussions with various third parties who have successful experience with high-speed rail.”

Those “various third parties” were not named.

“Texas Central Railroad has yet again reneged on their promise after vowing for years to not seek federal funding for their proposed high-speed rail project,” said Brady. “Taxpayers should not be left on the hook for boondoggle projects that never come to come to fruition. I will always fight to protect federal taxpayers—not only in my district, but across America—to make sure our constituents aren’t stuck holding the bag when rail projects default on their loans.”

“Texas Central has failed to acquire the capital required to fund their project privately. They have been unable to acquire the funding through the Texas Legislature. And now, they turn to the federal government to bail them out,” said Ellzey. “We should not be spending taxpayer dollars on a project that was supposed to be fully privately funded. But more important, the American government should not be giving a foreign company funds to take land away from its people. If completed, the high-speed rail project will be devastating to Texas’ farmland and ranchland. I-35 and I-45 provide economic stability to the communities and businesses along their corridor. I am proud to stand with Congressman Brady in pushing back against this project.”

In the letter (downloadable below), the two wrote:

“The $12 billion loan [Texas Central is] seeking would not only be the largest RRIF loan in the program’s history, but would consume more than one-third of the total sum allocated to the program. We are concerned with Texas Central’s ability to skirt Buy America requirements, inflate ridership projections, and obtain federal loans without authority to construct, which will leave the American taxpayer on the hook. Should Texas Central pursue federal assistance, [we] encourage DOT to consider the alarming facts of this project.

“It would be a misuse of taxpayer dollars to provide a federal loan to Texas Central without approval from the STB. Although Texas Central claims it is in ‘execution phase,’ many critical steps have not been taken, and important questions about the financial feasibility of this project remain unanswered. Texas Central claimed they would never ask the public to subsidize their project, and now it is essential.”

In response to a Railway Age inquiry regarding Ellzey’s and Brady’s claims of Texas Central HSR being “dangerous” and “non-interoperable,” Washington, D.C. based lobbying firm Trilogy Advisors (which sent a copy of the congressmen’s letter to Railway Age) responded as follows:

“In April 2019, Union Pacific submitted testimony to the Texas House of Representatives subcommittee on high-speed rail detailing how the non-interoperable incompatibility between low-voltage Union Pacific freight lines and high-voltage proposed high-speed rail lines meant that public and passenger safety would be severely compromised for at least 20 miles of parallel tracks where the proposed high-speed rail system is installed within 20 feet of Union Pacific freight lines. Union Pacific testified that ‘freight railroad signaling and traffic control systems—the systems that drive basic operating and safety functions, like gates at railroad crossings—depend on the absolute integrity of low-voltage current that flows through our tracks. Texas Central proposes to operate a high-voltage system in the 20-or-so feet between the edge of Union Pacific’s right-of-way and Houston’s Hempstead Highway. This close proximity along more than 20 miles of existing freight operations creates a high risk of electromagnetic interference. TCR has not shown any progress toward\ addressing this fatal flaw. It must be addressed before any construction begins.’

“Union Pacific considers this a ‘fatal flaw’ in the high-speed rail design. Union Pacific engineers and safety experts also warned of massive high-speed rail structures that would be built in limited space along Hempstead Highway, reducing motorists’ ability to see and react to oncoming trains along the entire Hempstead Highway corridor. For these reasons, Union Pacific has not yet given its support to this proposed project. Negotiations started between the two companies years ago have been dormant for the past year and half. From a political perspective, given that Texas Central is seeking a $12 billion RRIF loan, there will be far less political support for such an unprecedented loan to a private company that has nearly zero assets. The highest ever RRIF loan was $2.45 billion, to Amtrak. Federal lawmakers and regulators will want to direct rail financing to those lines that will expand the national rail network, not exclude it.

“You [pointed out to us] that ‘Dangerous’ is dead wrong. The Japanese Shinkansen has operated since 1964 with zero accidents and injuries.”

Yes, if Shinkansen would be the operator of the system, I would fully agree with you. But Texas Central has hired the Spanish firm Renfe to operate this system—Shinkansen will not be the operator, merely providing the rolling stock and tracks—and Renfe has no experience operating a Shinkansen system, nor does it have a perfect public safety record, to cite just one recent crash. Also, please note that the proposed high-speed rail system would be built next to a natural gas compressor facility that releases gas emissions several times annually for emergency testing purposes, sometimes accidentally. The high-speed rail system’s 1960s-technology requires overhead catenary wires that emit electrical sparks from trains passing the natural gas facility dozens of times every day—a significant combustible danger not only to passengers but also to the local personnel, citizens, and general public, as well as to wildlife and the environment in the vicinity of the natural gas facility.

“Also, independent rail engineers in 2018 concluded that the proposed high-speed rail route along the Hockley Segment (HC-4) along the approach to northwest Houston is the most dangerous of all the possible options from which Texas Central could have selected. It contains the greatest number of mini-curves (each of which requires another left or right turn by the high-speed train), each of which increases the risk of train derailment. The engineers also warn that Houston’s intensive summer heat climate increases the potential for rail buckling, further exacerbating the danger of derailments.”

According to a local media report, the Texas Supreme Court on Oct. 15 granted a motion for rehearing of a case that challenges Texas Central’s eminent domain authority. The court previously denied review of the matter, but agreed to hear the case of James Miles, a landowner in Leon County who is challenging whether or not Texas Central is legally recognized as a railroad company under state law. Oral arguments are set for January 11, 2022.

In the case summary provided by the court, Miles argues that Texas Central “is not operating as a railroad because it has not taken crucial steps toward operation, such as laying track or running cars.” He also says the company “is not an ‘interurban electric’ railway because the Texas Legislature did not intend to include large high-speed railways within the statutory definition.”

The summary also cites the 2016 case of Texas Rice Land Partners, LTD v. Denbury. Miles says the decision from that case “requires entities show a reasonable probability that a project will be completed before obtaining eminent domain power.”