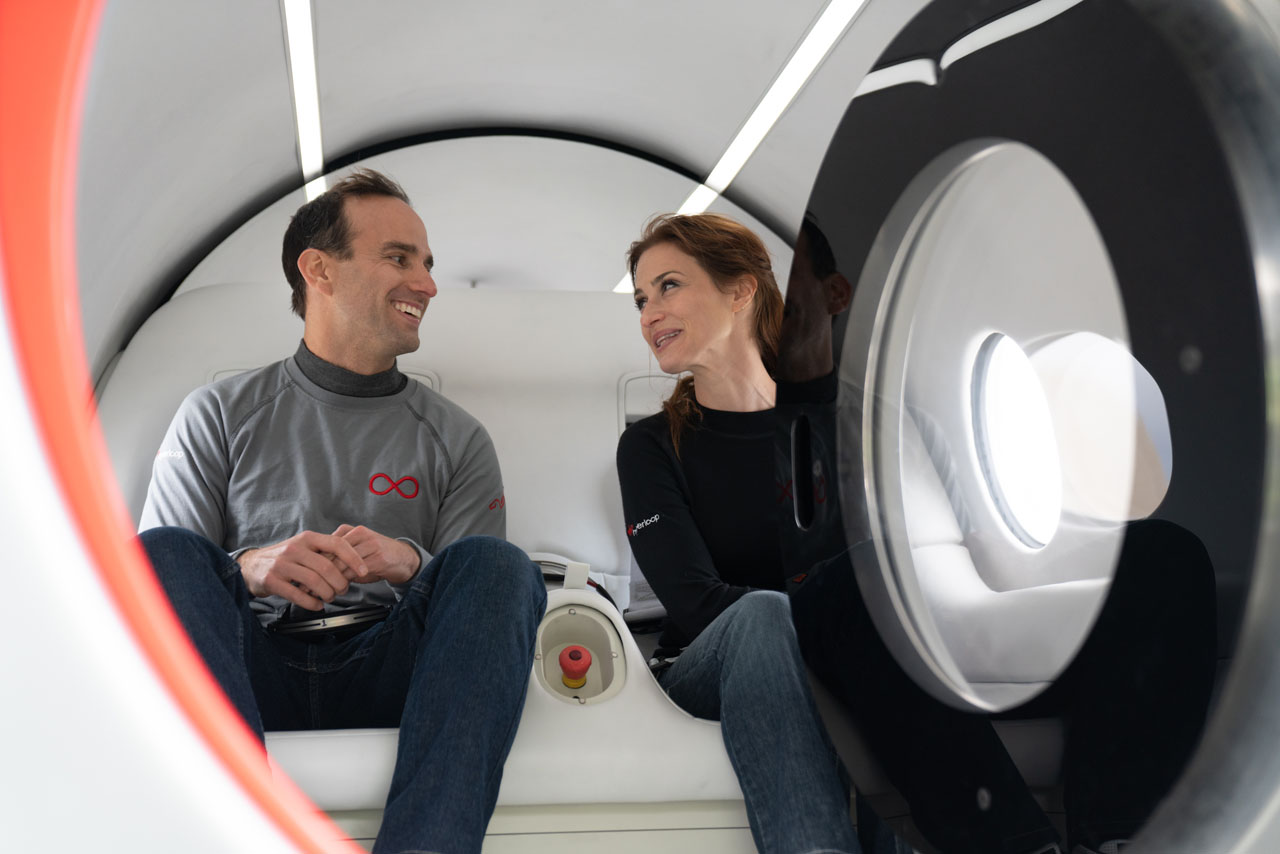 Virgin Hyperloop has demonstrated for the first time with riders its hyperloop technology at the 500-meter DevLoop test site in Las Vegas, where the company has previously run more than 400 unoccupied tests.

Virgin Hyperloop is one of several companies competing to build the first revenue-service version of the hyperloop, Elon Musk’s sub-sonic (700-mph) maglev-vehicle-inside-a-frictionless-vacuum-tube concept. It has received more than $400 million in funding; DP World and the Virgin Group are among its investors.

The pod was reportedly propelled to 107 mph in 6.25 seconds. Virgin Hyperloop estimates that the top speed of its system—with 28-passenger pods or cargo pods—would be 670 mph.

“I can’t tell you how often I get asked ‘is hyperloop safe?’” said Virgin Hyperloop CEO Jay Walder, who spent several years at the New York Metropolitan Transportation Authority (MTA) in executive-level positions. “With today’s [Nov. 8] passenger testing, we have successfully answered this question, demonstrating that not only can Virgin Hyperloop safely put a person in a pod in a vacuum environment, but that the company has a thoughtful approach to safety which has been validated by an independent third party.”

Industry-recognized Independent Safety Assessor (ISA) Certifer has overseen technology testing from the start. “Having undergone a rigorous and exhaustive safety process, the XP-2 vehicle demonstrates many of the safety-critical systems that will be found on a commercial hyperloop system and is equipped with a state-of-the-art control system that can detect off-nominal states and rapidly trigger appropriate emergency responses,” Virgin Hyperloop said.

In October, Virgin Hyperloop announced that its Hyperloop Certification Center would be located in West Virginia.

In July, U.S. Department of Transportation (USDOT) Secretary Elaine Chao and the Non-Traditional and Emerging Transportation Technology (NETT) Council “unveiled the guidance document on a clear regulatory framework for hyperloop in the United States. This historic announcement not only provides a pathway for hyperloop regulation and deployment in the U.S., but also establishes hyperloop’s eligibility for federal funding for projects,” Virgin Hyperloop said.

“Pathways to the Future of Transportation guidance on new, cross-modal technologies will help address legitimate public concerns about safety, security and privacy without hampering innovation,” Chao said when the document was released.

Chao announced the creation of the NETT Council last year as “an internal deliberative body to identify and resolve jurisdictional and regulatory gaps that may impede the deployment of new technologies, such as potential advances in tunneling technology and hyperloop. Pathways to the Future of Transportation intends to help private sector innovators understand the purpose, structure, and function of the NETT Council; lay out the principles guiding the Department’s policies and posture toward transformative technologies; and deliver a high-level overview of the federal framework for supporting non-traditional and emerging technologies.”

Virgin Hyperloop aims to achieve safety certification by 2025, with commercial operations beginning in 2030.