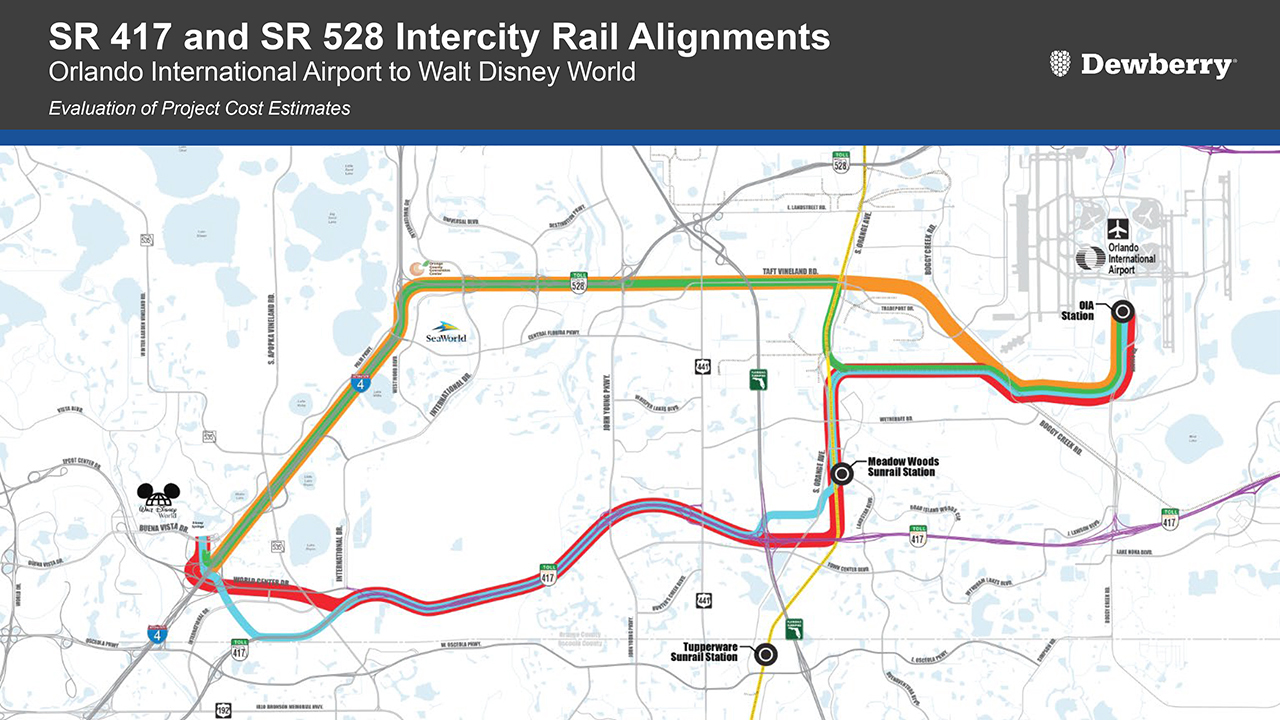 Brightline, Florida’s private-sector passenger railroad that is building a line from West Palm Beach to Orlando International Airport (MCO), continuing west to Walt Disney World and Tampa, has been spared from missing a July 31 deadline imposed by the Florida Department of Transportation (FDOT). The project will still take longer to complete than originally projected, but is proceeding.

FDOT wrote to Brightline on March 1, demanding that the railroad complete a series of steps by July 31 toward its Phase 3 expansion west of MCO toward Tampa, with a station to serve the Disney World complex. The Phase 2 project between West Palm Beach and MCO is under construction and expected to be completed late in 2022, with service to begin in 2023. FDOT required Brightline to obtain necessary permissions from the Greater Orlando Aviation Authority to operate on airport property; Sun Rail, through its owner, the Central Florida Commuter Rail Commission (CFCRC), to share its track; and the Central Florida Expressway Authority (CFX) to build and operate on highway right-of-way. In addition, FDOT required Brightline to comply with the Federal Railroad Administration’s request for regular progress reports.

Brightline initially would not have met the July 31 deadline because, even if for no other reason, the situation with CFX over the location of the right-of-way between MCO and the Disney complex is still unsettled. FDOT has now rescinded that deadline.

In a letter to Brightline President Patrick Goddard dated July 19, Brad Thoburn, FDOT Assistant Secretary for Strategic Development, withdrew the deadline, saying: “We look forward to continue working with Brightline as we look to improve mobility options between Orlando and Tampa.” He also explained the reason for the agency’s decision: “Significant progress has been made on negotiating terms of the Central Florida Rail Corridor agreement, including a resolution by the Central Florida Commuter Rail Commission stating the acceptable terms for such an agreement. Because of the progress to date and the inclusion of the CFCRC terms in the Lease Agreement, FDOT no longer believes a formal agreement is needed prior to July 31, 2021. We do encourage the continued development of a term sheet defining the requirements for potential use of the CFRC.”

On July 20, there was a long, contentious meeting of the CFX Board, which threatened to derail the project by preventing Brightline from obtaining the necessary approval from CFX by the July 31 deadline. Public comments went on for two hours. Kevin Spear reported on the meeting in the Orlando Sentinel, outlining the controversy and reporting that the CFX Board decided to delay a decision.

Spear reported: “CFX agreed unanimously … to delay indefinitely a decision on whether to allow Brightline to build passenger rail beside the agency’s State Road 417 on the way from Orlando’s airport to Walt Disney World and Tampa. The vote came after nearly 3.5 hours of discussion dominated by a coordinated push from representatives of the International Drive tourism strip and the Hunter’s Creek residential community to deny access by the private rail company to the tolled S.R. 417 expressway. Such a denial would force Brightline to consider a significantly more costly route to the tourism strip.”

That alternative would run west along Route 528, a highway located north of 417. It would then run southwest along I-4 near International Drive, the “tourist strip” that Spear mentioned. A comparison of the routes can be found at Attachment 1 in the document packet considered at the meeting:

The route along S.R. 528 and I-4 was originally proposed in 2010, but Brightline now prefers the S.R. 417 alignment, which is also used by Sun Rail’s local trains. Spear reported: “Within the past year, proponents of International Drive, Universal Orlando and the Orange County Convention Center have rallied behind an alternative route for Brightline. In addition, residents of Hunter’s Creek, an upscale community located near Route 417, do not want the railroad to use the alignment located near them. Those parties prefer the alignment along Route 528 and I-4, which would be more expensive.

Cost is an important factor in the upcoming decision about where to place the line. It will cost more to build on the alignment along Route 528 and I-4, and estimates of the difference vary widely. According to Spear, a consultant hired by International Drive merchants and Universal estimated the difference to be $294 million, a consultant hired by the Expressway Authority pegged the difference at $700 million, and it could be more. Spear explained: “A planned overhaul of I-4 could vastly reduce track space for Brightline and force the company to build elevated tracks along the interstate. If that occurs, the cost of International Drive’s preferred route could be $2.2 billion, according to the expressway authority’s consultant.” Brightline estimates the cost for the less-expensive Route 417 alignment at $1 billion.

If the more-expensive alignment is eventually chosen, it is unclear how the additional cost would be funded. There are also environmental issues that need to be addressed. As well, it is unknown if other conditions imposed by FDOT earlier this year have been met. None of the parties have reported those agreements, and Railway Age’s requests for comment have gone largely unanswered.

Despite the fact that the Brightline will not meet the conditions that FDOT imposed earlier this year, it appears that the delay will not be fatal to the portion of the project that would extend the line westward from the airport to the Disney complex. FDOT spokesperson Brian Hutchins appeared upbeat about the eventual construction of the new line. The draft resolution considered by the CFX Board noted Brightline’s investments to date of $4.4 billion, along with the railroad’s intention to extend the line to Tampa. The “Resolved” clause reads: “CFX will continue to meet with Brightline to discuss and consider all options and corridors to advance the High-Speed Rail project. If the High-Speed Rail Project ultimately requires the use of CFX right-of-way, a contract for the sale and purchase of a rail line easement and a rail line easement maintenance agreement will be negotiated.”

As such, the latest developments indicate a delay, but not an annulment. It will take time to work out the final alignment, especially with parties representing competing interests expressing their views so strongly. It seems likely that part of the cost that Brightline will incur will be reimbursing CFX for “lost toll revenue” due to the availability of the train as an alternative to the highway. This issue appears to be unprecedented in U.S. passenger rail development, but it could be important to the bondholders who originally invested some of the money to build the publicly owned highways operated by CFX. The CFX Board’s packet indicated that Brightline made a “toll diversion payment” in December 2015.

Three bullet points were attached to the CFX resolution:

• CFX is committed to multimodal options for future capacity improvements on the CFX system.
• CFX will continue to meet with Brightline and key stakeholders to discuss all options and corridors.
• If Brightline requests the use of CFX right-of-way, Board approval would be required for a proposed Rail Line Easement and Rail Line Easement Maintenance Agreement.

With that interim level of agreement, and in light of FDOT’s recent approval, it is clear that talks will continue, and the expectation persists that the outstanding issues will eventually be resolved to FDOT’s satisfaction. It appears that, if an agreement can be reached with CFX, it should not be difficult for Brightline to get similar agreements with Sun Rail and the Greater Orlando Aviation Authority. That level of progress should also satisfy the FRA.

So, despite missing the looming deadline, it appears that Brightline’s expansion plans are still on track, even if the “ Phase 3 train” arrives at the proverbial station later than originally expected. In the meantime, passenger rail users can look forward to the eventual opening of service between West Palm Beach and Orlando International Airport (Phase 2), and before that, restoration of pre-COVID trains (Phase 1) between downtown Miami and West Palm Beach.