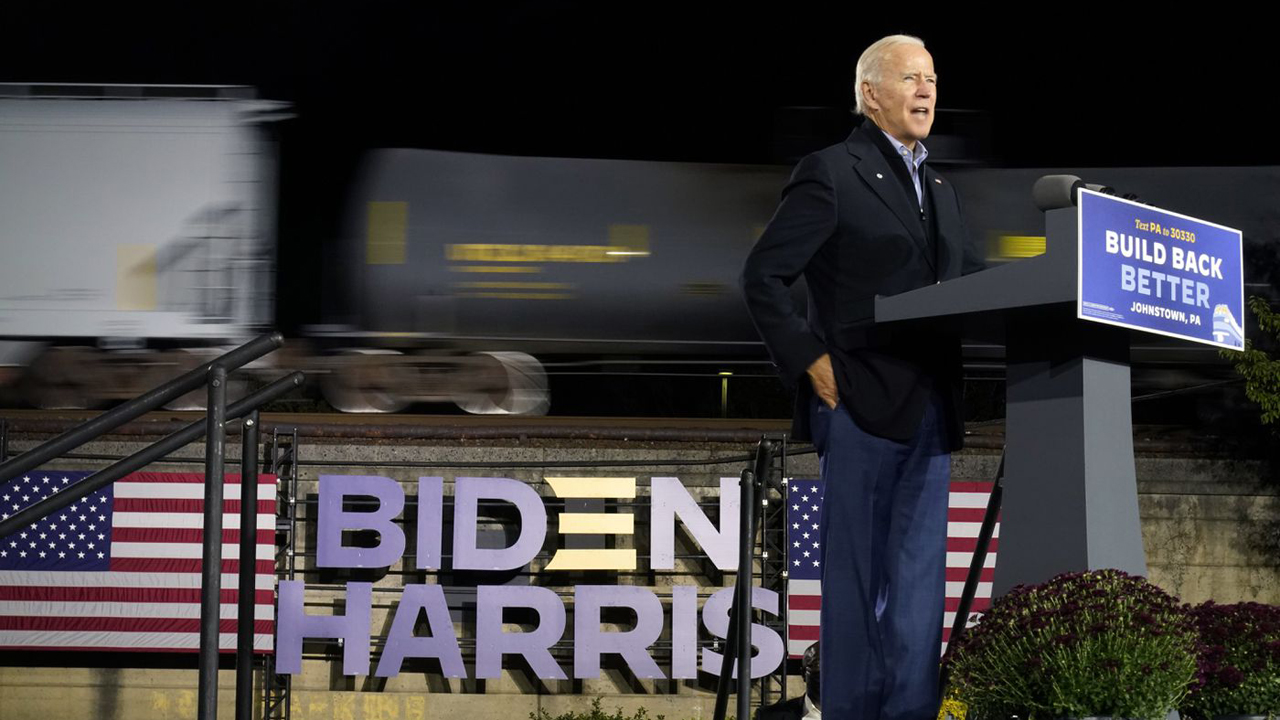 Joe Biden speaks at the Amtrak train station in Johnstown, Pa., at the end of a day-long train tour through Ohio and Pennsylvania. Andrew Harnik/AP

Rail transit rail equipment is among the transportation equipment subsectors most likely to benefit from a potential “Blue Wave” in January following a Joe Biden/Kamala Harris win and the Democrats flipping enough seats in the U.S. Senate in the November Presidential election to take control of that chamber.* As well, a power shift in Washington could drive a public transit service recovery in the U.S.

We’ve long held that the dire concerns about transit equipment are overblown, and that a change in the political landscape could be a boon. This would reduce the risk, for example, to Wabtec’s North American transit business. Diesel engine manufacturer Cummins, Inc., stands to benefit in passenger locomotive power (as examples, the QSK95, used in the Siemens Charger; or the QSK19-R, employed in certain diesel multiple-units).

We now expect transit service in the U.S. to return to near pre-pandemic levels in late 2021, under the base assumptions that a coronavirus vaccine is introduced early next year, and that emergency federal funding in excess of $30 billion is provided. A full ridership recovery will likely lag a full service recovery by at least 12 months. In other key world regions, we expect full ridership and service recoveries to occur 3-6 months before they do in the U.S.

As it relates to Wabtec, which generates roughly one-third of its revenue from transit equipment and services, much of the pushback to our previous reports on the future of transit was based on U.S. market conditions. While we do believe that mass transit could be more adversely affected in the U.S. and could take longer to recover than in Europe and Asia, Wabtec generates ~85% of its transit revenue outside the U.S. In many of the world regions Wabtec serves, a full economic recovery would be all but impossible without public transit returning to near-pre-pandemic levels.

During the initial wave of shutdowns, concerns about the future viability of public transit reached levels not seen before, and some investors all but declared transit dead. The ease with which this is understandable derives from the difficulty of imagining social distancing on a rush-hour train. The concerns eased slightly as economies began to reopen in the summer and as ridership ticked up. But it appears to us that sentiment has deteriorated again as of late. We continue to believe that in the fight against viral outbreaks, public transit could be part of the solution, not the problem.

Beyond 2020, the solid growth outlook for the transit equipment market remains intact and pillared on the following eight factors:

1. There Is No Direct Correlation Between Public Transit Use and Coronavirus Transmission

Multiple studies, most recently one by Sam Schwartz dated September 2020, have detected no direct correlation between public transit use and coronavirus transmission. The aforementioned study also notes that “an analysis of public transit ridership in multiple cities over the past three months shows no correlation with the rise or fall of local COVID-19 cases. Case studies underscore that case rates are tied primarily to local community spread, rather than correlated to public transit ridership rates.”

The absence of elevated transmission risk is likely attributable to a number of factors. Subway cars typically have better ventilation than many other closed environments such as restaurants. People are less likely to talk in subway cars than they are in other environments. They also spend relatively shorter periods of time. Finally, adherence to mask wearing, following the COVID-19 outbreak, is much greater in public transit than in most other environments.

2. A Change in the Political Landscape Could Be a Boon in the U.S.

A potential political power shift could be positive for public transit and would make emergency federal funding in excess of $30 billion more likely to occur, with more funding possible beyond that. On June 3, the American Public Transportation Association (APTA) said that it, “on behalf of the entire public transportation industry, would like to thank House Committee on Transportation and Infrastructure Chair Peter A. DeFazio (D-Ore.), Chair of the Subcommittee on Highways and Transit Eleanor Holmes Norton (D-D.C.), and Chair of the Subcommittee on Railroads, Pipelines, and Hazardous Materials Dan Lipinski (D-Ill.) for their extraordinary leadership in crafting the INVEST in America Act. We strongly support the bill and its critical investments for surface transportation infrastructure, including $105 billion for public transportation and $60 billion for commuter rail, Amtrak, and other high-performance rail.”

3. The Potential Long-Term Impact of Lower Ridership on Equipment Demand Could Be Offset by Social Distancing Measures

Even if a degree of working remotely persists past the pandemic and prevents public transit ridership from recovering fully to pre-COVID-19 levels, that could be offset, at least in part, by a lasting level of social distancing requiring a similar number of railcars to move a smaller number of passengers. In an APTA survey earlier this year, 60% of responding agencies said they plan to increase service on certain routes to reduce crowding.

4. The Pursuit of Safer Service Could Mean Increased Equipment Upgrades/Replacement

According to APTA, transit agencies could rely on manufacturers to design equipment that promotes better air circulation. This could range from upgrades to existing passenger railcar fleets to replacement.

5. Some Domestic Air Travel Could Go to Regional Passenger Rail

This is as social distancing and maintaining clean air circulation may be somewhat easier to achieve on railroad systems such as Amtrak.

6. Public Transit Is Key in the Climate Change Fight

The World Health Organization notes that climate change will affect infectious disease occurrence. Mounting scientific evidence indicates that working to boost biodiversity and other environmentally friendly actions can reduce the risk of viral outbreaks. Deforestation and warming temperatures are increasingly causing species to lose habitat and putting them in closer contact with humans, thus raising the risk of animal-to-human spread of viruses. Being key in the fight against climate change, public transit is one of the defenses against future pandemics.

The renewed global focus on social justice and economic equity could make it difficult for governments and municipalities to reduce public transit service, which is key to the mobility and livelihood of billions of people around the world. According to studies by the International Association of Public Transport (UITP), mass transit carries well over 50 billion passengers annually.

Wabtec appears poised to deliver solid results in what looks increasingly like a 2020 trough for rail equipment demand. Execution has improved markedly under the new leadership, thanks in part to heightened focus on cost management.

A change in the political landscape could be a boon for hydrogen and electrification over the next few years. While Cummins’ New Power segment is likely to lose ~$500 million over the next three years as the company invests in a number of alternative technologies, including electrification, electrolyzer technology, hydrogen fuel cell and natural gas, the company is one of the best positioned in the long term. Barring a robust and sustainable oil price recovery, fuel cells may become more promising than electrification. The world’s first hydrogen fuel cell-powered passenger train, the Alstom Coradia iLint, is powered by Cummins. Two of them completed an 18-month trial in 2019 with more than 100,000 miles in service. Cummins expects to power 41 trains with 82 hydrogen fuel cell systems by 2022.

All this said, there are potential risks:

In a Blue Wave scenario, there are likely to be two sizable packages of fiscal relief in very early 2021. One of the lessons from 2009 for Biden and his circle of advisors was that the $787 billion stimulus bill was too little and too late. Given that a Phase 4 fiscal package is now very unlikely before the elections, a meaningful (~$2.5 trillion to $3 trillion) package is likely in the late January/early February 2021 time frame (maybe the Heroes Act from May). This could also serve as the test for Senate Republicans: If you don’t support this, a filibuster could be gone, depending on margin. This would likely include at least $1 trillion in state/municipal aid.

Along with a ~$4 trillion tax plan to offset, Biden’s four-part Build Back Better plan is likely to create a Phase 5 bill in early 2021, should he win, with a Senate flip to Democrat control. Biden’s infrastructure and green energy plan anchors his economic recovery plan, which ups a $1.3 trillion November plan to $2 trillion. State aid will be a big priority here as well.