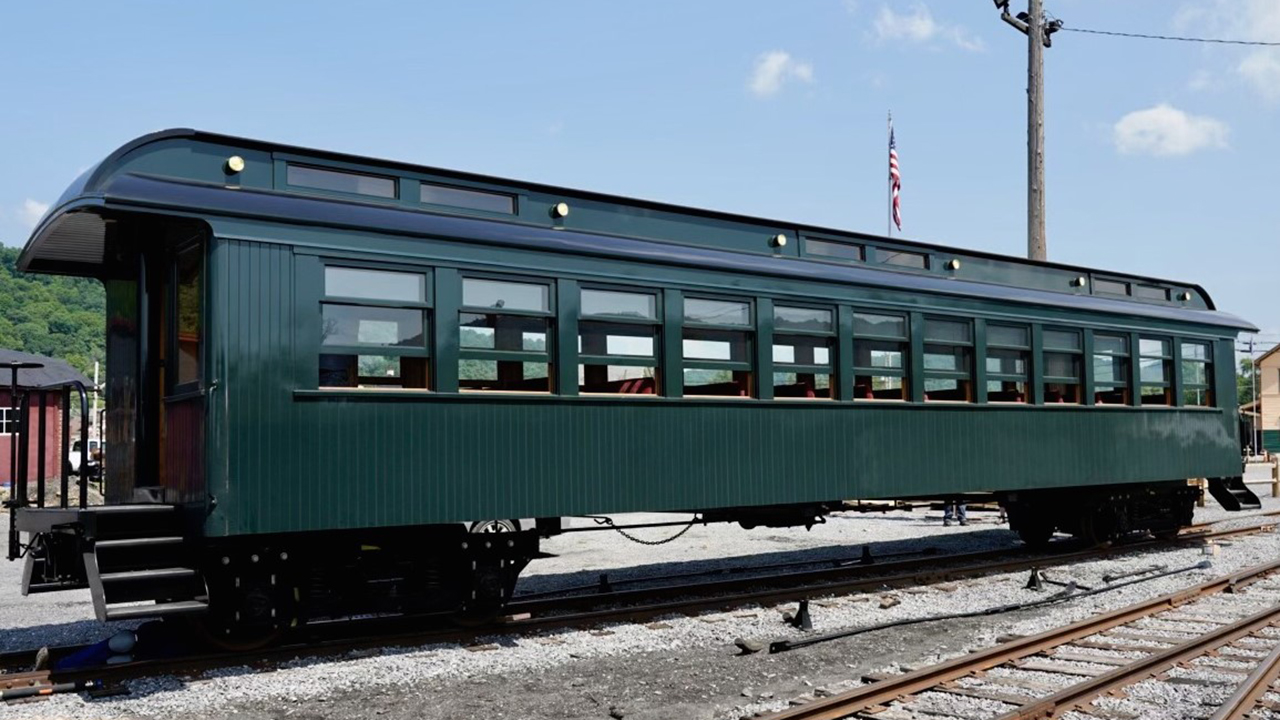 Amtrak’s new Alstom-built Acela II high-speed trainsets, built to operate at speeds up to 160 mph on the Boston-New York-Washington D.C. Northeast Corridor, “will not beat out the first of four new 19th century replica passenger cars to arrive at the legendary East Broad Top (EBT) Railroad in Pennsylvania,” the railroad, a National Historic Landmark, announced July 29. “Pulled by vintage steam and diesel engines, they will roll down our 150-year old railroad at around 15 mph.”

“It’s all part of the renaissance and end of hibernation for one of the most historic, intact and stunningly beautiful narrow-gauge railroads in America,” Director of Sales and Marketing Jonathan Smith said. The railcar pictured above is one of four new coaches built in Bellingham, Wash. by Hamilton Manufacturing Inc. for the East Broad Top. They feature a finished wood interior, electric lighting, restrooms, large viewing windows and heat, “which allow passengers to travel comfortably in all weather and seasons,” Smith noted. “This is cutting edge comfort on the EBT, a railroad known for its popular open-air cars, which will still run.”

The EBT shut down in 1956 and was to be completely scrapped by a salvage company. But Nick Kovalchich, owner of Kovalchich Salvage, “took one look at this totally intact antique and saved it,” Smith said. “Former Smithsonian Transportation Curator, the late William Withuhn, would in 1988 call the EBT an ‘incomparable national treasure’ and go on to declare that ‘nowhere in North America did such a complete and original historic site exist.’ Now designated a National Historic Landmark, the railroad slept, ran a few miles as a local tourist line for several years, and then went back into hibernation waiting to be saved.”

“In 2020, a nonprofit foundation organized by some of the most prominent names in modern railroad preservation came together and acquired the EBT with the ambitious plan of bringing an American treasure back to life,” Smith explained. Happily, the salvage company, now called Kovalchich Corporation, is still involved. Nick’s son Joe is on our board. Steam engines are being restored, track is being replaced and upgraded, a town and valley is coming to life, and yes, new passenger cars have arrived for the first time in more than a century.”

In May 2022, the East Broad Top began operating regularly for the first time in a decade. “Like Brigadoon, the railroad is back, and the sound of a brass whistle once again echoes through the valley,” Smith said.