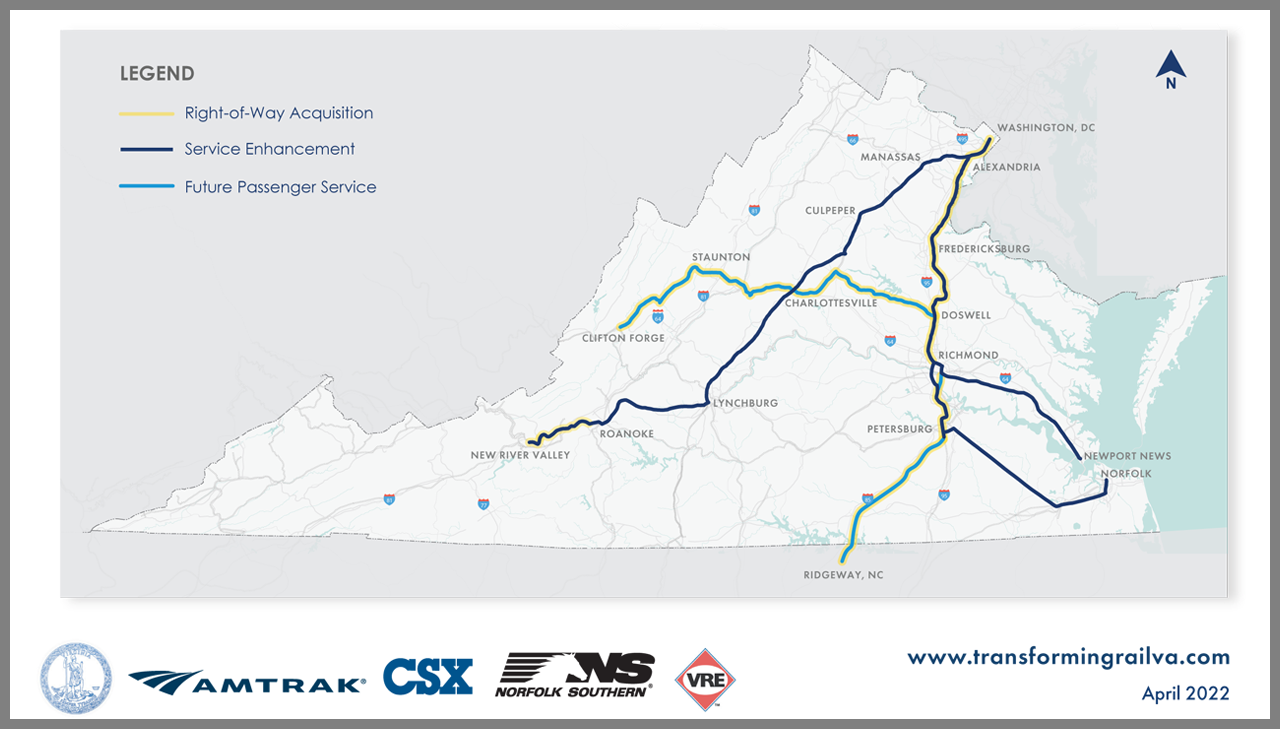 Map of the “Transforming Rail in Virginia” initiative

Engineering, planning and consulting services firm Michael Baker International announced Nov. 17 that it has been selected by CSX, which operates more than 2,000 miles of track throughout the state of Virginia, to lead program and construction management for significant rail enhancement projects as part of the Transforming Rail in Virginia (TRV) initiative.

The TRV initiative was unveiled in December 2019 by former Gov. Ralp Northam and “represents an innovative public/private partnership that also includes the Federal Railroad Administration (FRA), Virginia Department of Transportation (VDOT), Amtrak and Virginia Railway Express (VRE) commuter rail operator as key stakeholders.” In June 2022, Railway Age reported that VRE is committing $195 million to the initiative that encompasses the design and construction of multiple projects between Washington, DC, and Richmond, Va., totaling $3.7 billion. This work is being completed in conjunction with the Virginia Passenger Rail Authority (VPRA), the lead state agency that was created in 2020 for TRV.

“Michael Baker has a history of overseeing rail and transit projects for more than 40 rail carriers throughout the country, providing innovative solutions that enable our clients to achieve their goals and ultimately, enhance the transportation of freight,” said Kirsten Bowen, National Director, Freight Rail at Michael Baker International. “I am thrilled that the Michael Baker team, supported by Patrick Engineering, is servicing CSX on this exciting infrastructure project that will transform rail in Virginia, as well as the Rail and Transit Practice at Michael Baker.”

As TRV capital investments are completed, VPRA will gain control of 350 miles of railroad right-of-way and 225 miles of existing track from CSX, enabling expanded passenger rail services. Once Virginia completes construction of a separate passenger rail corridor along this section of track, Virginia and CSX will “benefit from freight-dedicated tracks free of passenger rail traffic,” the firm said. This, Michael Baker adds, will lead to enhanced passenger rail service, such as more frequent Amtrak state-supported trains and a near doubling of VRE Fredericksburg Line commuter service to include new late-night and weekend service.