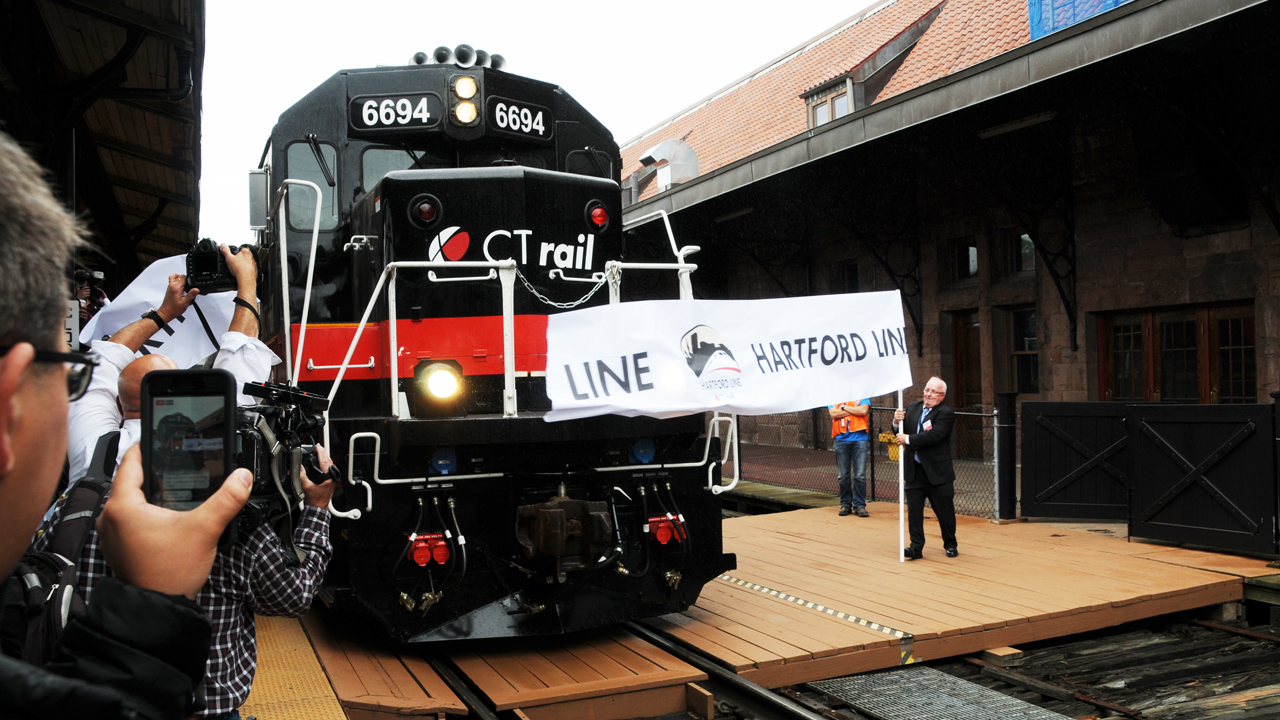 HARTFORD, Conn. – If it takes money to make money, then Connecticut has pushed all its chips into the rail transit pot.

The state ­– with help from the U.S. Department of Transportation – is making a $769 million bet that the New Haven-Hartford corridor can lure commuters to the rails, boost development, and again make the inland route a key link in the region’s transportation network.

Ten years in the making, service on the newly-named CTrail Hartford Line got underway June 16 running along the I-91 corridor from New Haven to the capitol at Hartford, and on to Springfield, Mass., and capacity crowds turned out for a weekend of free rides. Built at a cost of $769 million, including $564 million from the state and $204.8 in federal funding, the project added three new stations, five interlockings, upgraded approximately 70 miles of track to a maximum 110 mph speed, while increasing service frequency on the six-stop, 46-minute trip to 16 roundtrip weekday trains, for $8 one-way. (Twelve trains will run daily to Springfield.) 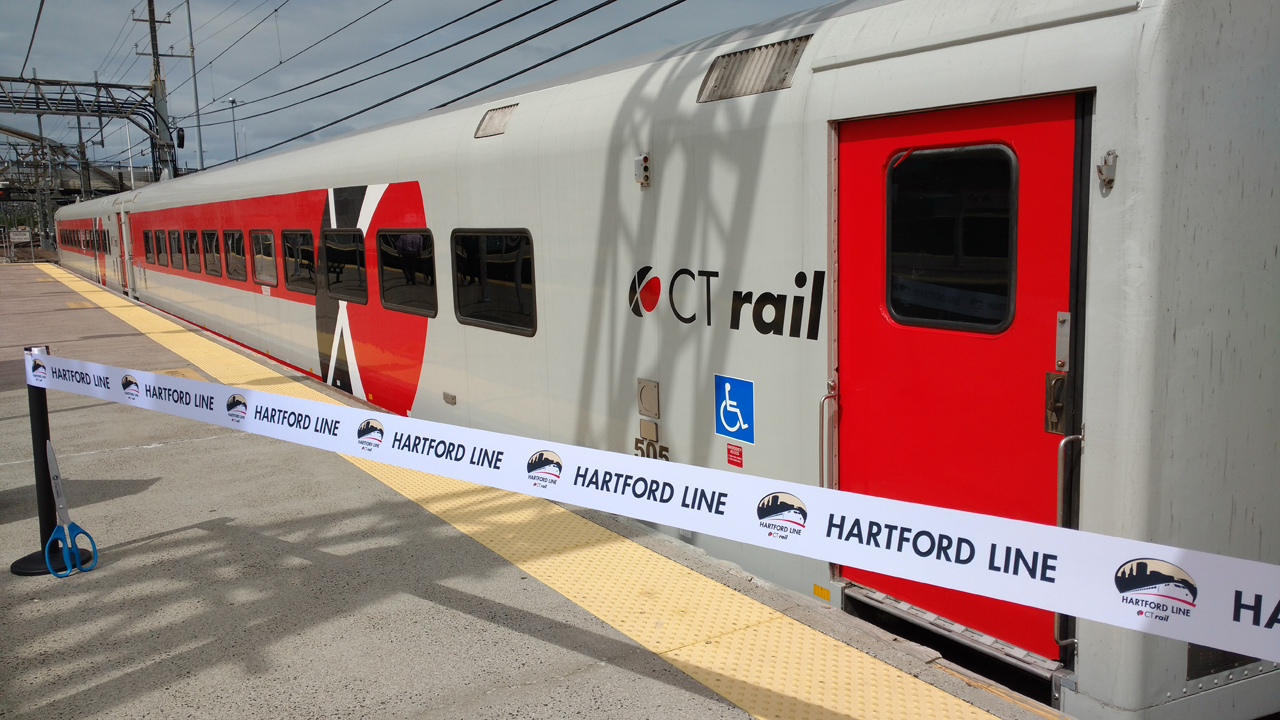 “We have an extensive transportation plan for the future, and rail is a big part of that,” Malloy said in an interview with Railway Age aboard the train. “But, you have got to be brave, you have to lead. A project of this size and scope is important to Connecticut’s competitive future. It’s about the corridor, and the industries from jet engines to financial services and more around that corridor, the supply chain and thousands of companies.” 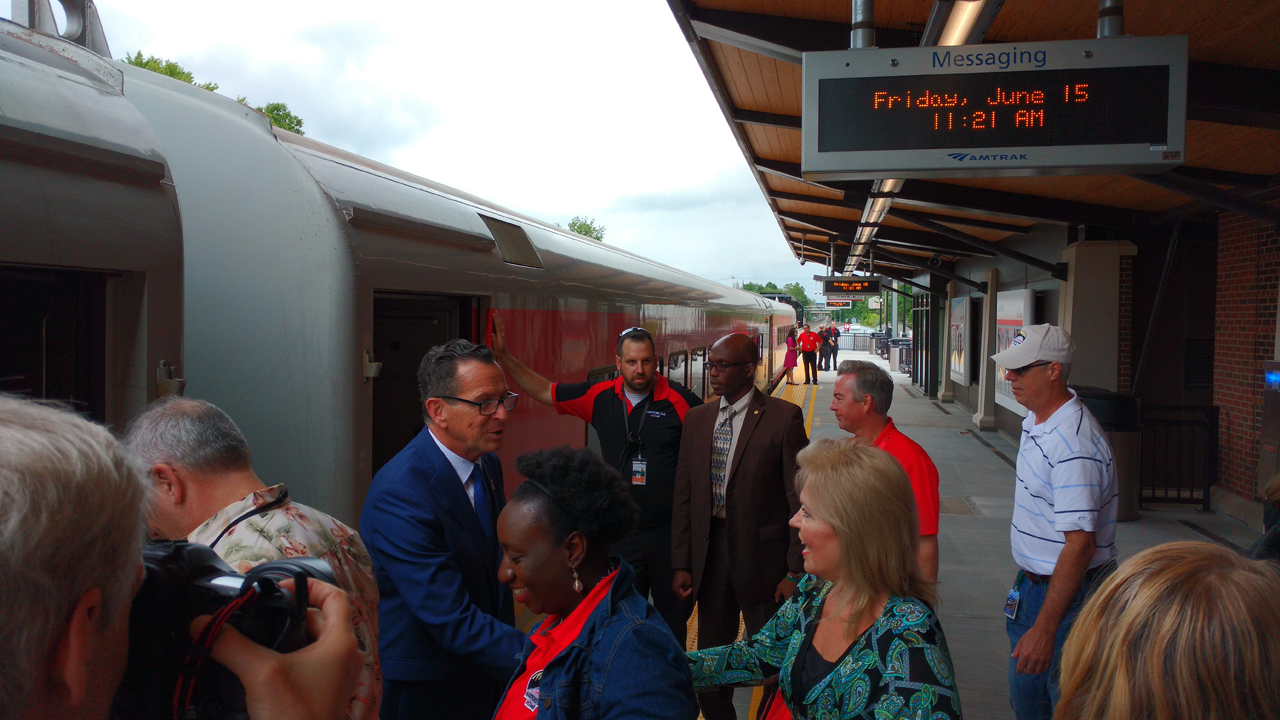 The project’s funding originated in 2008 as part of President Barack Obama’s stimulus package, for a total cost of $769 million, all of it publicly funded. Engineering consultant WSP USA served as program manager overseeing the project. The annual state subsidy for the line will total $21.7 million, with a total annual operating cost of $23 million, John Bernick, the Department of Transportation’s project manager for construction said earlier this year.

Importantly, planners from the beginning took into account rail freight activity along the line. Genesee & Wyoming’s Connecticut Southern Railroad switches a number of customers for commodities including paper, pulp, construction debris, and lumber. Hartford’s Bradley International Airport and the Army National Guard’s Camp Hartell in Windsor Locks are also customers. It interchanges with CSX in Springfield and New Haven; Central New England Railroad and Providence & Worcester in Hartford, and Pan Am Southern in Berlin. The latter maintains operations and trackage rights on the line, interchanging with CSX and Providence & Worcester in New Haven.

Even as the CTrail special arrived in at Hartford Union Station, Amtrak continued to run a test train led by a former Metroliner at speeds up to the 110 mph at which its trains will run. CTDOT trains will run at a maximum 79 mph, limited by the pair of four-car sets leased from Massachusetts and powered by the CTDOT’s EMD GP40-2H diesel locomotives, whihc are being overhauled by National Railway Equipment. All-new rolling stock is expected to come online in three to five years, though orders have yet to be written. Amtrak currently operates nine daily trains between New Haven and Springfield: seven Shuttles, along with the daily Vermonter and Northeast Regional. 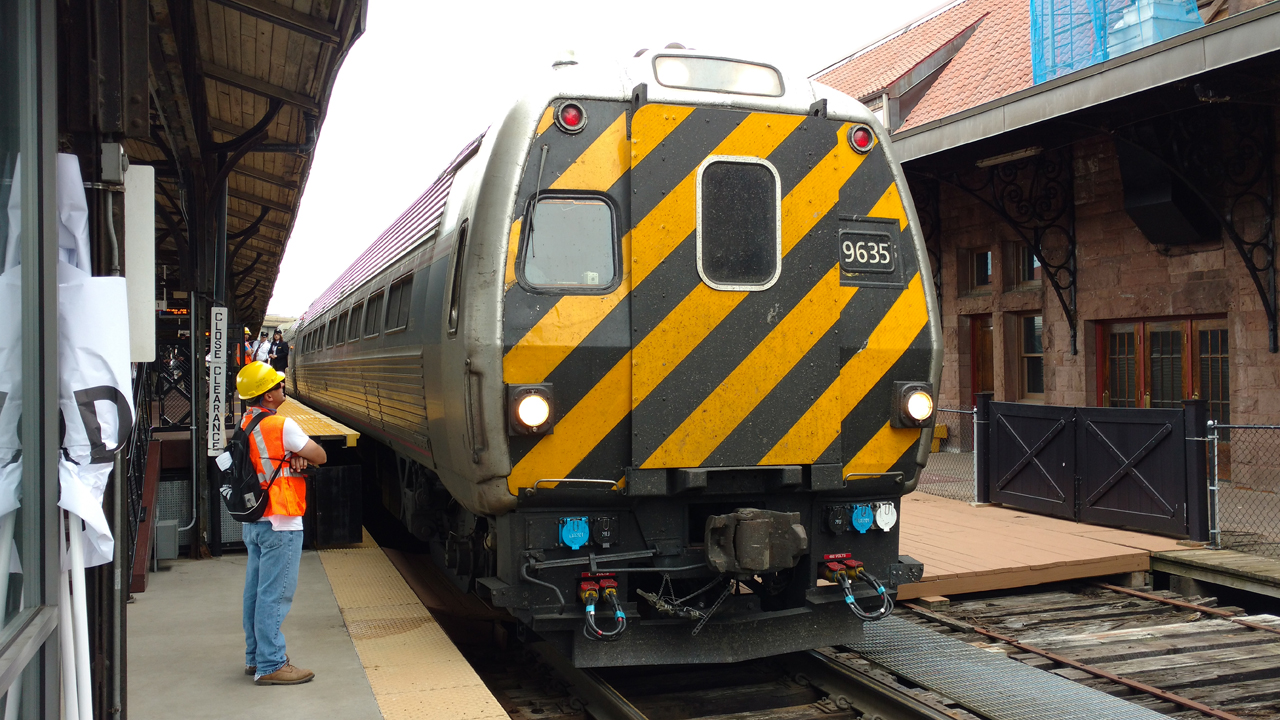 Amtrak has been testing The Hartford Line at 110 mph with this former Metroliner. The engineer pronounced the upgraded route “smoother than I expected.” Railway Age photo by Stuart Chirls

Planners forecast traffic of 1,800-2,000 passengers daily, and also see CT Rail as a critical link for potential commuter traffic into New York City via New Haven. The line was constructed by the Hartford and New Haven Railroad in 1844, the first all-rail route between Boston and New Haven. The Shore Line, now Amtrak’s Northeast Corridor, became the main route to Boston and Amtrak dropped Inland Route service in 1996. Amtrak in the 1980s lifted 25 miles of track, reducing the double-track line to single track with passing sidings.

“What this has done is bring back capacity to a dwindling asset,” said Robert Yirigian, WSP Assistant Vice President and Deputy Area Manager, aboard the tour train. He observed that the route was an engineering challenge installing 27 miles of double track and two miles of new passing sidings.

“It’s 100-year old infrastructure, so we were wrestling with old standards, modern environmental requirements, and so on. The result is faster service and improved connections into New Haven.”

Yirigian said that the line’s existing Advanced Civil Speed Enforcement System (ACSES) cab signaling means that full Positive Train Control technology is expected to be a drop-in fit by the end of this year, per the FRA’s statutory deadline. 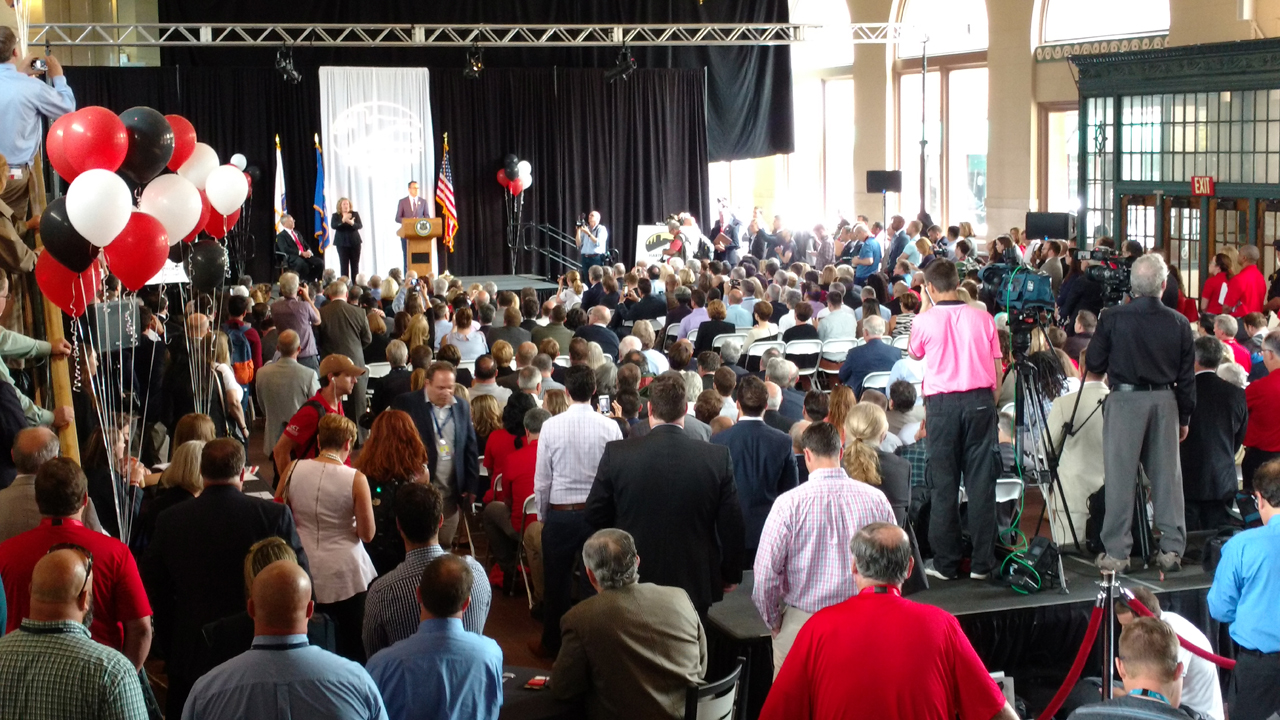 The new station in Wallingford has led the city to shift industrial development of industrial space to the north, creating opportunities for mixed-use and retail projects downtown. A completed TOD plan includes the expansion of 200 residential units by the existing Parker Place, a new Town Center zoning district, and reducing off-street parking requirements.

Berlin hosts the third new station, where the town is advancing several redevelopment projects near the station and improving accessibility between Depot Crossing, a mixed-use development near the station. Other TOD plans and funding are progressing in the other CT Rail towns North Haven, West Hartford, Windsor, Windsor Locks and Enfield. 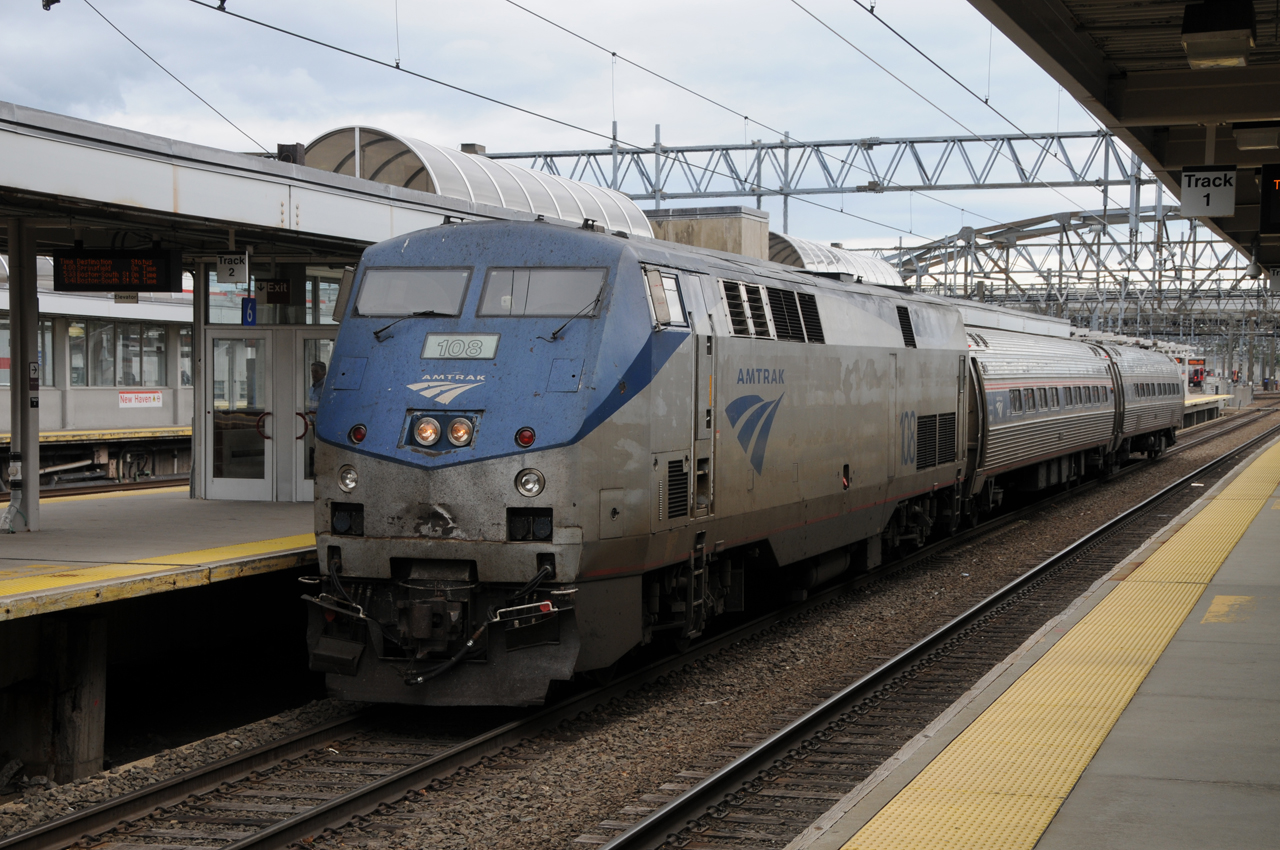 An Amtrak train waits at New Haven to head north to Springfield, Mass., at the end of the Hartford Line, June 15, 2018. Railway Age photo by Stuart Chirls