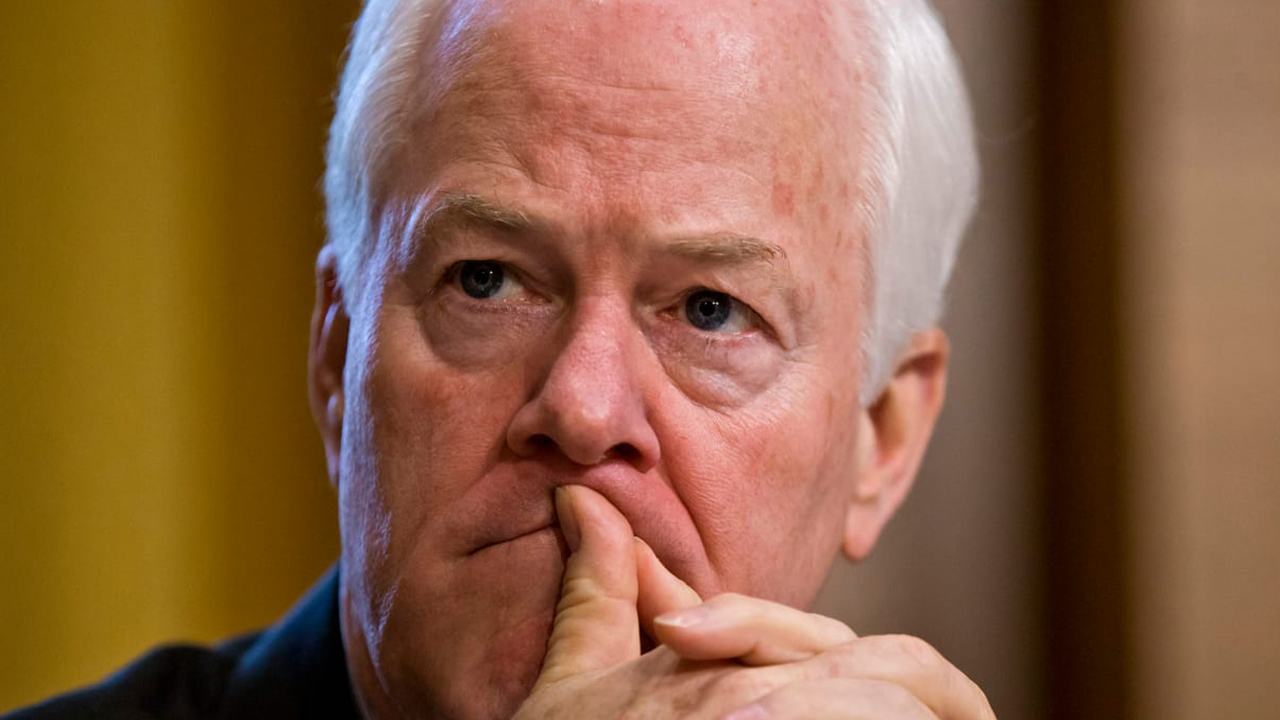 The Senate adopted a modified version of an amendment by Sen. John Cornyn (R-Tex., pictured) by voice vote. Photo courtesy The Daily Beast.

The U.S. Senate and House of Representatives have each passed versions of a U.S. Department of Transportation 2019 appropriations bill that would impose a one-year ban on new procurements of transit railcars or buses from companies owned or subsidized by the Chinese government (namely, CRRC, China Railway Rolling Stock Corp.), if the procurement uses any Federal Transit Administration formula or bus funding, according to an Aug. 1 Eno Center for Transportation report written by Jeff Davis, Senior Fellow and Editor of Eno Transportation Weekly.

“A modified version of an amendment by Sen. John Cornyn (R-Tex.) was adopted by voice vote as part of a bipartisan ‘manager’s package’ of 40-odd amendments to the four-bill ‘minibus’ appropriations measure for fiscal 2019 (H.R. 6147), which includes the annual Transportation-HUD appropriations bill,” Davis wrote. “The Senate language is a more refined and precise version of language that is already included in the version of the legislation reported in the House of Representatives (H.R. 6072). Section 165 of the House bill prevents any fiscal 2019 FTA funding from being used to procure any rail or transit asset from an entity owned, directed or subsidized by a country that is not spelled out by name in the section but is clearly the People’s Republic of China.”

The Senate language “narrows and clarifies the House language significantly,” Davis said. “The Senate prohibition only applies to funding from the urbanized area formula (§5307), rural area formula (§5311), state-of-good-repair formula (§5337) and bus and bus facility grant (§5339) programs (formula and discretionary), not other FTA programs. Notably, this leaves open the possibility that Capital Investment Grant program (§5309) money for future new-starts, small-starts, or core capacity projects could be used for Chinese rolling stock or buses (If the Trump Administration ever agrees to sign any new funding agreements for such projects, that is).

“The Senate prohibition only applies to rolling stock (rail cars and buses), not any other kind of procurement. It ‘shall be applied in a manner consistent with the obligations of the United States under international agreements.’ (However, Annex 2 of the Government Procurement Agreement of the World Trade Organization specifically says in Note 5 (at the end) that the WTO rules ‘shall not apply to restrictions attached to Federal funds for mass transit and highway projects.’)

It now appears to be a given that some version of the ban will be enacted into law in the final 2019 USDOT appropriations bill, since both the House and Senate language contain a ban on Chinese imports. The final language “will probably be closer to the Senate version, since the House language came out of nowhere and many of the changes in the Senate version reflect the input of USDOT, the U.S. Trade Representative, transit stakeholders and others on how to make the language work better,” Davis wrote.

Davis went on to link the proposed ban to activity within the U.S. freight car manufacturing sector. In his opinion, “The impetus behind this provision appears to come from the U.S. freight rail car manufacturers (Trinity, Greenbrier, etc.). They have seen how successful CRRC, Chinese state-owned rail company, has been at taking freight railcar market share in other countries, and want to head things off in the U.S. as early as possible. They have apparently decided that the best way to go about this is to prevent CRRC from establishing a beachhead in the U.S. in the transit railcar sector so CRRC can’t build large factories that could then be used to assemble Chinese-manufactured freight railcars as well. CRRC has indeed been building a foothold in the transit sector through its ability to drastically underbid other manufacturers, which may have something to do with the subsidies received from the Chinese government allowing them to sell at below their (already low) cost.”

Davis added that Senate Minority Whip Richard Durbin (D-Ill.) was trying to stop the Cornyn amendment, as it could impact CRRC’s under-construction Chicago assembly plant. “But, in retrospect, Durbin’s fight was doomed from the beginning—most Democrats have spent decades arguing that Buy America requirements should be strengthened generally, and two of the Senate’s most prominent Democrats on the Buy America issue, Tammy Baldwin (D-Wisc.) and Gary Peters (D-Mich.), were cosponsors of the Cornyn amendment. Add to that the fact that legislators from both parties have been beating up the Trump Administration for months over its flip-flop on the potential national security threat posed by purchases of Chinese-made computer and telecommunications equipment from manufacturers like ZTE and Huawei (including anti-China language in the pending appropriations bill), and the fact that Congress this week will send to the President a mammoth defense authorization bill that includes a requirement that the Secretary of Homeland Security study the national security implications of Chinese-made rolling stock in particular, and it was just too powerful to stop.”

Following is a comparison of the House and Senate bill languages:

SEC. 196. (a) None of the funds appropriated or otherwise made available to the Federal Transit Administration under this title to carry out sections 5307, 5311, 5337, and 5339 of title 49, United States Code, may be used in awarding a contract or subcontract to an entity on or after the date of enactment of this Act for the procurement of rolling stock for use in public transportation if the manufacturer of the rolling stock is incorporated in or has manufacturing facilities in the United States and receives support from the government of a country that—

(2) was identified by the United States Trade Representative in the most recent report required by section 182 of the Trade Act of 1974 (19 U.S.C. 2242) as a priority foreign country under subsection (a)(2) of that section; and

(b) This section shall be applied in a manner consistent with the obligations of the United States under international agreements.

(c)(1) This section shall not apply to the award of a contract or subcontract made by a public transportation agency with a rail rolling stock manufacturer described in subsection (a) if the manufacturer ‘produces’ rail rolling stock for an eligible public transportation agency through a contract executed prior to the date of enactment of this Act.

(d) Nothing in this section shall be construed to apply to funds that are not appropriated or otherwise made available to the Federal Transit Administration under this title.

SEC. 165. None of the funds appropriated or otherwise made available to the Federal Transit Administration under this Act may be used in awarding any contract or subcontract for the procurement of an asset within the mass transit and passenger rail or freight rail subsectors included within the transportation systems sector defined by President Policy Directive 21 (Critical Infrastructure Security and Resilience) including rolling stock, and the ensuing regulations if the entity is owned, directed, or subsidized by a country dentified as a priority watch list country by the United States Trade Representative in the most recent report required under section 182 of the Trade Act of 1974 (19 U.S.C. 2242) and is subject to monitoring by the Trade Representative under section 306 of the Trade Act of 1974 (19 U.S.C. 2416).