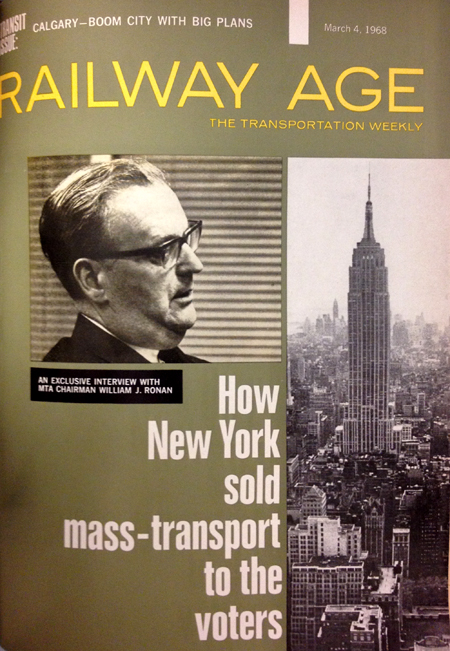 William J. Ronan, generally acknowledged as the architect of the New York Metropolitan Transportation Authority, and who served as its first chairman, died on Wednesday, Oct. 15, 2014 at his home in West Palm Beach, Fla. He was 101.

The following obituary (edited for this website) appeared in the Oct. 17 edition of The New York Times. Written by Sewell Chan and Daniel E. Slotnick, it describes Ronan as “one of the most powerful officials in the modern history of New York State”:

Though Dr. Ronan, a political scientist, never held elected office, he left his stamp on many institutions, including the Port Authority of New York and New Jersey, where he was chairman after leaving the MTA, and New York University, where he was a professor and dean.

With the blessing of Gov. Nelson A. Rockefeller, whom he long served as a close aide and adviser, Dr. Ronan engineered the state’s takeover of the Long Island Rail Road and then outmaneuvered Robert Moses, the master builder of highways, bridges and parks, to secure the takeover of the Triborough Bridge and Tunnel Authority and the New York City Transit Authority.

That move took effect in 1968 with the creation of the Metropolitan Transportation Authority, which now runs the New York City region’s subways, buses and commuter railroads. The agency allowed for highway tolls to subsidize all three, guaranteeing a bountiful stream of money that remains the linchpin of the region’s mass transit financing. So encompassing was Dr. Ronan’s influence and the authority’s scope that critics called it the “Wholly Ronan Empire.”

Tall, brainy and brusque, Dr. Ronan was a tenacious and astute student of politics. He made enemies but dazzled his admirers with his skill at preserving and enlarging his bureaucratic turf. He was more at ease, and arguably more effective, behind the scenes than in the public eye.

As MTA chairman, Dr. Ronan became the face of the transit system and the target of riders’ frustration. He was the subject of subway graffiti, and angry LIRR commuters hanged him in effigy.

“He was able to take the lumps, and, God almighty, he used to get lumps,” said Sidney J. Frigand, who was an aide and spokesman for Dr. Ronan from 1967 to 1973. “Building the MTA., consolidating all the transportation entities, took a tremendous amount of fortitude.”

Dr. Ronan presided over two tumultuous increases in the subway fare: to 30 cents from 20 cents in 1970, and to 35 cents in 1972 (about $2 in today’s money). After the first increase, he received death threats, and the police detailed detectives to protect him. “I was at one point probably the most hated man in New York,” he recalled in a 2005 interview.

William John Ronan was born in Buffalo on Nov. 8, 1912, a child of Irish-Alsatian ancestry who grew up in an Episcopal family of fervent Democrats. (He later described himself as a “Rockefeller Republican.”) His father, William, was a businessman, and his mother, the former Charlotte Ramp, was a homemaker.

He resumed teaching after the war and became a full professor in 1947. From 1953 to 1958, he was dean of what is now the Robert F. Wagner Graduate School of Public Service at NYU— named for a mayor whom Dr. Ronan briefly served as first deputy city administrator.

The MTA evolved from the Metropolitan Commuter Transportation Authority, which the Legislature created in 1965 to buy and run the financially troubled Long Island Rail Road (which was owned and operated by the Pennsylvania Railroad). In 1966, Dr. Ronan resigned as secretary to the governor to devote his full time to the fledgling agency.

Mr. Rockefeller and Dr. Ronan pushed for a regional transportation agency over the objections of Mr. Moses, the chairman of the profitable bridge and tunnel authority. He described the plan as “grotesque” and “absurd.” Mayor John V. Lindsay also opposed the state takeover of the city’s subways. But Mr. Rockefeller and Dr. Ronan prevailed, and the Metropolitan Transportation Authority was born on March 1, 1968.

The next six years were hard ones for Dr. Ronan, who inherited the chronic problems—vandalism, declining ridership and disinvestment—that would plague the transit system until the 1990s.

“We’re making up for 30 years of do-nothingism in mass transportation,” he said in a 1968 interview.

He laid out an ambitious expansion agenda that called for a subway line under Second Avenue, a connection from the Long Island Rail Road to the East Side of Manhattan and the construction of a new subway tunnel under 63rd Street. The first two projects, long dormant, were revived in 2000 and are under construction today (the Second Avenue Subway and East Side Access); the third project was completed in 2001.

Dr. Ronan’s successes in Albany did not translate to popular support for mass transit. In 1967, voters approved a $2.5 billion state bond issue for transportation, but they rejected similar measures in 1971 and 1973. As the New York City fiscal crisis deepened, construction of the Second Avenue subway came to a halt.

Dr. Ronan laid the groundwork for the creation of MTA Metro-North Railroad by acquiring, from the Penn Central Railroad, the New Haven line in 1971 and the Harlem and Hudson lines in 1972. Metro-North went into operation in 1983.

But far from expanding under Dr. Ronan, the subway system actually contracted: The Myrtle Avenue El in Brooklyn shut down in 1969, the Third Avenue El in the Bronx in 1973. When he stepped down in 1974 to become chairman of the Port Authority, The New York Times described him as “the quintessential civil servant” but also as “a transportation mendicant.”

Dr. Ronan’s tenure at the Port Authority was less successful than at the transportation authority.

“His tendency to comment disparagingly about his fellow board members and a sometimes arrogant style undercut his efforts,” the political scientist Jameson W. Doig wrote in “Empire on the Hudson,” a 2001 history of the Port Authority.

There was also the matter of lavish travel expenses. The Times reported in 1977 that Dr. Ronan and other Port Authority officials were flying first-class on business trips abroad (with the agency covering their spouses’ expenses) and had turned the agency’s three helicopters into a “private air force.”

Nonetheless, Dr. Ronan oversaw the addition of one million square feet of cargo space at Kennedy International Airport, the opening of the Journal Square (PATH) transit hub in Jersey City, and a major expansion of the Port Authority Bus Terminal in Midtown Manhattan. He stepped down as chairman in 1977 but stayed on the Port Authority’s board until 1990. He remained a senior adviser to the Rockefeller family until 1980.

After leaving public life, Dr. Ronan was a management consultant and adviser to transportation companies, government agencies and nonprofit organizations and served on several corporate boards. He divided his time among West Palm Beach, New York, and St.-Jean-Cap-Ferrat, France.

Dr. Ronan was loath to be defined by his government work. (A 1968 “Man in the News” profile in The Times described him as “an avid reader of history” who “enjoys the theater and the opera, swimming and golf.”) And he would insist that moving from the halls of academia to the corridors of government power was not always easy for him.

“Some have occupations thrust upon them,” he told The Times, “and in a sense that’s what happened to me.”