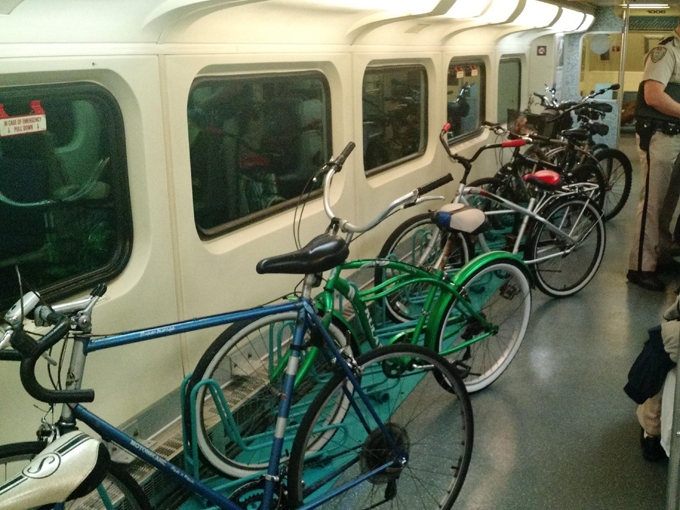 “With more passengers turning to bikes for either the start or final leg of their commute, or both, plus additional leisure riders using the combination of train and bike to explore the region, bike racks have become a necessary amenity for travelers,” said Tri-Rail spokesperson Bonnie Arnold. “Passengers bringing bicycles onboard had previously been limited to two bicycle straps per car, a limit that high demand made impossible to meet. An overflow of bicycles sometimes made traveling on the train challenging.”

The bike car contains 14 racks that will provide more room to maneuver bicycles on and off the train. A set of seats was removed from the lower level of the railcar to make room for the racks; however, the bike car has been added to a standard three-car set, making it a four-car train with additional seating. The car’s exterior features a large bicycle symbol to help passengers identify the correct car prior to boarding; conductors will also assist with station announcements as they arrive at each station.

Nine more coach cars are being retrofitted with bike racks; Tri-Rail says its goal is to have a bike car on every train.

“Tri-Rail continues to encourage the public to use bicycles for trips in combination with the train by providing bike racks at all stations,” Arnold added. “Bicycle lockers are also available at all stations, with the exception of the Pompano Beach and the Miami Airport stations due to recent construction work, though both stations are expected to have lockers available in the near future.”

Tri-Rail is operated by the South Florida Regional Transportation Authority.