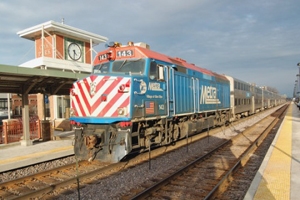 Chicagoland's Metra has awarded Progress Rail Services Corp. a $91.1 million contract to rehabilitate 41 EMD F40PH-2 and F40PHM-2 locomotives to "like new" condition. The locomotives were manufactured between 1989 and 1992.

“This contract is the first of many we expect to approve over the next decade to replace or renovate nearly every car and locomotive in our fleet,” said Metra Chairman Martin Oberman. “We want our riders to know that we are committed to providing the safe, reliable and modern fleet that they deserve.”

The $2.4 billion, 10-year modernization plan, announced last fall, is the first long-term rolling stock plan in Metra history. It calls for renovating 455 cars and 85 locomotives (including the 41 in this contract), and purchasing 367 new cars and 52 new locomotives. That will renew a fleet where more than 40% of the cars date from the Eisenhower administration to the Reagan administration, Metra said.