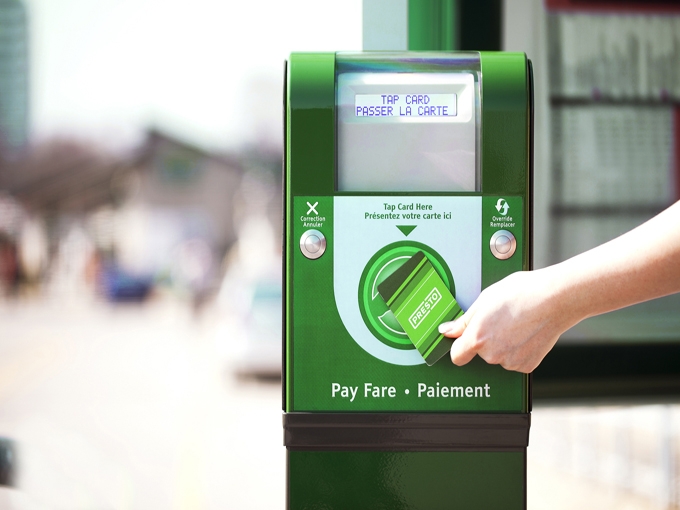 The PRESTO rollout on the Toronto Transit Commission (TTC) continues as dozens of new electronic fare card readers are being brought online aboard legacy streetcars, announced Metrolinx, which developed the PRESTO system in association with TTC, on Dec. 17, 2015.

Following rigorous testing, PRESTO devices are now live on more than 100 of the TTC’s legacy streetcar fleet, with the remaining streetcars coming online by the end of this year.

Work continues to expand PRESTO across the entire TTC network by the end of 2016, with a new, modern TTC fare gate with integrated PRESTO payment to be tested in the first quarter of next year. Once the trial is complete, the fare gates will be installed in the 43 TTC subway stations that are not yet PRESTO-enabled by the end of the year. PRESTO installation and testing will also begin on the TTC’s bus and Wheel-Trans fleets in 2016.

When PRESTO is fully deployed, there will be more than 10,000 electronic fare payment devices in surface vehicles and subway stations to provide the 1.7 million people who ride the TTC each weekday with a modern, fast and convenient way to pay for transit.

“This is great news for all transit riders who take TTC to get to work, school and appointments,” said Steven Del Duca, Minister of Transportation. “PRESTO is critical to our vision of a convenient and integrated regional transit system in the Greater Toronto and Hamilton Area (GTHA). We are continuing to move forward with large transit investments to keep the region moving. This is further proof of our government’s commitment to making the daily commute and quality of life better for Ontario families.”

“The TTC is committed to enhancing fare payment options for our customers,” said Josh Colle, Chair, TTC. “By adding PRESTO to our legacy streetcar fleet, we’ve made it easier for our riders to take the TTC. Adopting PRESTO is another example of our commitment to customer service.”

“PRESTO on Toronto streetcars makes it that much easier for residents in the Toronto area to use transit,” said Adam Vaughan, MP for Spadina–Fort York and Parliamentary Secretary to the Prime Minister for Intergovernmental Affairs. “That is good for the environment, good for transit operators and good for cities looking to solve gridlock. The Government of Canada is happy to help.”

“Bringing PRESTO to all streetcars is making it easier to take transit,” said Bruce McCuaig, President and CEO, Metrolinx. “By rolling out PRESTO across the entire TTC network, we’re helping create even stronger connections throughout our region.”

“The TTC’s adoption of PRESTO is another step in our modernization plan,” said Andy Byford, CEO, TTC . “We look forward to giving our customers another fast, convenient option to pay their fares through PRESTO and eagerly await the full rollout system-wide”.

The first phase of PRESTO rollout was completed at 26 TTC subway stations and on board all in-service new TTC streetcars in time for the Pan Am and Parapan Am Games in July 2015. About 300,000 TTC customers now tap on the subway, using PRESTO each week and over 3,000 customers use PRESTO on board new streetcars each week.

There are now nearly 1.8 million activated PRESTO cards across the GTHA and Ottawa, with an average of 16 million taps per month.

Beyond the TTC, PRESTO is available on GO Transit, UP Express, and eight local transit agencies across the GTHA and Ottawa.

Self-serve reload machines have been installed at 23 of the PRESTO-enabled subway stations, allowing customers to add value to their cards for instant use.