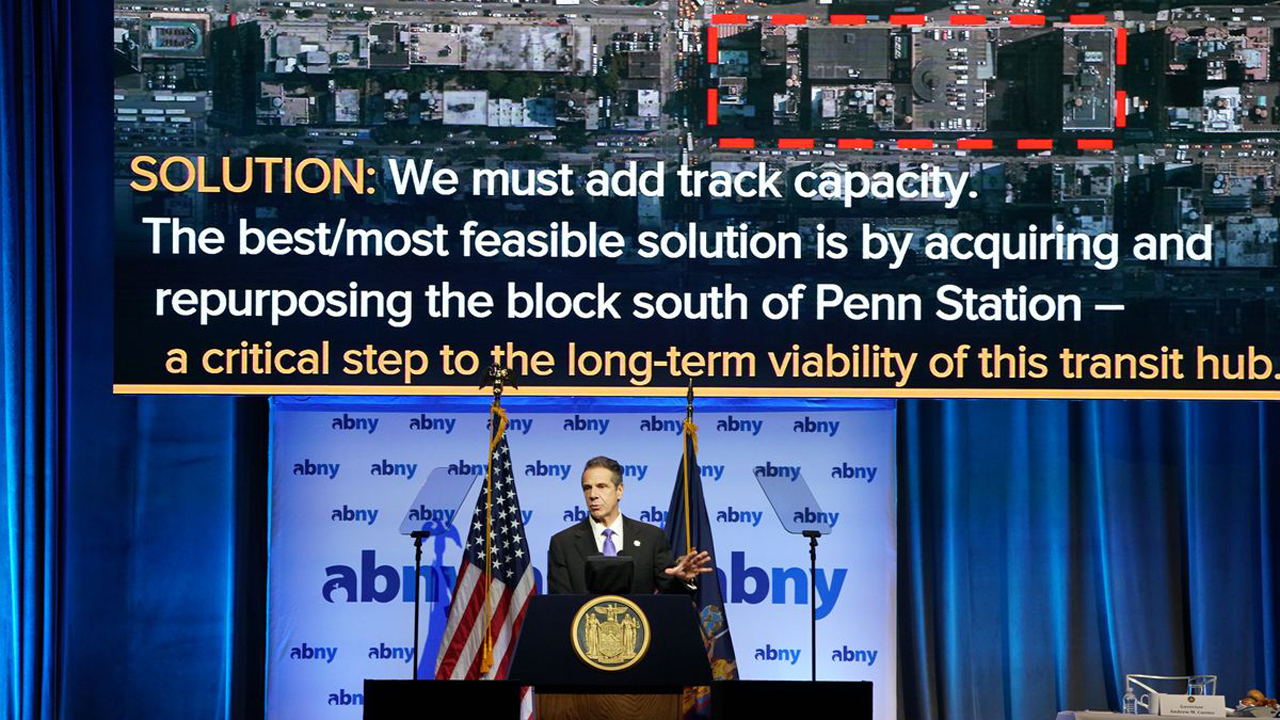 Usually, a career politician carries at least a cost estimate and completion date written on the back of an envelope when making announcements about a major new transportation construction project. When Cuomo doesn’t even have a guess for cost or completion date, odds are very little thought has been given to the idea other than a glossy slide show presentation. Watch your wallet!

Cuomo believes that he can find the funding to pay for his latest Penn Station New York (PSNY) improvement project without government funding. It is known as value-capture, which is Payments in Lieu of Taxes (PILOTs) from developers and income from creation of a new commercial district adjacent to PSNY. This is also dependent upon New York City Mayor Bill de Blasio and the City Council agreeing to allow creation of a state-run development district around the proposed project site.

If Cuomo is so confident of this financing scheme, let him put up his future New York State pension and 401k and mortgage his Westchester home and Social Security benefits as collateral. These can serve as a small down payment to cover the inevitable multi-billion-dollar shortfall in covering the costs, with which taxpayers and riders will inevitably be stuck.

Cuomo and company are probably unaware that, in the early 1990s, the New York Metropolitan Transportation Authority and LIRR conducted the East River Tunnels Life Safety Study. This report clearly documented the need for investing several hundred million dollars to bring the East River Tunnels back up to a state of good repair. All four tunnels, which opened in 1910, outlived their useful lives long ago, and have been in desperate need of major upgrades for decades.

Sadly, since that study, throughout several previous Five Year Capital Plans, the MTA and LIRR programmed insufficient funding to perform these tasks. As a result, there has been an increase in the frequency of major service disruptions due to storm and signal problems in the East River Tunnels. These problems periodically also occur between the Tunnel Portals and Harold Interlocking, west of LIRR’s Woodside Station. The MTA and LIRR also failed to develop and complete a specific implementation plan with Amtrak, which owns the tunnels, to complete this badly needed work within our lifetime.

There is no capacity to run additional trains into or out of PSNY during rush hours via the East River Tunnels with connections to Long Island. This has been the case for decades. Three of the four tunnels running inbound morning and outbound evening rush hours have tight spacing between trains. One tunnel is shared among the LIRR, NJ Transit and Amtrak for reverse train movements with equally tight spacing. There is no platform capacity at PSNY to accommodate additional trains during rush hour. PSNY is currently operating at 100% capacity. Only one of the four tunnels temporarily out of service results in numerous train delays and cancellations.

The four existing East River Tunnels could not possibly support Cuomo’s promise of a 40% capacity increase. Most LIRR trains use tracks 17 to 21, with periodic limited use of tracks 13 to 16. There is no physical connection from the East River Tunnels to tracks 1-4, which are used solely by NJT.

Construction of a new Penn Station South including 4 platforms and 8 tracks will require far more than the previous estimate of $6 billion. Real estate acquisition to assemble the property could cost $2-$3 billion. Construction of the new station could cost $5-$6 billion. This may not include another $1 billion for new connections to NYCT’s Eighth Avenue/34th Street, Seventh Avenue/34th Street and Seventh Avenue/28th Street stations. Riders who transfer from the NYCT Herald Square /PATH 34th Street 6th Avenue station complex will not welcome a longer walk to the new Penn Station South. Ditto for those coming from the Hudson Yards development district.

The existing LIRR West Side Yard is operating at 100% capacity. It is used for midday storage to support evening peak service requirements. A new storage yard or up to 8 layover tracks west of Penn Station South to support midday storage of up to 160 cars (16 trainsets) for eastbound rush hour service may be needed. There will also be the need for bathroom and car cleaning support services. This will add another $500 million to the project cost.

The existing four East River Tunnels are operating at 100% capacity during rush hours and could not connect directly to this new station. As a result, there will be the need for construction of two new East River Tunnels. Scope of work would include construction traversing midtown Manhattan, under the East River and on to Queens. The cost would easily be $6 billion per tunnel. Depending upon location of the Queens-side East River portals, there will have to be additional construction. This will be necessary for access to existing LIRR tracks.

Work would include new tracks, interlockings and signals. It could involve modifications to work previously paid for at and adjacent to Harold Interlocking, which was part of the $11.2 billion Eastside Access project. This additional work could cost several hundred million more.

Imagine if Amtrak and New Jersey Transit also wanted access to Penn Station South. Additional modifications would be required east of the new tunnel portals in Queens. This would be needed for access Sunnyside Yard. Both agencies use Sunnyside for midday and overnight storage. If previously promised access for Metro-North to the existing Penn Station will also include the same for Penn Station South, there will be even more costs.

The LIRR may begin East Side Access service into Grand Central Terminal in December 2022. Most of the promised 24 peak-hour trains will be new trains or those that previously terminated at Atlantic Terminal in Brooklyn. Few will be diverted from PSNY. It is doubtful that the LIRR will give up any current peak-hour train slots at Penn Station when expanding operations into Grand Central Terminal.

Amtrak continues to delay the decades-overdue major repairs to the four East River Tunnels until after the LIRR begins service into Grand Central Terminal. Delaying the start of work by six years from 2019 to 2025 will increase costs by 300% to $1 billion. Continued deterioration of the East River Tunnels over this time period could result in an increased scope of work and accompanying service disruptions. Combined with responses to the procurement process from contractors, this could result in a final price tag of several hundred million more than current engineering estimates.

Only one of the four East River Tunnels can be taken out of service at a time for reconstruction. It will take one to two years to finish work on each. As a result, this project may not be completed until 2030.

The obstacles are staggering:

If Penn Station South could cost up to $18 billion today when you include two new tunnels, midday storage capacity and other key project components not acknowledged by Cuomo, it is anyone’s guess what the final cost could be. It could take up to ten years just to complete the planning study, environmental review process, land acquisition, business relocation, design and engineering, permits, multi-agency operating agreements and financing package before any shovel goes into the ground. Don’t be surprised if Penn Station South doesn’t open until 2040 for passenger service. This is based upon past history for large-scale projects. Penn Station South could be the Big Apple’s version of the infamous Boston Big Dig!

Penn Station South is just another attempt by Cuomo to portray himself as the second coming of President Franklin Roosevelt and Master Builder Robert Moses. He is not an engineer, business person, transportation expert or daily commuter. He has never built a business from scratch or created a significant number of new, well- paying jobs on his own. In the end, his proposal to pay for his latest multi-billion-dollar transportation promise without government assistance will never work. It will have to be a combination of City, State, Port Authority, MTA, Amtrak, New Jersey Transit and Federal Transit Administration funding.

Cuomo continues to remind me of J. Wellington Wimpy, who famously said, “I’ll gladly pay you Tuesday for a hamburger today.” Tuesday may never come for taxpayers. We will have to pay for all the transportation goodies promised by Cuomo within our lifetime.