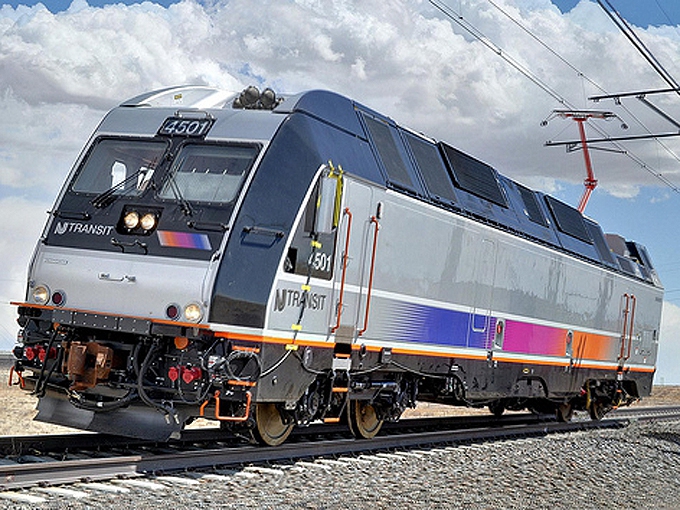 New Jersey Transit is exercising an option with Bombardier Transportation for 17 ALP-45DP dual-power locomotives, to supplement its existing 35-unit fleet.

NJ Transit said it “has undertaken numerous analyses that have concluded the GP40 and F40-series locomotives have reached the end of the service life and are candidates to be replaced with modern locomotives. NJT expects demand for rail travel to grow over the next decade, and increased use of longer trains consisting of multilevel passenger cars is the primary strategy to meet demand. The purchase of 17 additional dual-powered locomotives will allow NJT to replace the oldest passenger locomotives in the fleet with a service-proven passenger locomotive that improves both the versatility and the reliability of the rail fleet.”

The ALP-45DP, which NJT and AMT (Montreal) acquired in a joint procurement, operates in electric mode under AC catenary, and under its own power in non-electrified territory. In non-electrified territory, twin EPA Tier 3-compliant, 12-cylinder Caterpillar 3512HD (High Displacement) diesels running at up to 2,100 rpm provide a combined 4,200 hp, a starting tractive effort of 71,000 pounds, and a top speed of 100 mph. In electric mode, drawing power from catenary, a transformer virtually identical to that in the Bombardier-built ALP-46A provides 5,360 hp of traction power and a top speed of 125 mph.

Changing between diesel and electric modes is simple and does not interrupt head-end power. To change from diesel to electric, the operator engages the Pantograph Up switch. To change from electric to diesel, the operator engages the Fault Reset button. In either case, changeover takes approximately 100 seconds, and there is automated voice acknowledgement. No electrical modifications were required for NJT’s existing cab control cars or trailer coaches, so, in effect, the ALP-45DP is a “plug and play” locomotive.

Designed and engineered by Bombardier in cooperation with STV and the two transit agencies, the ALP-45DP is based upon the four-axle ALP-46A electric, which itself is based upon Bombardier’s European TRAXX locomotive. It shares many components and systems with its electric cousin. Among these are the fully suspended drive system, Bombardier MITRAC® TC3360DPV01 IGBT traction converter, and cab layout. The locomotive weighs in at 284,000 pounds—8,000 pounds less than the threshold for operating at speeds greater than 79 mph on the Northeast Corridor—fully fueled with 1,800 gallons of diesel fuel in four compartmentalized 450-gallon tanks, two for each engine. It is 14 feet, 5-1/4 inches high; 71 feet, 6-1/4 inches long; and 9 feet, 8-1/8 inches wide, with a 71,000-pound axle load. Truck axle base is 9 feet, 2-1/4 inches. The carbody is within Amtrak’s A-05-1355 clearance diagram. Structurally, it meets 49 CFR Part 238 (Tier 1 Passenger Equipment Crashworthiness), 49 CFR Part 229 (Locomotive Crashworthiness), AAR S-580, and APTA SS-C&S-034-99 requirements. The fuel tanks, which are integral with the monocoque carbody, meet 49 CFR Part 223 and AAR S-5506 requirements.