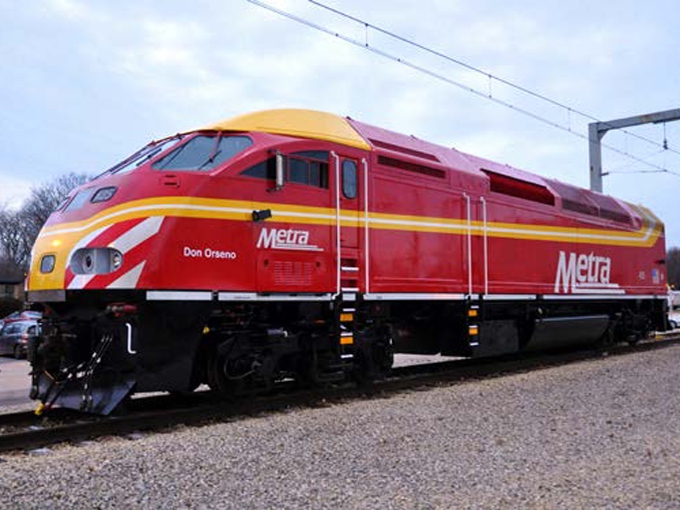 Chicago transit operator Metra honored retiring Chief Executive/Executive Director Don Orseno by naming a locomotive that had been repainted in the red and yellow colors of predecessor Rock Island Railroad.

“Before he heads off into the next chapter, we wanted to be able to show Don what he’s meant to Metra and the railroad industry,” said incoming CEO/Executive Director Jim Derwinski. “There was no better way to honor a man who has devoted so much of his life to the railroad.”

Orseno, who retires at the end of December after 44 years in railroading, began his career on the Chicago, Rock Island and Pacific Railroad. Today, a remnant of that railroad operates as Metra’s Rock Island Line to Joliet, Ill.

The MP36PH-3S (a class purchased only by Metra) had recently undergone a rehabilitation by Metra at its 47th Street Shop in Chicago and was scheduled for repainting when the plan was made to honor Orseno. The red and yellow color scheme was designed by engineer and Chicago-area rail photographer Philip Weibler, and placed in service on the Rock Island in 1969. While the 425 was manufactured by Motive Power Industries, it has an Electro-Motive Division (now Progress Rail), prime mover. Metra said it consulted EMD on the exact color specifications.

Metra for years has named locomotives after Chicago-area towns as well as agency and government officials.

The unit is scheduled to enter service this week on the Rock Island Line.