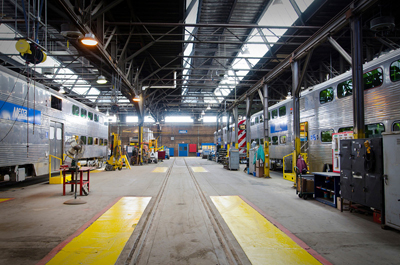 Metra, Chicagoland's regional passenger rail service provider, says it is just more than halfway through a $115 million program to overhaul a total of 176 rail cars (79 cab cars and 97 trailer cars) originally built by Amerail between 1995 and 1998.

“We are extremely proud of this program,” said Metra Executive Director/CEO Don Orseno. “We are giving our riders like-new cars with new amenities, while at the same time we are keeping the work in Chicago, and employing 60 professionals who have years of experience, dedication, and know-how.”

The overhaul, funded by the Federal Transit Administration, is being performed at Metra’s 49th Street Car Shop, employing a specific 36-day process, Metra says. The procedure was designed with the help of Nippon Sharyo and sends each car through a production line-like process. A car will spend nine days at each of four stations, which have been set up with designated tasks to be accomplished before moving to the next station.

Cars begin at Station A, where they are stripped of seats, plymetal floors, doors, heater guards, and bathrooms. New composite floors are installed and the metal diaphragm is replaced with a rubber one. The car will also see its electrical boxes rebuilt. Cab cars receive a new event recorder. 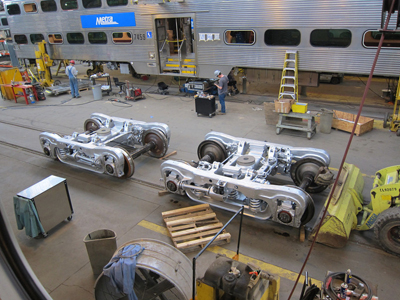 At Station B, the car’s air conditioning and wheel assemblies are removed and sent out to be rebuilt. The car receives a new and upgraded wheelchair lift, new heating, new lighting, and a new retention toilet tank. Additionally, Station B is where a car’s battery charger and battery box are replaced.

With the exception of floor installation, all of a car’s interior work is performed at Station C. The rebuilt wheel assemblies and air conditioning units are installed, new passenger seats to meet current crashworthiness standards are put in place, and the car receives new bathroom walls, LED signs. Cab cars receive new windshields, and windshield wipers.

Station D is the finishing station. A car is equipped with sensitive edge doors, which pop back open if they come upon an obstruction. Paint, decals, and all testing are performed before the car is returned to service.

While all cars are on a 36-day cycle through the overhaul process, cab cars require 3,900 man-hours; trailer cars take 3,400 man-hours for all tasks to be completed.

Bruno Zawisza, shop supervisor, said, “The way the shop is laid out, more of production line aspect, and having all materials kitted makes life easier. This project cuts down on time.”

Metra is on schedule to have all 176 cars overhauled by 2017, and says the overhaul will extend each car’s useful life by 12 to 15 years.