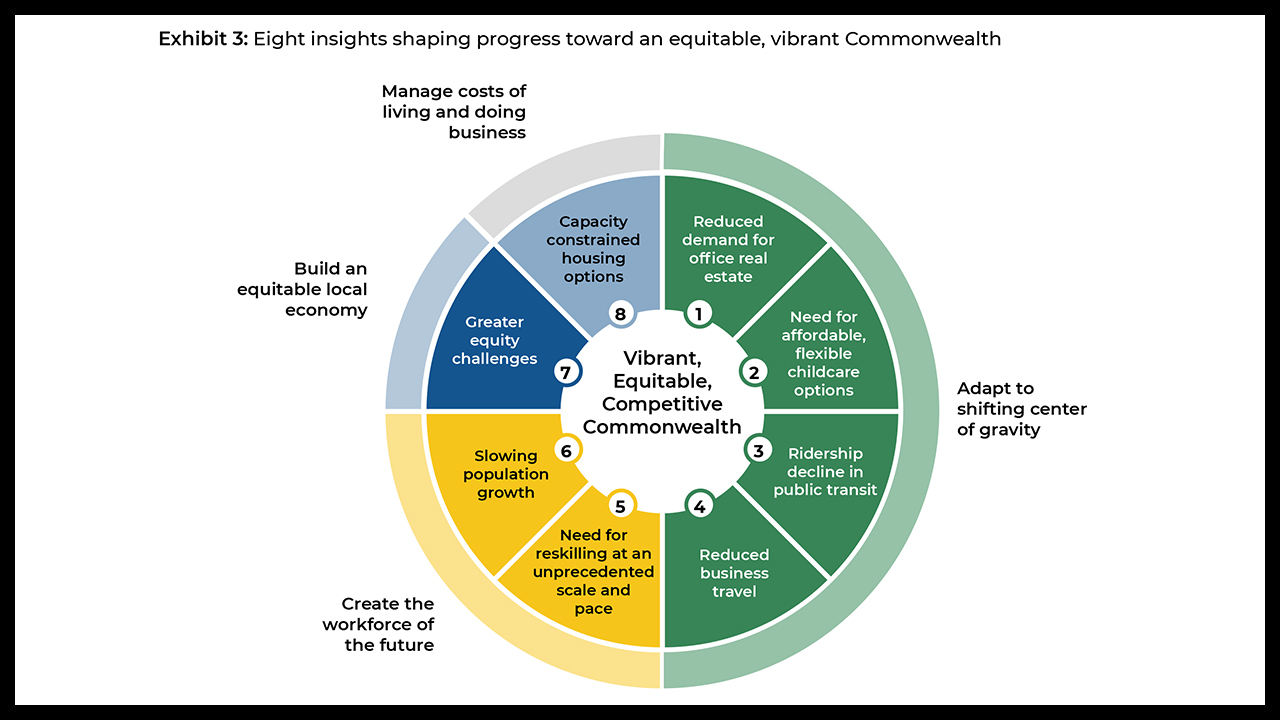 The Commonwealth of Massachusetts on July 13 released a report on work and travel patterns, along with other issues, in the wake of the COVID-19 pandemic. The 82-page study, “Preparing for the Future of Work,” addresses what work could look like in Massachusetts in both the near term (to 2025) and the longer term (to 2030), as well as “what the implications might be for the Commonwealth and its residents across its regions, economic sectors, commercial centers, local downtowns, transportation, and public spaces.”

On April 5, new schedules went into effect on the MBTA rail system that began the move toward a “regional rail” approach. Summer schedules, which took effect on June 28, completed the transition. There is a lot of good news for riders on the T’s trains to and from the suburbs in the schedules, but that could change in the future, according to the report.

The term “commuter rail” has become a misnomer in Boston. The schedules now in effect have not only reversed the service cuts that hit the system last year, but provide the most robust weekday service on the region’s rail lines in recent memory—possibly the most frequent off-peak service ever. In essence, the Boston area no longer even has “peak-commuter” service. The standard on most lines is hourly service throughout the day in both directions, although some lines have a train running every 75 or 90 minutes during mid-day, with service less frequent during the evening. As examples, MBTA’s Fairmount Line to Dorchester runs the most frequently, every 45 minutes, up from pre-COVID hourly service. The last trains of the day leave North or South Station at or about 11:00 PM, early by New York City (NJ Transit, Long Island Rail Road or Metro-North) standards, but not by those prevailing in Beantown.

This represents a complete break from tradition, which called for heavily commuter-oriented schedules. Today, there is no commuter peak at all, except for a few lines that add a train or two to the hourly schedule when the peak used to occur. With these new schedules, the T has followed the lead of San Francisco’s Caltrain, which now runs half-hourly for most of the day on weekdays and hourly in the evening and on weekends. The MBTA’s website still refers to the trains as the “Commuter Rail” component of the T, but this is now a misnomer. Trains are now spaced relatively evenly throughout the day, for the first time in the agency’s history or that of its predecessor railroads. This is in sharp contrast to a half-century ago, when many lines only ran a few trains during historically peak-commuting hours.

Weekend service on the T  took a big hit last year; disappearing completely on all except five lines. Now it’s back on all. Trains on most lines run every two hours, as they do in Chicago and Philadelphia. On the Fairmont Line, they run every 90 minutes. Until now, Sunday service began later in the morning than Saturday service, and there were no Sunday trains on the Needham Branch. With the new schedules, Saturday and Sunday service are the same on every line. The current schedules do offer new service concepts.

Against this backdrop, Massachusetts Gov. Charlie Baker and Lt. Gov. Karyn Polito issued “Preparing for the Future of Work,” a comprehensive document that deals with many issues besides new work and commuting habits. The Administration commissioned it “to evaluate the ways that the COVID-19 pandemic has changed work habits in Massachusetts as the Commonwealth emerges from the pandemic. The Administration also outlined steps that it is taking to address the key findings of the report, with investments and other initiatives to boost housing production and downtown economies, connect workers with skills for high-demand fields, support changing transportation needs, promote flexibility in child care, and more.”

The report takes a state-wide approach, as Polito said: “The Future of Work Report provides us with a blueprint for building up the Commonwealth’s housing stock, workforce, downtown economies, and infrastructure.” Its eight “core insights” deal with child care, business travel (by airline), workforce training, demographics, equity challenges, and specifically equitable housing opportunities.”

Only two of the eight core insights deal with transit and travel to work: “Demand for office real estate may fall as workers spend more time in residential areas due to hybrid work”, and “Public transit ridership is likely to fall, with the steepest decline likely in commuter rail … Commuter Rail’s new Regional Rail Schedule represents a shift toward more-consistent, regular service throughout the day, compared to pre-pandemic service that was heavily skewed toward AM and PM rushes. These adjustments reflect analysis of ridership trends throughout the pandemic and into the recovery. The new Regional Rail Schedule supports increasing travel habits like intra-line (non-Boston) trips and reverse commutes to Gateway Cities. It also supports teleworkers’ local trips and three-day-per-week commuters.”

The MBTA is implementing solutions with its new schedules. The Administration noted the importance of weekend service: “Continued promotion of weekend service, such as $10 weekend passes, will also promote travel to key recreational and tourist destinations outside of Boston. For example, thanks in part to this Commuter Rail promotion, Salem is seeing 110% of 2019 weekend ridership this year.” The statistic about Salem ridership many be questionable, though. For the first 25 weekends this year, there was no service on the nearby Lowell and Reading/Haverhill Lines, so Salem may have gained riders who might have used those lines instead. Still, the report expressed a positive attitude about weekends.

The report sounded some cautionary notes about transit, especially in Boston and its suburbs. For example: “Changing ways of working—such as hybrid and remote work—may shift the center of gravity away from the urban core, further reinforced if business travel decreases … Previously, the urban cores in Massachusetts had a large commuter population (for example, approximately 245,000 workers traveled into Boston from surrounding areas in 2019). A shift to remote/hybrid work and spending more time closer to home could have far-reaching implications on transit, urban vitality, housing … local congestion and childcare needs..

There were other disquieting predictions: “Demand for Office Real Estate May Fall as Workers Spend More Time in Residential Areas Due to Hybrid Work” and “Public Transit Ridership is Expected to Fall, With the Steepest Decline Likely in Commuter Rail; a 15% to 50% Drop.”

The extent of change may exceed that predicted in the report. The methodology examined three scenarios:

Statistical information was used to create models for employment, remote work potential, real estate, transportation ridership, and other variables. There was an assumption throughout the report of a modal shift from transit to automobiles, although there was no advice offered concerning how to mitigate it. An advisory committee (named at 78) was comprised of “establishment” figures from industry, academics and other large institutions, but nobody on the list was in a position to express the transit rider’s point of view.

Also missing from the report was consideration that a major change in work culture is now under way; that remote working will catch on more strongly than the report’s projections indicate. That sort of trend could indicate a greater challenge for regional rail, as well as new opportunity.

How will this play out as the COVID-19 pandemic recedes into memory and life in Massachusetts and elsewhere becomes more active? The new schedules constitute a major step in the right direction. Maybe they will help the T to meet the challenges ahead. Maybe the next step will be to recognize that Commuter Rail is an obsolete name that should be changed to Regional Rail to comport with current ridership and schedules.

Commuting Post-COVID – First in a Series: To Commute or Not to Commute? That is the Question!

Commuting Post-Covid – Final in a Series: From “Commuter Railroads” to “Regional Railroads”