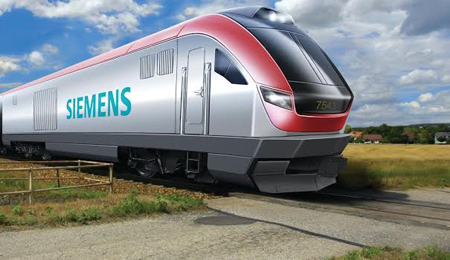 The Maryland Transit Administration (MTA) has decided to phase out its 10-unit fleet of AEM7 and HHP8 electric locomotives used for MARC regional/commuter rail service and replace them with eight new 125-mph “Charger” diesel-electric locomotives from Siemens Industry.

The MTA plans to ask Maryland’s Board of Public Works for permission to piggyback on an Illinois DOT contract with Siemens to acquire the locomotives, for an estimated $58 million. Amtrak, which has been maintaining MARC’s electric fleet since 1983, will no longer be able to provide the service as of June 2016 because it has retired its own HHP8 locomotives and is phasing out its AEM7s as new Siemens ACS-64 electrics enter service.

The Charger locomotives, which are based technically on the Siemens Eurosprinter, Eurorunner, and Vectron locomotive platforms, feature a primary traction drive consisting of a 4,400-hp-rated 16-cylinder Cummins QSK95 diesel engine with a cubic capacity of 95 liters. The QSK95 complies with EPA Tier IV emissions regulations. The 120-ton (approximate) Charger locomotive offers a starting tractive effort of 65,200 pounds (290 kN).

MARC’s four EMD/ASEA-produced AEM7s, like Amtrak’s, are approaching 30 years in age. Its six-unit HHP8 fleet, also like Amtrak’s, is only about 15 years old but has suffered from reliability and availability problems. (The HHP8 was part of Amtrak’s Acela Express trainset contract with a Bombardier/Alstom consortium in the late 1990s.)

According to a report in the Baltimore Sun, MTA spokesman Paul Shepard said that replacing the electric fleet with diesels will improve MARC’s service reliability and will “enhance the passenger experience.” The electric locomotives operate only on MARC’s Penn Line (Northeast Corridor) between Perryville, Md., and Washington D.C. Union Station. The agency’s existing 33 diesel locomotives are used on the Camden (Baltimore Camden Yards Station-Union Station) and Brunswick (Martinsburg, W.Va.-Union Station) lines as well as the Penn Line.

“Concerns about the reliability of MARC peaked in June 2010 when a Penn Line train with an [HHP8] electric locomotive stalled outside Washington in 100-degree heat and the passengers were stranded for two hours,” the Baltimore Sun reported. “The so-called ‘hell train’ incident became an issue in the 2010 gubernatorial election between then-Gov. Martin O’Malley and former Gov. Robert L. Ehrlich Jr.”

Shepard said MARC’s electric fleet has a reliability rating of between 40% and 50%. Its diesel fleet, most of which was replaced about five years ago with 26 MP36PH-3C units from Wabtec subsidiary MotivePower Industries, has a reliability rating of 85%. MARC’s diesel fleet also contains six EMD GP39H-2s, which are scheduled for repowering, and one EMD GP40WH-2, used as standby power.

MARC’s Charger locomotives are expected to be delivered by late 2017. As of Aug. 12, 2015, a date had not been scheduled for the matter to go before Maryland’s Board of Public Works. It had been on the board’s Aug. 5 agenda but was withdrawn after a losing bidder filed a complaint with the federal government. Shepard said the MTA “believes the complaint has no merit but it would likely take several weeks to resolve.”