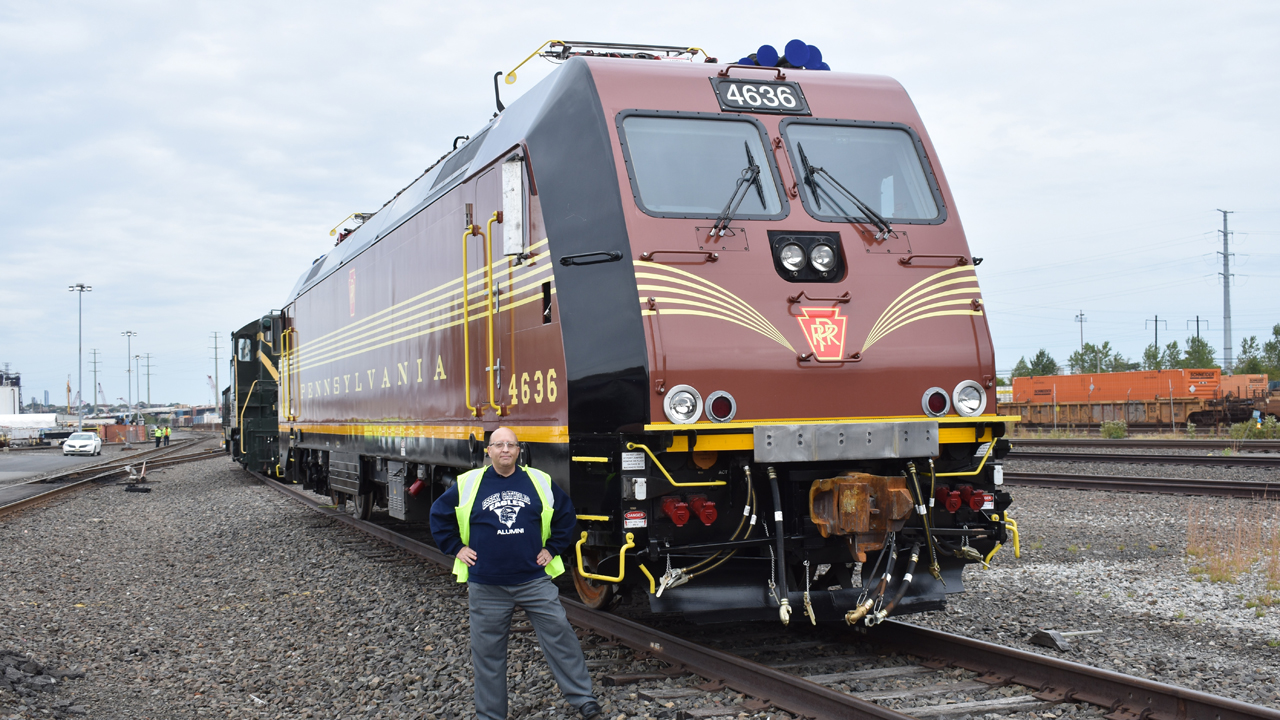 Railroads in many ways are unique because, regardless of how many years they’ve been in business, there is usually a storied history that can be recalled. The best way to do that is by applying classic paint schemes from predecessor companies, or “fallen flags,” to the railroad’s most visible public faces—its locomotives, among the largest land vehicles anywhere. Union Pacific and Norfolk Southern, among others, have done this to much acclaim. Now, New Jersey Transit, which I like to call my “home” railroad, has joined the fold, and the results, in my opinion, are simply beautiful, inspiring.

NJT is a state-run public agency, with all the associated “challenges” (problems, in non-politically correct terms) such an organization faces: meddling politicians, funding shortfalls—you know what I’m talking about, no need to expand here! But NJT Rail Operations (NJTRO), thankfully, still has the heart and soul of a railroad, and that means people—real railroaders—who know what it means to honor one’s heritage.

A few of them got together recently to discuss how to commemorate NJT’s 40th anniversary of incorporation, which occurred in 1979, four years before Conrail divested passenger train operations to NJTRO in 1983: Ray Kenny, Senior Vice President and General Manager Rail Operations; Matt Reddell, Vice President and Assistant GM, Rail Operations; Dave Abeles, General Superintendent, Stations; and Jeannie Kwon, Senior Vice President and Chief Administrative Officer. Steve Friedland and Rich Wisneski, both of whom manage inter-carrier agreements for NJTRO, developed the liveries. Steve and Rich were assisted by System Train & Engine Compliance Officer (that’s a fancy name for “Road Foreman”) Fred Mattison (below)—the engineer in my 2016 video of an ALP45-DP cab ride—and local rail history experts. A licensing agreement was executed with Conrail, the owner of the predecessor railroad names and likenesses. Conrail also reviewed the conceptual drawings prior to production.

Before I came to Railway Age in 1992, I’d been an “enthusiast” of sorts (well, OK, you can call me a “closet foamer” or “train spotter” if you like). My railroad of choice was the fabled Pennsylvania Railroad, better known as the “Pennsy” or “PRR.” Growing up in the North Ward of Newark, N.J., in the 1960s, my first exposure to railroads was Public Service City Subway PCC car rides with my dad to Penn Station Newark, with visits to the train platforms, where I would gape in awe at the dusty brown locomotives and passenger cars pulling in. Years later, I’d learn that those were GGI electrics pulling PRR trains. And every once in a while, I’d see diesel trains hauled by multi-colored locomotives with a long name I could never remember—Erie-Lackawanna—rolling through the big grade crossing at Mt. Prospect Avenue.

Seven years after graduating from Essex Catholic High School in 1977 (that explains the shirt I’m wearing in the top photo), my family moved to the Jersey Shore, where I still live. It was there that my interest in the PRR really jelled.

But enough about me.

In unveiling the locomotives you see here, NJT noted that “throughout the 1970s, the American railroad industry was struggling, especially in the Northeast … Railroaders always come together to persevere through adversity … These locomotives will work in revenue and company service around the system to remind us of the great railroaders who came before us.”

ALP46A electric 4636 pays tribute to its legendary predecessor, the PRR GGI, the final unit of which, 4877, NJT retired in May 1983 from North Jersey Coast Line service. 4877 had been repainted into its original Raymond Loewy-designed PRR Tuscan Red/five-pinstripe scheme prior to retirement. That scheme, done as a vinyl wrap, looks like it was made for 4636. The application retains one NJT element, the black carbody accent originally developed for this locomotive by industrial designer Cesar Vergara, whose work is inspired by Loewy, his legendary predecessor. The PRR built what is today NJT’s Northeast Corridor Line, as well as parts of the North Jersey Coast Line.

ALP45-DP (dual power) 4519 pays homage to the Erie- Lackawanna, created by a merger of the Erie and the Delaware, Lackawanna & Western in 1960. The E-L operated several lines on what is now NJT’s Hoboken Division, consisting of the Morristown Line, Main Line, Bergen County Line, Monclair-Boonton Line, Pascack Valley Line and Gladstone Branch, all of which serve Hoboken Terminal. 4519 has been decorated in the E-L’s distinctive gray, maroon and yellow passenger locomotive scheme. (It, too, retains the Cesar Vergara-designed black accent stripe originally applied to this carbody style, which is based on the ALP46. Bombardier Transportation supplied both locomotive types to NJT.)

GP40PH-2 4109 is unique in this collection of heritage units in that it has been repainted (not wrapped) into its original Central Railroad of New Jersey (CNJ) solid blue scheme. It is one of 13 GP40Ps built in October 1968 for the CNJ and paid for by the New Jersey Department of Transportation (NJDOT). Shortly after NJTRO inherited these units from Conrail in 1983, the steam generator, which had occupied the end of the locomotive’s long hood, was replaced with a diesel HEP generator, and the units were reclassified as GP40PH. They were rebuilt as GP40PH-2 units in 1991–92; some are still in service. The NJTRO mechanical department selected 4109 to be restored to its original livery, and plans to place it in revenue service following replacement of its HEP equipment. The CNJ built its main line west across New Jersey in 1848 by combining other smaller railroads to haul anthracite coal from the Pocono Mountains to Tidewater. The railroad, which went bankrupt in 1967 and was merged into Conrail in 1976, built the lines operated as today’s Raritan Valley Line and parts of the North Jersey Coast Line.

All the locomotives were shopped during their regular maintenance cycles. Each was in need of new paint. For example, CNJ 4109 was last painted in 1992. NJT says the vinyl wraps are “expected to last more than seven years, and the paint even longer.”

Most of the work was carried out by NJTRO in-house mechanical forces under the direction of Charlie Thomaszfski, General Superintendent Equipment at the Meadows Maintenance Complex. Scott Gaburo coordinated the project with approximately 10 workers. The decals/wraps vendor assisted in application to the locomotives.

So … now that NJT has a PRR ALP46A, E-L ALP45-DP, and a CNJ GP40-PH, how about a PL42AC diesel in Lehigh Valley colors, another ALP46A in PRR (Brunswick Green, 5-stripe or single stripe; or Tuscan Red, single-stripe), an ALP45-DP in any of the four PRR schemes, another GP40-PH in the green CNJ livery, or anything running on the Atlantic City Line in PRSL (Pennsylvania-Reading Seashore Lines). A nice yellow and green Reading unit would be a bit of a stretch, but …