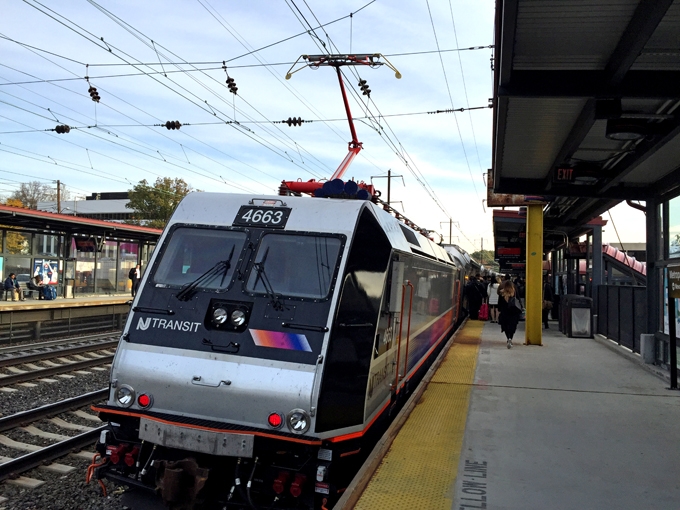 It takes tenacity—and lots of capital—to keep one of the nation’s largest rail transit systems rolling.

It usually isn’t a good idea in the journalism business to use superlatives—words like “largest,” “fastest,” “heaviest” or “strongest.” However, when writing about New Jersey Transit, “unique” would be a perfectly acceptable word to use.

The nation’s third-largest transit agency, now 32 years old, is the only one that covers an entire state (and the argument, “So what? New Jersey is a geographically small state” doesn’t hold water, because it is the most densely populated, with the highest mobility needs). Its capital budget rivals that of some Class I railroads. It operates more trains on the Northeast Corridor than Amtrak, though it technically is only a tenant. Its rail system encompasses just about every mode commuter/regional, electrified light rail, diesel light rail. It is the only U.S. rail system to operate dual-power (AC catenary/diesel) locomotives. It was the first U.S. system to open a DLRT (diesel light rail transit) system, the River LINE. On any given day, you can see single- or multi-level railcars hauled by an ALP46 electric, diesel or ALP45DP dual-power locomotive. You will also see electric multiple-unit cars.

And let’s not forget the massive bus fleet. This may be a rail publication, but we would be remiss if we did not at least acknowledge that NJ Transit’s rail and bus systems are quite well-integrated.

Running NJT is an arduous task, not only because of its operational complexity, but because of the fact that this is, well, New Jersey, a state whose highly contentious politics (and frequent political scandals) are nationally known. Typically, some legislators in the State House in Trenton act as though they should be in charge of running the state’s public transportation system. This is true of the current governor, Chris Christie, who is not known for being a hands-off, let-the-professionals-run-the-trains politician. Christie is currently running for President of the United States, a situation that makes funding NJT more problematic than usual.

What do Christie’s presidential aspirations have to do with NJT’s operational and capital budgets? It goes like this: New Jersey’s highly stressed transportation infrastructure—roads, bridges, railways—is dependent upon the state’s Transportation Trust Fund (TTF), which is funded entirely by gasoline taxes. New Jersey has one of the lowest gasoline taxes in the nation, and that tax has not been raised since 1988. That’s right—27 years. Many legislators in Trenton believe that the only way to shore up the TTF is to raise the gas tax. They correctly point out that New Jersey is a “corridor state,” a crossroads where, for example, most of the long-haul truckers tearing up the pavement on the New Jersey Turnpike are just passing through town.

But raising taxes of any kind always has been a political non-starter in New Jersey. The governor, if he has any hopes of winning the Republican presidential nomination (and by most accounts, his chances are roughly zero), must stick to his no-new-taxes guns. What’s good for the country is good for New Jersey, so if Christie has anything to do about it, the gas tax will not be raised as it needs to be. Meanwhile, the TTF is just about bankrupt, with nearly 100% of its revenues going toward debt service. Creative refinancing isn’t going to work anymore, and the state is running out of options.

This is the situation that NJ Transit Executive Director Veronique “Ronnie” Hakim is doing her best to manage. A skilled and personable transportation executive with a long track record in the New York metropolitan area, she finds herself in the unenviable position of having to raise fares to close a gap in NJT’s operating budget. She is also dealing with NJT’s rail unions, which have been in virtual deadlock with management for four years, without a contract renewal, and are now working under a Presidential Emergency Board. Yet, Hakim has managed to gain the trust and confidence of many of the state’s public transportation advocacy groups and of legislators who deal with transportation issues, according to people with whom Railway Age has spoken. Hakim is only the second woman to hold the Executive Director’s post, after Shirley A. DeLibero in the 1990s. “Shirley,” as she was affectionately known by her employees, got things done, and left her mark on the agency. Ronnie will most likely do the same.

Enough about politics. Over the past two years, NJT, despite TTF troubles, has doubled its capital budget, to $2 billion in this fiscal year. There are a host of major programs under way, ranging from new rail vehicles to hardening assets against natural disasters like Superstorm Sandy, which inflicted heavy damage on NJT equipment and infrastructure when it tore through the state in October 2012.

NJ’s MultiLevel railcars, supplied by Bombardier, are fast becoming the agency’s standard-bearer for regional/commuter service. Popular with passengers, and possessed of a particularly good ride quality, their success has prompted NJT to decide to go with an electric multiple-unit (EMU) version to replace the classic yet aging single-level Arrow III EMU cars, which were overhauled in 1993 and are approaching the end of their service life. Within the next six months, NJT will be releasing a request for proposals for approximately 113 multi-level EMUs. The specification will call for these cars to be configured in married pairs consisting of one powered and one non-powered unit. None will have operating cabs. Instead, they will be fully compatible with the existing Bombardier MultiLevel fleet, affording NJT the opportunity to create EMU consists limited in size only by station platform length.

Along the same lines of extra length for extra capacity, NJT has completed testing of a prototype extended light rail vehicle for the Hudson-Bergen Light Rail (HBLR) and Newark Light Rail (NLR) systems. Thirty-five are on tap—25 for HBLR, 10 for NRL. In a program similar to that of Dallas Area Rapid Transit, Kinkisharyo, builder of the HBLR and NLR LRVs, is supplying expansion modules to transform 35 existing LRVs into five-unit articulated cars. NJT shop forces will perform the stretching.

Among NJT’s numerous state-of-good-repair projects are overhauling the Alstom/EMD PL42AC diesel fleet, and rebuilding several old standbys: GP40PHs, which will see service in the New Jersey Meadowlands for Giants and Jets football games as well as the planned “American Dream” commercial/residential development project there (a successor to the planned but never implemented Xanadu project).

Significant rehabilitation is under way on many smaller bridges throughout the rail network. This is in addition to the regular track, signal and traction power programs that must be performed on a system that operates several hundred trains every day.

Like all U.S. passenger rail systems, NJT is dealing with installing Positive Train Control, a $225 million expense made all the more complicated because onboard equipment must be installed on 14 different types of rail vehicles. So far, only two have been prototyped, and NJT is counting on the three-year extension of the PTC deadline currently before Congress and expected to be passed by year’s end. The agency’s PTC technology, ASES (Advanced Speed Enforcement System) II, is fully compatible and interoperable with Amtrak’s ACSES (Advanced Civil Speed Enforcement System) on the NEC. Parsons Transportation Group is the system integrator; Alstom is the supplier.

As a stopgap safety measure until PTC is finished, as of Nov. 1, NJT will have completed installation of civil speed enforcement that utilizes induced speed restrictions tied to its existing cab signal technology at 14 curves throughout the system. This is the same relatively simple (compared to PTC) plug-in that most likely would have prevented Amtrak’s Frankford Curve and Metro-North’s Spuyten Duyvil fatal wrecks, had it been in place. (It has since been installed.)

Superstorm Sandy hit NJT like a bomb, causing hundreds of millions of dollars worth of damage. In response, the Federal Transit Administration has allocated NJT $1.72 billion of Public Transportation Emergency Relief Funds to date.

NJ TRANSITGRID is particularly interesting, as it involves construction of a standalone power plant to supply traction power for electrified territory, including the NEC. “This is not strictly a backup system for the commercial power that we normally purchase,” explains Assistant Executive Director, Capital Planning & Programs Steve Santoro. “Though it will take over traction power supply if the commercial grid goes down for any reason, we will use it to generate as-needed supplementary power.”

The Train Control & Communication Resiliency Project involves hardening the rail operations center (ROC), located at the MMC. NJT is also establishing an emergency operations center at its bus maintenance facility in Maplewood, N.J. The center will expand the role of the Office of System Safety, functioning as a location for senior management to operate the entire NJT system in the event of a natural disaster or other emergency.

As the principal train operator on the NEC, which 80% of NJT customers touch in some way, either through direct service or transfers, the agency pays Amtrak a considerable sum in access fees, and also invests heavily through various joint facilities agreements. Currently, NJT’s annual “rent” is $80 million. Add to that some $20 million in contributions to Amtrak capital programs. Under PRIIA, a new cost allocation model was established based on usage. The formula increased NEC access fees considerably, but NJT is, at least publicly, in step with the changes. The successor legislation to PRIIA that will be enacted as part of a six-year federal transportation funding program now in play on Capitol Hill will undoubtedly raise the rent. As Ronnie Hakim puts it, parsing her words a bit carefully (as she undoubtedly must, given her position), “A very high level of investment in the NEC is needed, and we are the primary user of the NEC,” from Sunnyside Yard in Queens, N.Y., through Morrisville Yard in Pennsylvania, just across the Delaware River from Trenton.

To that end, NJ Transit is working closely with Amtrak on planning and engineering for two new Hudson River tunnels that are the foundation of Amtrak’s $20 billion Gateway Project to improve access to Penn Station New York, the destination for most NJ Transit customers. The agency has taken the lead in NEPA (National Environmental Policy Act) procedures associated with the project.

Perhaps Gov. Christie will make Gateway one of his priorities when he decides to stop dabbling in presidential politics and concentrate on his home state. He killed the ill-fated ARC (Access to the Region’s Core) project a few years ago after it morphed into “The Tunnel to Macy’s Basement” project, a stub-end station that would have served only NJ Transit.

Whether Gateway will come to fruition in the foreseeable future is uncertain. Christie and his New York counterpart, Andrew Cuomo, along with the Port Authority of New York & New Jersey, have pledged financial support. Now it’s up to the federal government to pony up the funds to punch those critically needed tunnels under the Hudson, and expand Penn Station New York for the mutual benefit of NJ Transit, Amtrak and Long Island Rail Road customers.