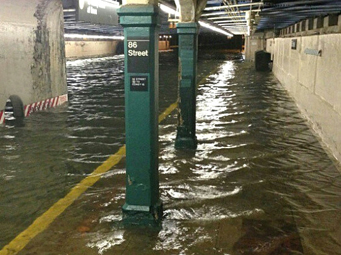 Hurricane Sandy, the worst storm of its type to hit the New York-New Jersey metropolitan area in generations, had a devastating impact upon the region’s passenger rail systems, the busiest in the nation.

Literally millions of people who depend upon commuter/regional, rapid transit, light rail, and intercity trains every day have been left without service following extensive damage. Service will be unavailable for at least a week on most lines as crews feverishly work to repair billions of dollars in damage from the so-called “super storm.”

The New York City subway system has sustained the worst damage it has ever experienced in its 108-year history. Service remains suspended on all lines, as cleanup and water remediation efforts continue, especially in underwater tunnels linking Brooklyn and Manhattan that were flooded during the storm.

In the aftermath of Hurricane Sandy, both Long Island Rail Road and Metro-North Railroad service remains suspended system-wide, as damage assessment and repair work continues on the nation’s two largest commuter railroads. Crews on both railroads are removing downed power lines and trees along the rights-of-way, in addition to removing mud and other debris that washed up onto the tracks. 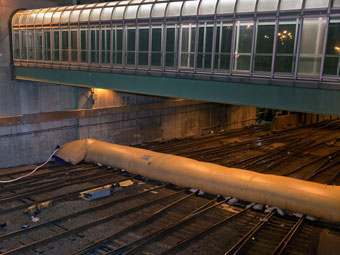 The Long Island Rail Road sustained damage in its West Side Yard in Manhattan and suffered flooding in two of the four East River tunnels it shares with Amtrak and New Jersey Transit. The LIRR is undertaking a comprehensive assessment of its 700 miles of track, including its train storage yards in the wake of the storm. In conducting the assessment of the LIRR’s eleven branches, crews have removed over 140 trees throughout the system with many more yet to be removed. In Long Island, thr Port Washington and Oyster Bay branches and the Port Jefferson Branch east of Huntington had some of the heavier concentration of downed trees. Some of the fallen trees encountered on the Oyster Bay and Port Jefferson branches are as large as six feet in circumference. On the Babylon Branch in the vicinity of Amityville, three 90-foot high-tension utility poles snapped and are leaning over the tracks. There are also downed power lines in some areas.

“It is still too early to say how long it will take to restore the system to full service,” MTA said. “This is will be an exhaustive, time-consuming process with one goal: to restore safe and efficient service to 8.5 million daily MTA customers. It must be noted, however, that this process could have taken much longer had we not taken the pre-emptive measure of suspending all service to safeguard our equipment and prepare facilities to the best of our ability.” 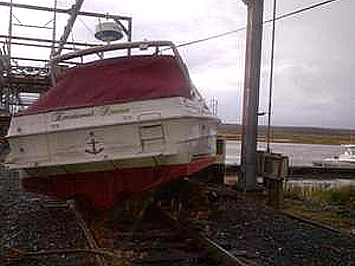 The situation is somewhat grimmer on New Jersey Transit, which operates the nation’s third-largest commuter rail system as well as three light rail lines. “While this destructive and deadly storm is now gone, it has left behind long-term mechanical and operational challenges that NJT is working tirelessly to overcome,” the agency said. “This will take time, and the blow delivered by Hurricane Sandy will continue to impact customers for days to come.”

NJT entire regional/commuter rail and LRT service will remain suspended until further notice. There is currently no estimated time for service resumption, due to widespread damage to critical infrastructure. The agency’s Rail Operations Center is engulfed in water, which has damaged backup power supply systems, the emergency generator, and the computer system that controls the train movements and power supply to catenary on electrified lines. There are numerous downed trees across the rail system, which have caused damage to catenary and signal cables. There are rail washouts across the system, including on the North Jersey Coast Line and Atlantic City Rail Line, and at Kearny Junction, a critical link for MidTOWN Direct service to New York City. Several rail stations are flooded, including Hoboken Terminal. Morgan Drawbridge on the North Jersey Coast Line in South Amboy sustained damage from boats and a trailer that collided with the bridge.

Like NJT’s regional/commuter rail lines, Hudson-Bergen Light Rail, Newark Light Rail, and RiverLINE service will remain suspended until further notice, with no estimated time for resumption. Newark Light Rail sustained flooding in Newark Penn Station, as well as major debris damage between Newark Penn and Branch Brook Park stations in North Newark. Hudson-Bergen Light Rail experienced track washouts at Port Imperial and West Side Avenue stations, as well as trees in the overhead wire in Weehawken and flooding in Hoboken. The RiverLINE sustained no significant damage to equipment or infrastructure; however, due to a loss of commercial electricity between Camden and Trenton, there is no power to operate signals and switches.

Service on the Port Authority of New York and New Jersey’s PATH rapid transit system is expected to be out of service for, at minimum, a week to 10 days due to extensive flooding in the system’s two sets of Hudson River tunnels, Hoboken Terminal facility, and other locations. 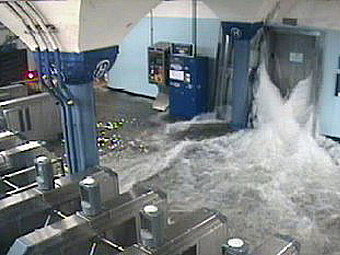 Most of Amtrak’s hurricane damage occurred on the Northeast Corridor east of Newark, N.J. “As in the case of other tunnel owners and operators in New York City, Amtrak is removing water and making repairs to track, signal, and power systems within its tunnels under the Hudson and East rivers,” the railroad said. “The amount of water intrusion into the tunnels is unprecedented—as was the storm itself—so a date for restoration of Amtrak service directly to/from New York Penn Station from either the north or south is not available at this time.”

There is no Northeast Regional service between Newark and Boston and no Acela Express service for the length of the Northeast Corridor (Boston to Washington D.C.). At Newark Penn Station, there is no connecting service to New York City and no elevator or escalator service. Service to the Newark Liberty Airport rail station is suspended due to a lack of connecting services. Also suspended is the Empire Service between New York City and Buffalo/Niagara Falls, the Adirondack to and from Montreal, Québec, Canada, and the Ethan Allen Express to and from Rutland, Vt., due to track damage south of Albany-Rensselaer, N.Y., along the Hudson River.

Amtrak is providing modified Northeast Regional service between Newark and points south, including restoring Virginia service to Lynchburg, Richmond, and Newport News, Va. Amtrak is also operating Keystone Service trains between Harrisburg, Penn., and Philadelphia, and modified Downeaster trains between Boston and Portland, Me., along with some overnight services to and from the Northeast.