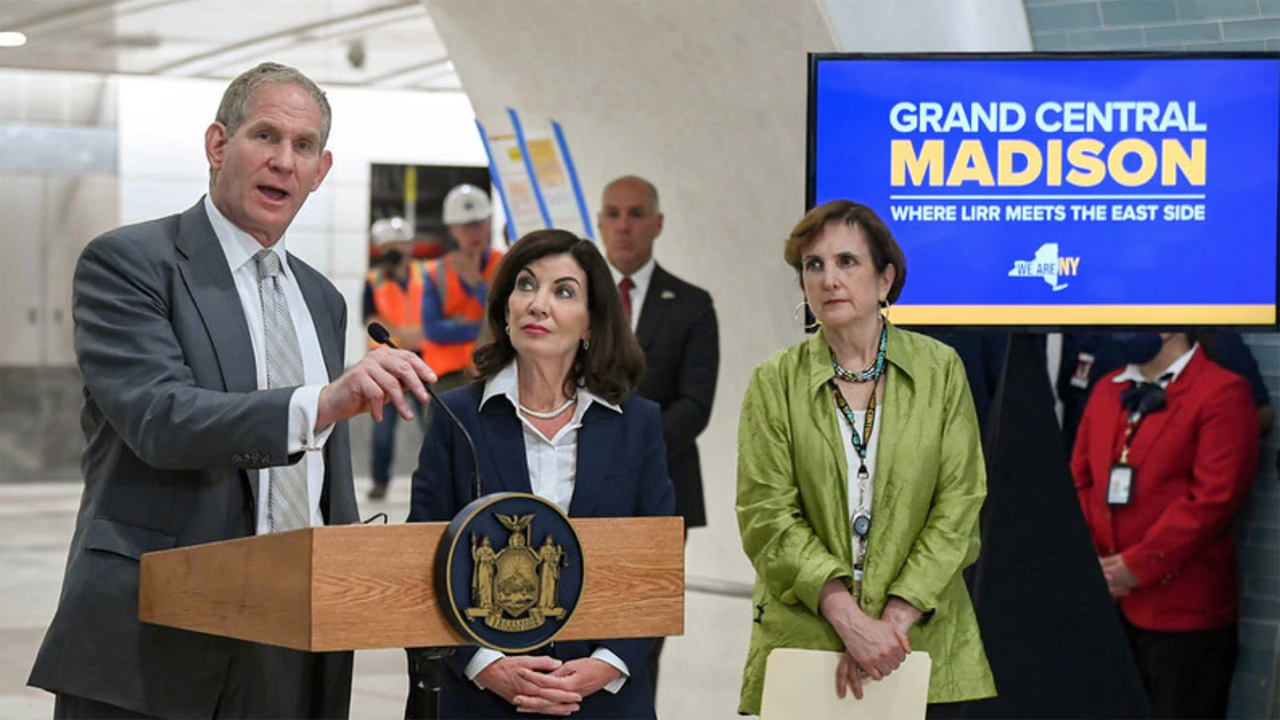 Construction of the East Side Access (ESA) project—originally conceived in the 1960s and developed in the 1990s—began in 2006 (see map below), and represents the largest expansion of LIRR service since the original Pennsylvania Station and its East River Tunnels opened Sept. 8, 1910. The project includes Grand Central Madison, located under Grand Central Terminal, which currently serves MTA Metro-North Railroad and MTA New York City Transit. The new connection will double LIRR’s capacity into Manhattan, with up to 24 trains per hour, and cut travel time for Queens, N.Y., riders by 40 minutes per day, according to New York MTA.

LIRR trains will enter Grand Central Terminal from a newly activated tunnel that carries two tracks as it passes under the East River at 63rd Street. The two tracks then fan out to four and then eight on Grand Central Madison’s two levels.

“All tracks and platforms are fully separated from Metro-North Railroad, ensuring that neither railroad causes delays to the other,” MTA said. “The terminal will feature real-time digital signage; robust cell service and Wi-Fi; 25 retail storefronts; four new entrances to the street level along Madison Avenue between 43rd Street and 48th Street; and two new entrances into the existing spaces of Grand Central and two to Grand Central’s north end passageways at 45th and 47th Streets.”

Crews from MTA Construction & Development, LIRR and contractors are currently testing systems—including signals, switches, electrical power, customer service data and HVAC—to ensure they work properly before service begins, according to MTA, and LIRR is instructing train operating crews about the layout and operations of the new terminal.

“The MTA has worked hard over the past four years—including throughout the pandemic—to hold to the 2022 opening date,” MTA Chair and CEO Janno Lieber said during the May 31 press conference. “We reimagined project management to ensure adjacent contracts were carefully coordinated to avoid delay-causing conflicts; simplified the change-order process; empowered project managers and transformed an insufficiently detailed schedule with only 8,500 activities into 40,000 distinct items and activities that could be tracked and completed.”

“This is an exciting, historic moment for New York state, Long Island, and the MTA as New Yorkers are just months away from being able to seamlessly ride a train between East Midtown and Long Island,” said Governor Hochul, who last visited the project in October 2021, when she and MTA officials took a test ride of a LIRR train into Grand Central Terminal. “Grand Central Madison—the largest new passenger rail terminal built since the 1950’s—will be a game-changer for Long Island, allowing the LIRR to dramatically expand service and operate more reliably for commuters, and reducing overcrowding at Penn Station. We will continue to build back stronger from the pandemic and deliver state-of-the-art, 21st century infrastructure worthy of New Yorkers.”

This month, LIRR is slated to release draft timetables for every LIRR branch showing proposed system-wide service following the Grand Central Madison’s opening. And next month, it will hold a series of virtual public information sessions to gather input on those timetables.

“Our service planners used the opportunity of the opening of service to Grand Central Madison to take a completely fresh look at the schedules, something that has not been done in more than 30 years,” LIRR interim President and Metro-North President Catherine Rinaldi said. “We want the public to be able to see these draft timetables months before service starts, and plan to share final timetables this fall.”