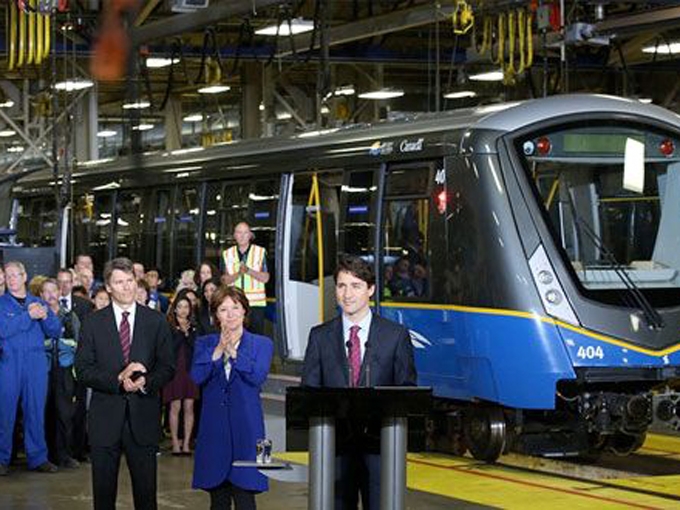 Canadian Prime Minister Justin Trudeau and British Columbia Premier Christy Clark say the agreement will result in more than C$900 million (U.S.$698 million) being invested by the Canadian government, British Columbia and municipalities in public transit projects across the province. The investment—C$460 million (U.S.$357 million) from the Canadian government’s new Public Transit Infrastructure Fund and C$308 million (U.S.$239 million) from British Columbia, “will help make sure that public transit is keeping pace with the rapid growth of British Columbia,” the government said. “Funding will modernize public transit systems, including the SkyTrain and SeaBus services, as well as the rapid transit and provincial bus systems, to help move people and commerce more efficiently through British Columbia municipalities. The agreement will reduce congestion and commute times, so that Canadian families can spend less time on the road and more time with their loved ones. The investments will be used to expand bus lanes, add new railcars to the SkyTrain and deliver the fixes that the transit systems have needed for decades.”

This funding is part of the first phase of Investing in Canada, the government’s C$120-billion (U.S.$93 billion) plan to support infrastructure across the country over the next 10 years. Under the agreement, funding has been made retroactive to April 1, 2016, “so projects can proceed without delay to help ensure a productive construction season this year.”

“Canadians have asked us to reduce congestion and commute times in their cities,” said Prime Minister Trudeau. “This investment in public transit will help the people of British Columbia get home to their loved ones faster. It will also help to grow the middle class by improving business flows in municipalities while reducing environmental damage.”