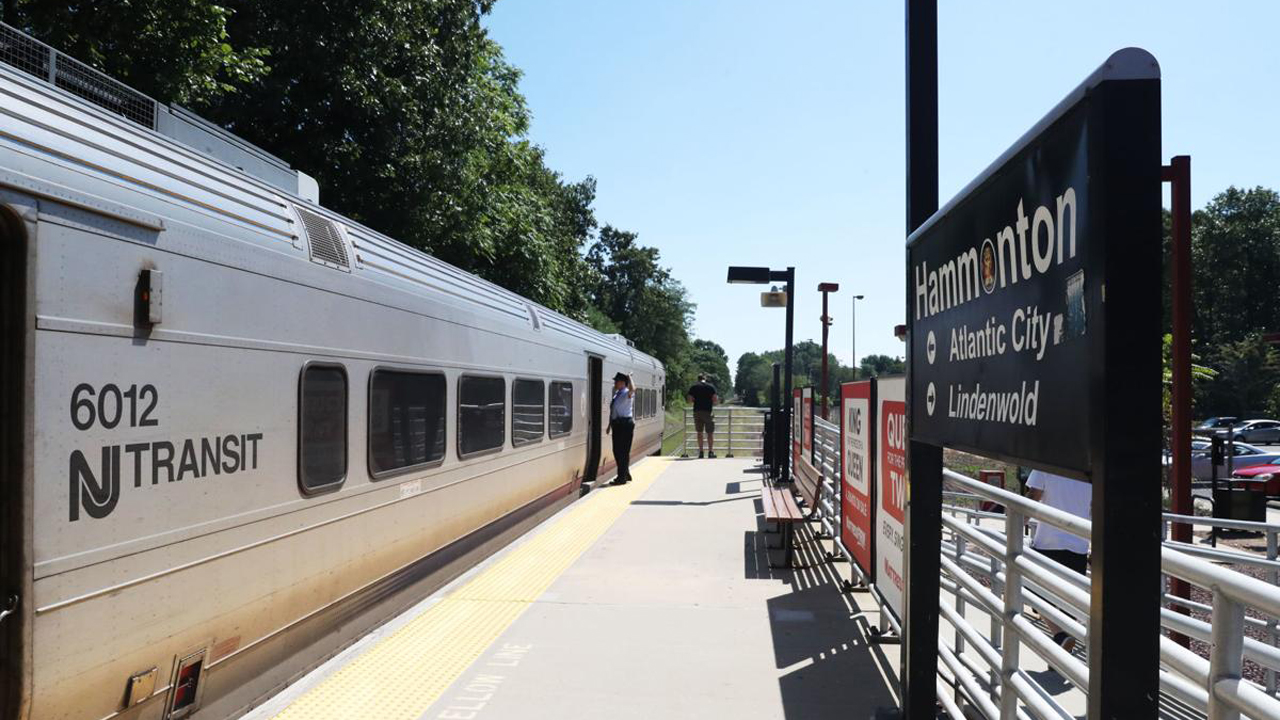 After an absence of more than eight months, trains are finally running again on New Jersey Transit's (NJT) Atlantic City Rail Line (ACRL) between that city and Philadelphia, and on the “Dinky” from Princeton Junction toward Princeton.

The trains began rolling again on Mother’s Day, Sunday, May 12. The agency had promised that service would return by May 24, the Friday before Memorial Day, and the date was later advanced by 12 days. Service cuts further north continue in effect, and there is still no precise and definite word on when those trains will be restored to the schedule.

NJT shut down the ACRL and Dinky after Labor Day last year as part of a program to facilitate the installation of Positive Train Control (PTC), although some local advocates and elected officials questioned whether a total shutdown was necessary. Other cuts to lines further north were implemented for the same reason. The Raritan Valley Line lost its “one-seat-ride” trains to New York Penn Station, and all trains on the line now originate or terminate at Newark. There are no weekend trains on the Gladstone Branch between that town and Summit on the Morris & Essex Line; instead there are substitute buses. Other trains on the Morris & Essex, Montclair-Boonton and other lines have been removed from the schedule. NJT management met the challenge of installing and testing enough PTC equipment to meet the deadline for progress required by the end of 2018, and those managers have been given high marks for meeting the interim deadline (the entire system must be in place by the end of 2020) because progress had been slow under the prior administration of Gov. Chris Christie. The current governor, Phil Murphy, had made PTC a top priority for NJT. 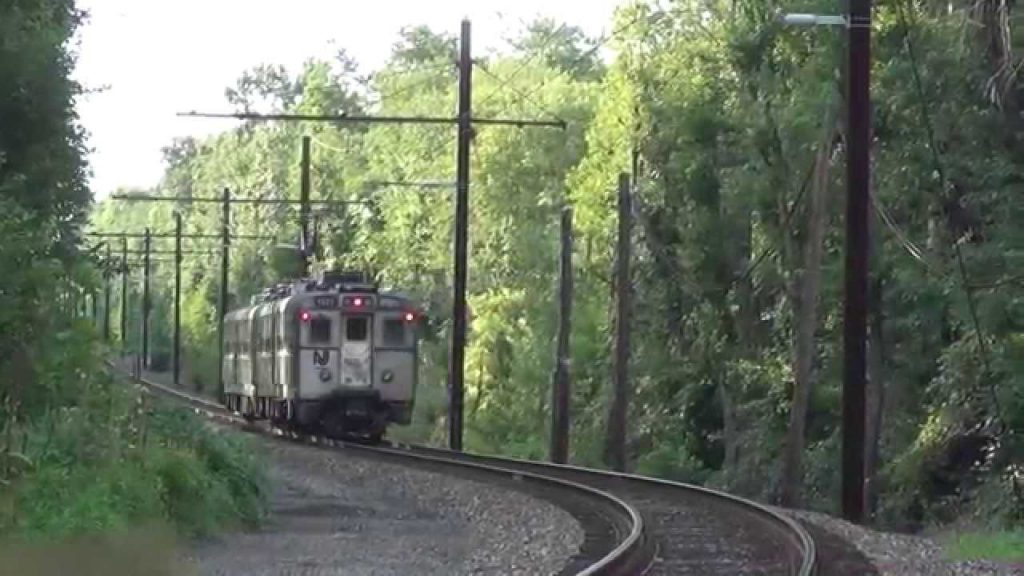 Advocates had hoped that, with NJT’s success in meeting last year’s PTC deadline, the lines and trains that had been eliminated would return to the schedule as 2019 began. That did not happen; nor did it happen on subsequent return dates proposed by the agency: the end of January and mid-March. On February 27, Murphy announced that the ACRL and the Dinky would be back on May 24. On April 17, he said that service on those two lines would return 12 days earlier.

Labor Day marks the end of the busy summer tourist season at the Jersey Shore, including Atlantic City. The trains were suspended after Labor Day last year, and there had been speculation that failing to restore the trains by Memorial Day (the start of the summer tourist season) could have had political repercussions. That consequence has been averted, but the question remains about why the ACRL trains were suspended for so long.

NJT Executive Director Kevin S. Corbett blamed the labor shortage at the agency, particularly the lack of engineers. He added that the first group of 12 new trainees had completed their classroom work and there are three more training classes in progress, so he hopes that the engineer shortage will be alleviated soon. In addition, he said that it required a great deal of effort to install PTC equipment on the GP40 locomotives, including taking an extra month to rebuild the floors and perform other repairs on some of the units, which were originally ordered by the Central Railroad of New Jersey in the 1960s and have been in service ever since.

During the service suspension, NJT ran buses to substitute for the trains that did not run. That was not difficult on the Dinky—a shuttle train on a branch line that runs for slightly more than two miles from the Northeast Corridor (NEC) at Princeton Junction, toward Princeton University. Princeton students gave the line its nickname many years ago, when it ran as far as downtown Princeton. It is “dinkier” today because it has been shortened twice over the years, so a single bus on a schedule comparable to the train schedule was sufficient.

The ACRL is longer and required more complex arrangements. Riders used the Port Authority Transit Company (PATCO) “Speed Line” (a metropolitan-style subway/elevated line) between Philadelphia and Lindenwold and scheduled NJT buses the rest of the way, or the scheduled NJT bus route between Philadelphia and Atlantic City. There was also a temporary bus route, the #340, which ran from Lindenwold and approximately conformed to the train schedule. This writer rode the final run of that route and was the only passenger on board.

The first train from Atlantic City to Philadelphia, which left at 4:43 a.m., did slightly better. There were three passengers, including this writer, at Atlantic City. A fourth boarded at Lindenwold. The first run went smoothly, as did the return trip, which left Philadelphia at 6:43 a.m. with 16 passengers, in addition to NJT employees, aboard. One of those employees was Corbett and another was Anthony Grieco, Assistant Executive Director for Communications and Customer Service.

Corbett spent much of the trip, as well as the next hour in Atlantic City, talking with the employees and passengers who rode on the train with him. He was clearly glad that service had come back and said: “We’re trying to make up for lost time.”

The new schedule for the ACRL is also controversial. When NJT first operated the line in 1989, there were two trains that arrived in Philadelphia during the morning commuter-peak. One was eliminated in a round of service cuts, but the new schedule restores the second “commuter” train. Service remains limited, though, and the last train now leaves Atlantic City every night at 10:44. That is not late enough for riders to attend a show or for evening-shift casino workers, who were among the intended beneficiaries of the original 1989 schedule. The last train left at 1:53 on Friday and Saturday nights and 12:53 on other nights under the schedule in effect last summer and, at one time, there was a train almost two hours later than that. Corbett said that ridership on the last train, including casino employees, was insufficient to justify running a train that late.

Two riders on first train from Philadelphia disputed Corbett’s assertion. Diana Crummie of Oaklyn and Rose DelVecchio of Colingswood, N.J., are casino employees, and they told this writer that many casino workers used the late train. Longtime advocate and South Jersey Transportation Advisory Committee member Jeffrey B. Marinoff also complained about the lack of late-evening service from Atlantic City, saying: “It’s a mistake to remove the last two trains at night.” He expressed concern for casino workers, tourists attending events in town and day-trip visitors, saying: “For those people, they can get to Atlantic City by train but can’t return home by train. That makes no sense. The bus is a very poor, slow, indirect substitute.”

Another rider on the first train, Ed Anderson of Stratford, N.J., also complained about the new schedule, but at the other end of the service day. He does construction work at a casino and said that the first train to Atlantic City does not arrive early enough for construction workers to get there in time to start their shifts.

Corbett said that, with the operating funds available, the agency had to optimize its schedule and could not please all riders. Like many transit providers, NJT is not doing well financially, especially on the operating side. Murphy has proposed a modest increase in the agency’s budget, but is also removing transfer payments from highway and environmental sources. The net increase will be less than 1%, which is not enough to provide any service improvements, except possibly to bring back more of the trains that were removed from the schedule last year.

The early-morning riders were glad to see the trains come back. Louise Jagod of Collingswood expressed sympathy for rail riders who were forced to take the bus for several months while the trains did not run and said: “The taxpayers of South Jersey want service.” She had been skeptical that the trains would return and added: “I wanted to see it with my own eyes.” Her sister, Mary Frances, who was riding with her, remembered the old Pennsylvania Reading Seashore Lines (PRSL), which ran limited service until the early 1980s and said she was “ecstatic” to see the trains return. Jacqueline Robinson of Lebanon, Pa., and Florence Walker of New Castle, Del., were traveling together and did not know that they were on the first train from Philadelphia. Walker said: “You don’t want to be crowded up on a bus”; a sentiment expressed by other riders glad to have the trains again. 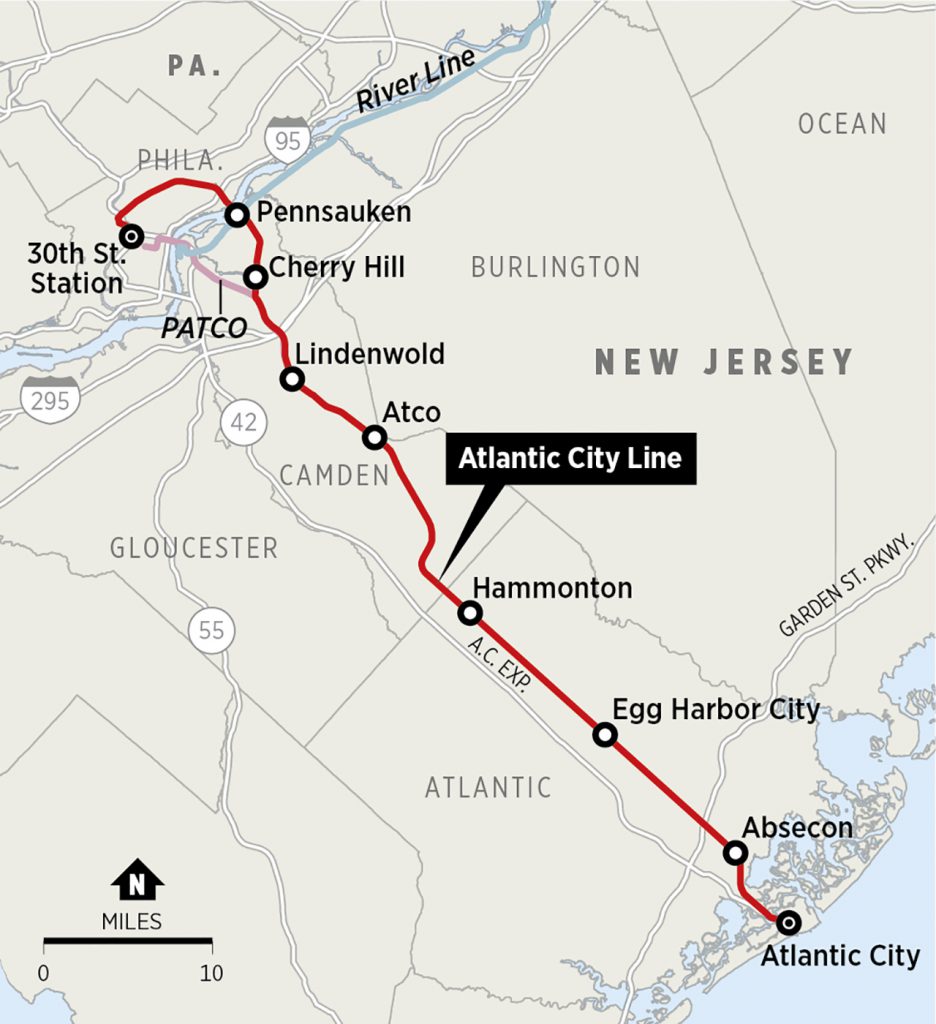 Marinoff had campaigned for the restoration of the ACRL itself in the 1980s and for the Pennsauken Transit Center, a transfer station on that line and the River Line, a light rail line between Trenton and Camden. On the first day of the restored service, he stated on his blog: “Where are all of the people who insisted that trains would NEVER return to the Atlantic City Rail Line? They must be back in NEVER, NEVER LAND with all of the people who insisted that I would NEVER get the funds needed to build the Pennsauken Transit Center” [emphasis in original]. Marinoff also told Railway Age that getting the AC trains back “didn’t just happen. We had to work awfully hard to get them back.” He added that getting trains back, especially in South Jersey, is “a tough sell.”

The trains are back, though, and rides and their advocates hope that the schedules will improve someday, somehow.

The Dinky returned to service later than the ACRL, because its weekend schedule does not start until 9 a.m. Ridership was light there, too, even during the early afternoon, when this writer was on board. Thirteen passengers (including this writer) rode from Princeton Junction toward Princeton University, and only three rode back to Princeton Junction. With better weather and no occasion like Mother’s Day to keep people busy with other plans, ridership should increase.

The weather provided an inauspicious backdrop for the trains’ return, as well as an unpleasant day for millions of mothers in the region on “their” day—it was a cold day with pouring rain, more like March than May.

As for the services that were eliminated in North Jersey and on the Raritan Line in Central Jersey, Corbett made no specific promises, but said those trains should start coming back in the fall. He said he expected that there will be more engineers working by then. There will also be some service reductions during the summer, as Amtrak continues its program of track work at New York Penn Station. He said: “We are starting to turn around.”

Riders throughout the Garden State hope he’s right. For several years, the general trend has been toward service reductions on NJT. Now, two lines that were eliminated for more than eight months have come back. The schedules are controversial, and funding remains problematic, but there now seems to be a glimmer of hope that some improvements may be coming to NJ Transit. What they will be and when they will actually occur remain anybody’s guess.