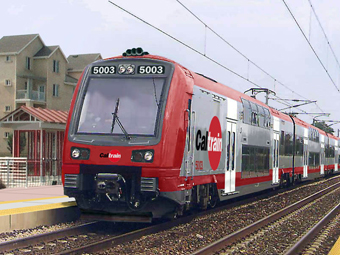 On Jan. 30, the California State Transportation Agency(CalSTA) announced that it will award $2.5 million to Caltrain from the new State Rail Assistance Grant (SRAG) program created by SB 1. Caltrain said it expects to receive close to another $4 million from this new program in 2019.

SRAG is just one of several programs expected to result in additional investment in the Caltrain system. Caltrain has also applied for $630 million from the state’s Transit and Intercity Rail Capital Program (TIRCP)* “to maximize the potential of the Caltrain Electrification project to expand capacity.” SB 1 also increases funding that Caltrain receives through CalSTA to support operating and capital needs. Caltrain is expected to receive an additional $5 million in CalSTA funds.

Of the $2.5 million in SRAG funds awarded, $500,000 will go to fund Caltrain’s Bike Parking Management Plan, $1 million will be used to maintain and rehabilitate the system’s railcars, and $1 million will add new crossovers near the corridor’s midpoint to enhance operational and schedule flexibility.

“If the TIRCP grant request is successful, the investment will maximize the benefits of the Caltrain Electrification project by expediting the full conversion of the Caltrain fleet to EMUs and will make Wi-Fi available to riders, a long-requested customer amenity that will also facilitate more efficient train operations and communications,” the agency said.

Current funding support for Caltrain Electrification “ensures that 75% of Caltrain’s fleet will consist of new high-performance electric trains when the service launches in 2022, but the remaining 25% would continue to be diesel trains,” the agency added. “If Caltrain’s full grant request is received, the investment would cover the cost of fully converting the system’s fleet to eight-car EMUs, an improvement that would increase seated capacity by at least 21%, depending on train configurations. It would also extend station platforms to accommodate the longer eight-car trains.”

The $1.9 billion CalMod project is funded through nine- and seven-party agreements that leverage local, regional and federal funding. It includes electrification and other projects that will upgrade service performance, efficiency, capacity, safety and reliability. “Electrification provides the foundation upon which future CalMod improvements will be based, including full conversion to EMUs, platform and station improvements, the extension of service to Downtown San Francisco and other projects that will allow Caltrain to grow and evolve with the Bay Area,” the agency said.

In related news, Caltrain has launched CalMod.org, a website dedicated to the Caltrain Electrification Project that “provides detailed construction information with interactive maps that will help residents understand when and where work will take place,” the agency said. “Visitors can view construction activities by city to track construction progress along the corridor. There are also city-specific fact sheets and documents, a listing of upcoming events, and a gallery of project photos, videos and renderings.”

Visitors to the site can also learn about the new Stadler EMUs that will replace Caltrain’s diesel-powered equipment.

CalSTA awarded $51.9 million in SRAG program funding to seven recipients. The funds are made possible by passage of SB 1.

* According to Caltrans, TIRCP was created by Senate Bill 862 (Chapter 36, Statutes of 2014) and modified by Senate Bill 9 (Chapter 710, Statutes of 2015) “to provide grants from the state’s Greenhouse Gas Reduction Fund to fund transformative capital improvements that will modernize California’s intercity, commuter and urban rail systems, and bus and ferry transit systems to reduce emissions of greenhouse gases by reducing congestion and vehicle-miles traveled throughout California. The goal of the TIRCP is to achieve reduce greenhouse gas emissions; expand and improve rail service to increase ridership; integrate the rail service of the state’s various rail operations, including integration with the high-speed rail system; and improve safety.”