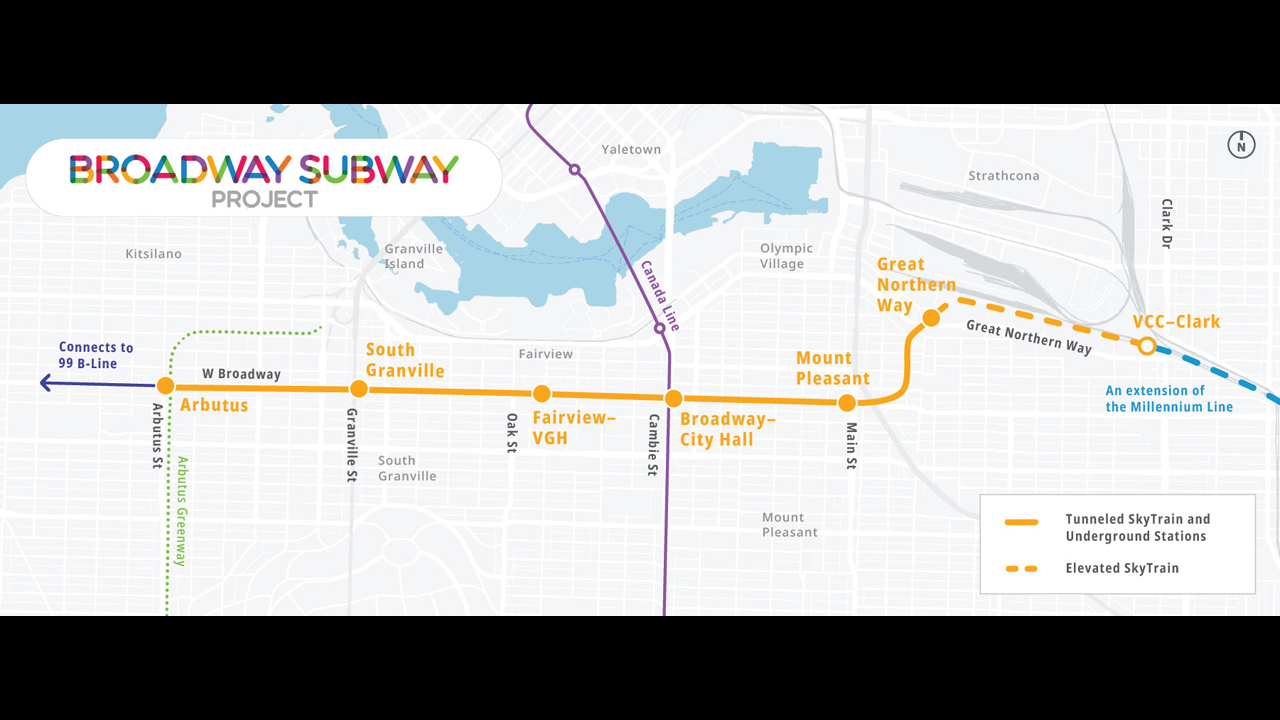 The Province of British Columbia has selected the ACCIONA-Ghella Joint Venture as its “preferred proponent team” to enter into final negotiations on a contract worth a purported C$2.83 billion for design and construction of the Broadway Subway Project, an extension of the Millennium Line and a key link in Metro Vancouver’s transportation system.

The Broadway Subway Project, 5.7 kilometres (3.5) miles in length, will run from the automated Millenium Line’s VCC-Clark Station to Broadway and Arbutus., providing “fast, frequent and convenient SkyTrain service to B.C.’s second-largest jobs center, health services and an emerging innovation and research hub, and growing residential communities,” the Province said in announcing this stage of the project.

Construction of the Broadway Subway Project is expected begin in 2020, with the new extension aiming to open in 2025. This will be the fifth extension of the driverless Skytrain metro system, which was inaugurated in 1986. Once in service, the journey time on the Millennium Line will take 11 minutes, saving passengers an average of 30 minutes a day.

The project, using a DBF (design-build-finance) approach, is funded and delivered by the Government of British Columbia, with contributions from the Government of Canada and the city of Vancouver. Transportation Investment Corporation (TI Corp) is leading project delivery on behalf of the Ministry of Transportation and Infrastructure and “will provide the controls, practices and other oversight that are essential for this complex project.”

The project, budgeted at C$2.83 billion, will be delivered under the Province’s Community Benefits Agreement (CBA), and as such “will increase training and apprenticeship opportunities and prioritize hiring locals, Indigenous peoples, women, people with disabilities and other traditionally under-represented groups, including youth, who want to build a career in the skilled trades,” the Province said. BC Infrastructure Benefits is responsible for implementing the CBA will be the employer for the majority of the skilled workforce.

ACCIONA-Ghella Joint Venture comprises ACCIONA (60%), and the Italian firm Ghella (40%), which has experience in underground works. Both global companies have previously collaborated to construct international transport infrastructure, such as Scandinavia’s longest railway tunnels for the Norwegian railway authorities (the Follo Line); the Legacy Way tunnels in Brisbane (Australia); and the Bologna Node on the Milan-Naples high-speed rail section in Italy. ACCIONA also has experience on its own of constructing metro lines in Spain, Ecuador and Brazil, as well as railway tunnels.