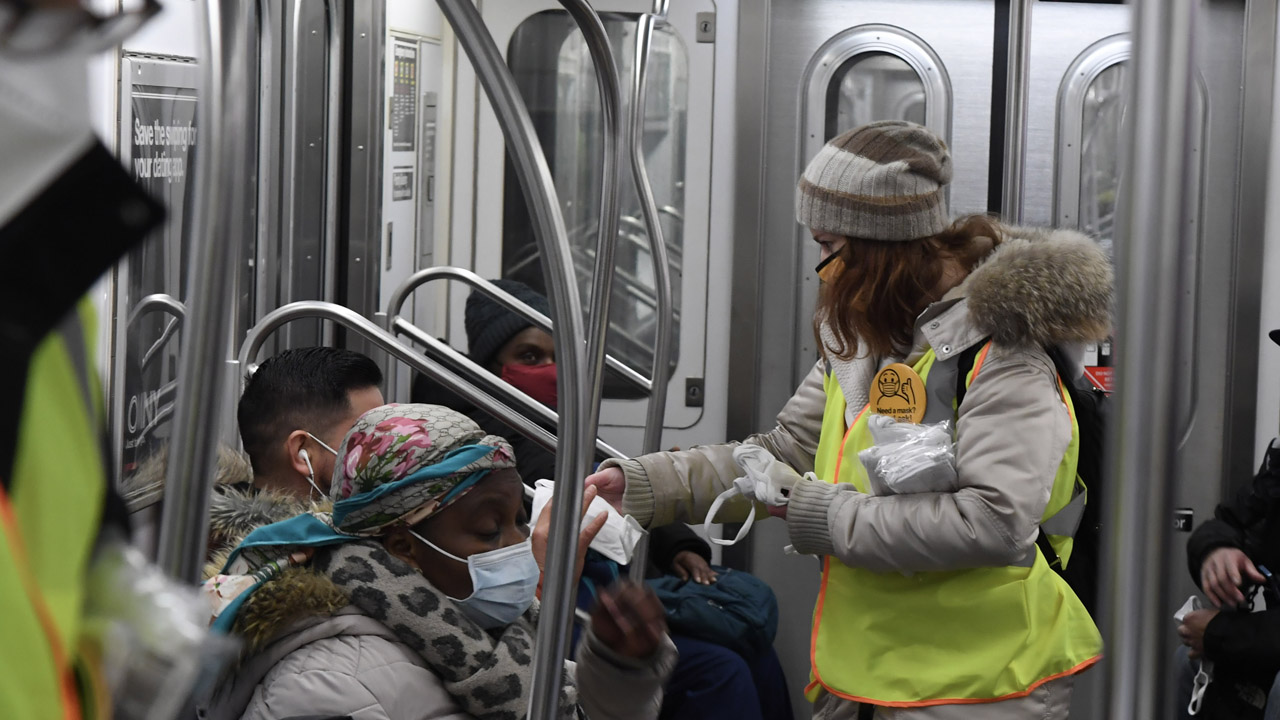 New York MTA staff participated this week in the Mask Force program—among the initiatives that public transportation agencies have undertaken to protect riders and employees during the pandemic. (Marc A. Hermann / MTA)

Public transit agencies are facing a projected shortfall of $39.3 billion through the end of 2023 due to the pandemic, according to findings from an independent economic analysis conducted by EBP US Inc. for the American Public Transportation Association (APTA).

While agency operations have received support, in part, from the CARES Act ($25 billion) and the recently enacted Coronavirus Response and Relief Supplemental Appropriations Act of 2021 ($14 billion), gaps exist due to ongoing losses of ridership, fare revenue, and state and local tax revenue. This translates to projected transit funding needs of $25.2 billion in 2021, $15.1 billion in 2022, and $13.0 billion in 2023, Boston-based EBP US found.

Following are highlights from its report, The Impact of the COVID-19 Pandemic on Public Transit Funding Needs in the U.S. (download below for complete results, sources and methodology):

• Public transit ridership dropped by nearly 80% in April 2020 and remained at more than 60% below 2019 levels through the end of December. Ridership is expected to remain at this level through third-quarter 2021 and “slowly grow” as the vaccine rollout continues. It’s anticipated that ridership in 2022 and 2023 will remain lower than 2019 levels “due to continued unemployment and increased remote work.”

• While most transit systems returned to fare collection by third-quarter 2020—after many halted it in March 2020—at least five large and small operators were still not doing so as of December 2020, according to EBP. Fare revenue losses have been amplified, the company noted, “because ridership declines for higher-fare rail services (including subway and commuter rail) have been about 1.3 times higher than ridership declines on lower-fare bus services.”

APTA said it is now urging Congressional leaders and President Biden to provide an additional $39.3 billion in COVID-19 emergency funding—up from a request of $32 billion in 2020—to avoid service cuts and employee layoffs and/or furloughs.

The association conducted two membership surveys this month (download below)—one of public transit agencies and the other of businesses—and the results support that need.

Of the 130 public transit agency survey respondents, which carry more than 75% of U.S. transit ridership, 22% have been forced to lay off staff; 28% have delayed, deferred or cancelled capital projects; and 38% are considering further service cuts given their current funding situation.

The business member survey—including 114 respondents representing a variety of sectors—found that 76% have seen a reduction in their transit industry business as a result of the pandemic, with an average 40% reduction in activity.

“The pandemic represents an existential threat to public transit jobs, businesses and service,” APTA President and CEO Paul P. Skoutelas said. “Our request for $39.3 billion is necessary to avoid catastrophic decisions that will hurt our riders, our communities, and the nation.”

Download the EBP US report, “The Impact of the COVID-19 Pandemic on Public Transit Funding Needs in the U.S”: