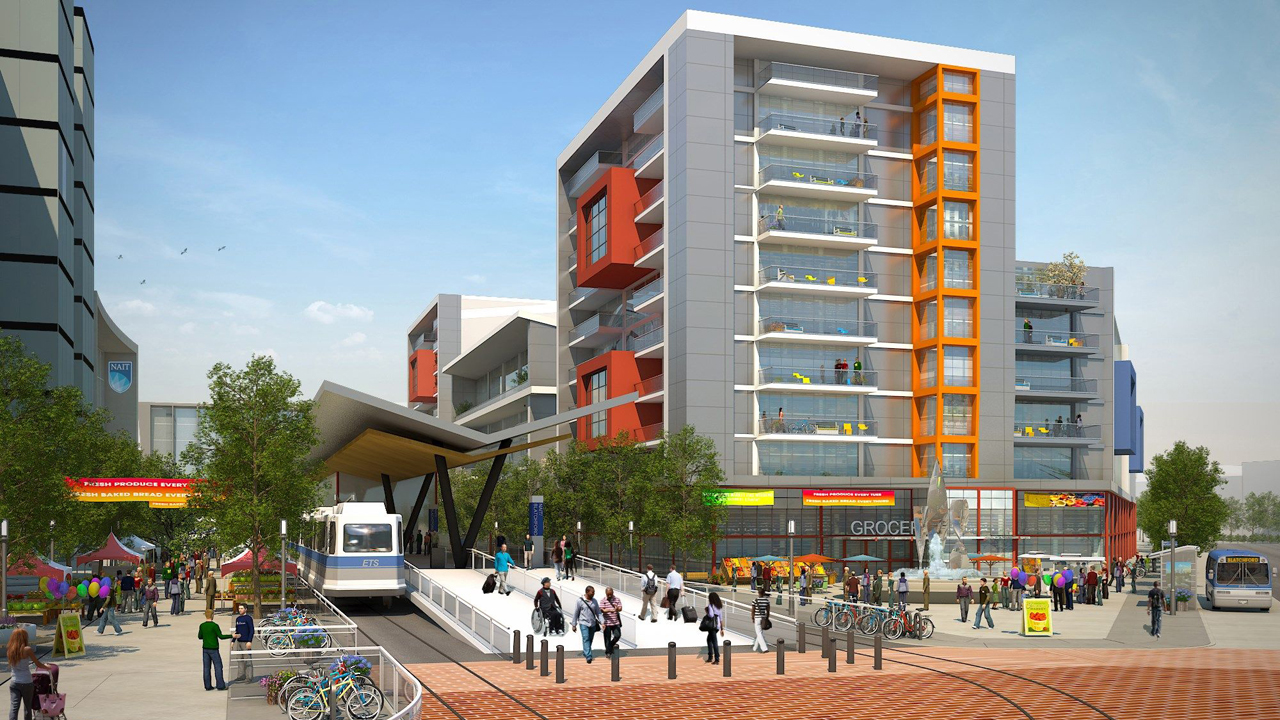 The Blatchford redevelopment on the site of a 217-hectare urban airport in Edmonton, Alberta is one of the largest sustainable developments in the world. The carbon-neutral, transit-oriented P3 development will be home to 30,000 future residents and connect to the city’s LRT system. Stantec photo.

RAILWAY AGE, JUNE 2019 ISSUE: Toronto’s unprecedented growth has spurred conversations on new ways to approach Transit-Oriented Development, with lessons for both Canada and the U.S.

The two previous articles in our series on TOD (Transit-Oriented Development, Railway Age, March 2019, p. 42; and April 2019, p. 25), looked at how New York got TOD right and how California is doing something different in TOD. Toronto has a history of trying to do the right thing in building transit-adjacent communities, but sustained growth has put the city at a crossroads when it comes to development and transit planning.

In March 2013, Toronto got a big ego boost. The city had surpassed Chicago to be the fourth-largest city in North America by population, after Mexico City, New York and Los Angeles. At least that’s when local media seized on estimated census data to set the city abuzz.

While estimates and rankings only tell one part of a city’s story, one fact is clear: Toronto has been growing quickly. The Greater Toronto Area (GTA) is now home to more than 6.5 million people, according to 2016 data. Growth in the area has led to skyrocketing real estate prices in both the downtown and the suburbs, and put a strain on the city’s transit system.

Toronto has four subway lines with 75 stations and 7 regional rail lines with 67 stations, and is well-positioned to surpass Chicago, its Great Lakes counterpart (with eight lines and 145 stations), as it enters the next stage of development.

The GTA is investing in an additional 22 new stations and further LRT and GO Transit Expansion developments. The new Ontarion provincial government recently announced a C$28.5 billion transit plan for the region. This is welcome news for the city’s 2.7 million daily transit riders and commuters within the GTA. But in a city on a path for serious growth, nothing will feel different until much-needed transit and housing are built.

Toronto does have a history of high-density development in areas of transit, an earlier iteration of what is now labelled TOD. Looking at the city, dense pockets can be observed at arterial junctions along the original Yonge subway line from Eglinton Avenue to downtown. This was done quite intentionally, with zoning for increased density near that transit line.

While many North American downtowns are served by several highways, Toronto has only two—the Gardiner Expressway and the Don Valley Parkway. Personal automobiles are limited to two or three lanes of traffic each way to reach the downtown core, with transit serving most commuters. That means the Toronto Transit Commission (TTC) and regional rail (GO Transit) need to do much of the serious heavy lifting when it comes to moving people—and ridership is on the rise.

TOD as a tool to address growth

Ask anyone in Toronto about the biggest challenge facing the city, and you’re likely to hear one of two answers: housing and transportation. The city needs more housing of all kinds to support its growing workforce and temper ballooning real estate prices that have nearly doubled on average in the past 10 years. Capacity needs to be added to existing transit lines to meet increased ridership, and new lines are needed to make the connection across the GTA.

Making those connections continues to encourage TOD, and Metrolinx, the regional transit planning agency, has actively engaged stakeholders to overlay the regional rail network onto city transit and other regional transit agency services. Metrolinx has been working for several years to enhance GO services to create an all-day, 15-minute-headway, two-way commuter system with additional services at peak times on many parts of its network. The agency has worked closely with the city to deliver a plan called SmartTrack (an election platform of Mayor John Tory), which will improve and adapt commuter rail corridors for urban transit use. This will help create new opportunities for TOD and new connections that didn’t exist before, with more intersections, and more access to other rail lines and to the larger network.

Couple that with Toronto’s young educated workforce interested in communities with alternative modes of transit, and there is an enormous potential for TOD developments. With good planning, new developments can tap into the millennial desire for vibrant communities and alternative modes of transit, becoming localized multimodal hubs highly attractive for business and retail investment.

On the developer side, there is increased interest in meeting this market, not only in the downtown core, but in outer urban and suburban communities with the potential for densification and connection to a larger network. Giving up a life beholden to the automobile is not just something for downtown dwellers. Residents in well-connected outlying neighborhoods and cities of the GTA could, in the future, get where they need to go without a private car. This idea is also gaining traction in other Ontario cities with their own transit expansion plans, such as London, Waterloo and Ottawa.

TOD has been considered as a solution for many years, but the difference now is that it’s seen as a win-win solution for both the public and private sector. This is accelerating discussions, proposals and ideas to improve future urban communities.

Actively looking at a new approach to TOD

When it comes to involving the private sector in capital projects, Canada has a more mature process than the United States. Governments across the country have a good track record of engaging public private partnerships (P3s) for large-scale, single-use projects such as roads, hospitals and schools. Now that the industry has seen the potential of P3s, it’s looking at ways to partner on transit projects.

This is manifesting itself within the TOD market, where developers are more comfortable with the idea of building on public land, and with approaching government agencies with ideas for development. Transit corridor studies are something developers watch carefully, and government agencies have been increasingly willing to listen to
their proposals.

These conversations being led by the private sector represent a more-integrated, cooperative approach that has the potential to allow for improvements in communities, to the mutual benefit of more parties than ever before.

Those benefits include offsetting capital investment costs while creating better communities and increasing transit ridership. Metrolinx and TTC leadership have put TOD high on the agenda to align land use planning more effectively than has been done previously.

The idea of pioneering new forms of TOD agreements is gaining momentum in Ontario. Another government agency, Infrastructure Ontario, has a mandate to support project management and to get infrastructure built. The agency also has extensive P3 experience and can assist with these project frameworks.

Many U.S. jurisdictions are still developing an approach to private investment and use of P3s, but strides are being made in this direction. Some U.S. agencies are actively watching what is happening in Ontario, with open lines of communication with their counterparts north of the border.

The P3 experience in Canada may not be as extensive as in Europe, but it provides an interesting case study for American jurisdictions—and one that’s closer to home geographically, politically and culturally. There is still plenty to learn on both sides of the border as our cities grow and our transportation systems change with increased transit investment and the adoption of new mobility options.

In the end, increased collaboration and greater integration of public and private investment will result in the progressive development of more connected communities with better design for people to live, work and play.

James Purkis is Stantec’s Rail and Transit Leader. He has more than 30 years’ experience across the globe in transit and transportation systems. Tom Kyle is a Principal in Stantec’s Toronto office, and a trained architect with a focus on transit, civic and education facilities. Founded in Canada in 1954, Stantec is a global design and engineering firm specializing in buildings, interiors, power, environmental, water and many other disciplines. See www.stantec.com. 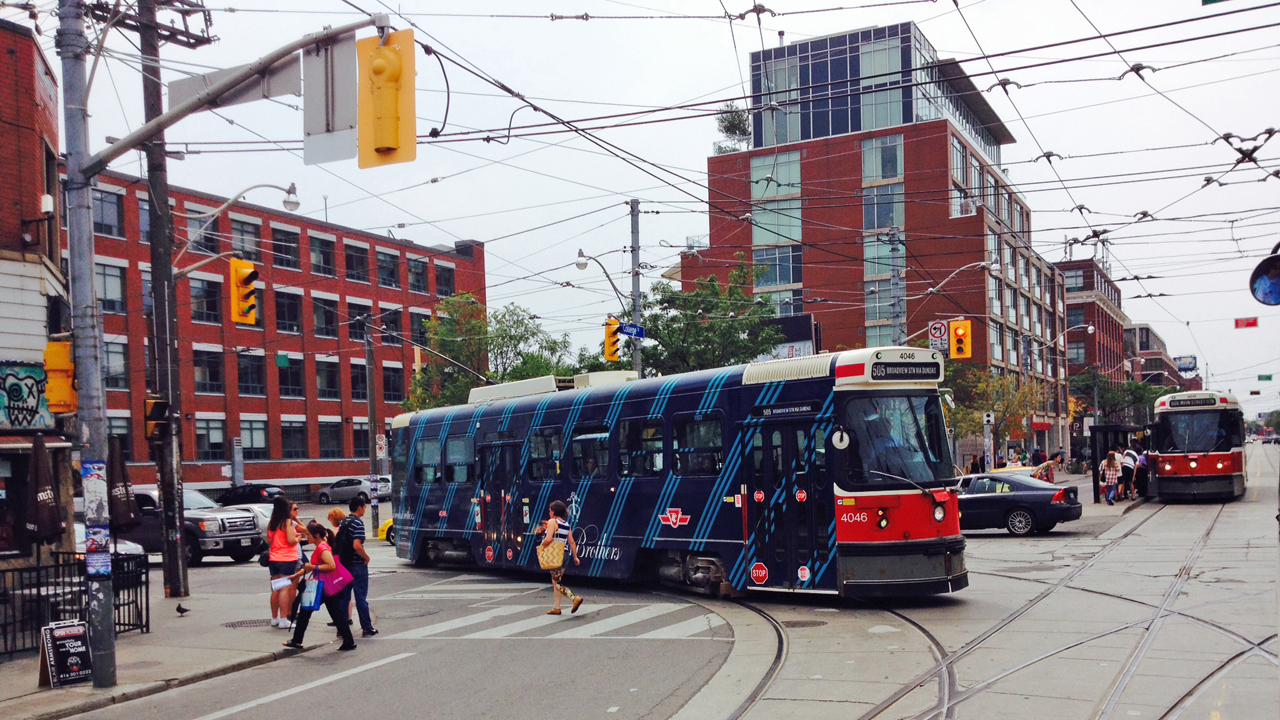