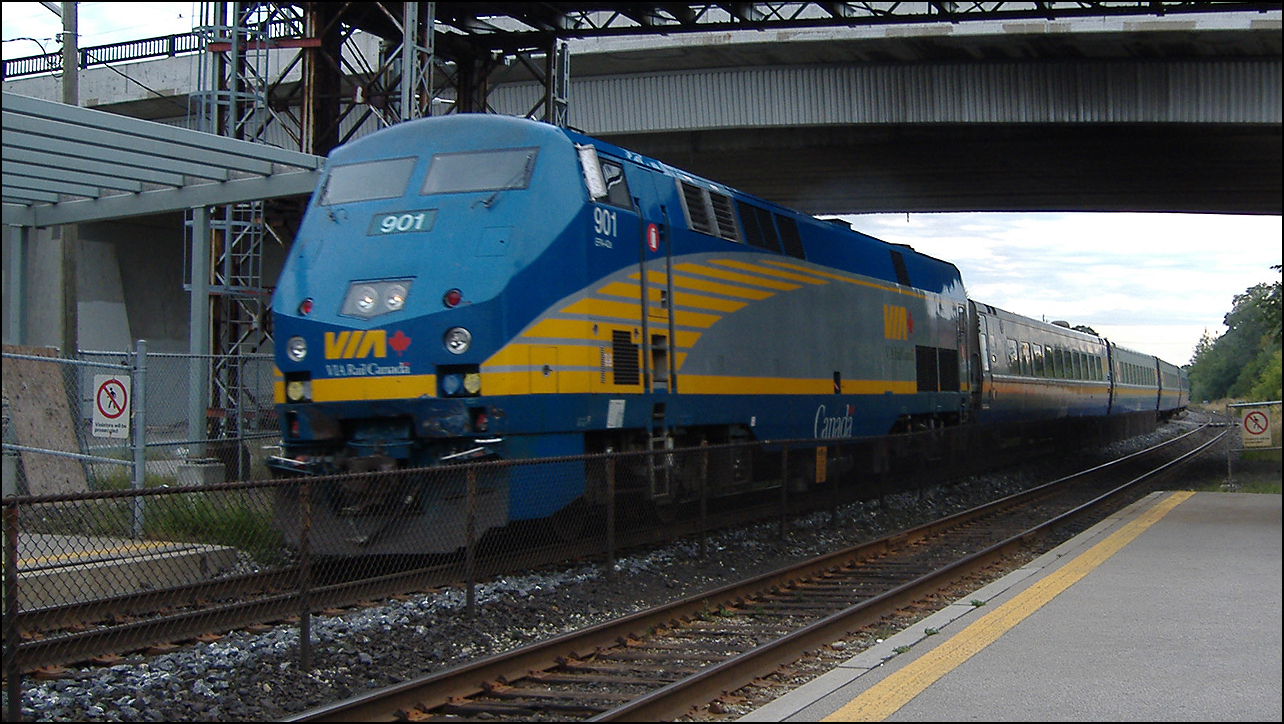 VIA Rail Train 66 leaving Toronto on its way to Montreal along the Quebec City–Windsor Corridor. The LRC cars date to the 1980s. Photo: Andrew Dolch via Wikipedia

Canada’s federal government will help fund replacement of VIA Rail locomotives and rolling stock on the country’s most heavily-traveled passenger rail corridor.

Separately, Transport Canada will also kick in seed money for planning of high-frequency operations in the Quebec City-Toronto Corridor.

Minister of Transport Marc Garneau on Monday announced that Ottawa will provide funding for VIA Rail to replace its fleet in the Quebec City-Windsor Corridor, which accounts for 94% of the operator’s ridership, with 32 new, bi-directional trains.

“As it is reaching the end of its useful life, the fleet in this corridor must be replaced to help maintain passenger safety for the next 30 years,” TC said.

The new fleet will be more fuel efficient, reducing harmful emissions by as much as 85%. Other benefits include visual communication media for hearing-impaired passengers; purpose-built accessible washrooms; on-board wheelchair lift, and a minimum of three wheelchair tie-downs per train, with two in the same car, an increase from the current one tie-down per train.

The new fleet will increase VIA Rail’s operational flexibility and reliability by reducing mechanical breakdowns that effect on-time-performance. VIA Rail will soon launch a request for qualifications followed by a request for proposals.

Ottawa’s Budget 2018 also proposes $8 million for Transport Canada to undertake foundational work to advance VIA Rail’s proposal for high frequency rail in the Quebec City-Toronto Corridor. The work would support further economic analysis of key issues, such as revenue and ridership projections, as well as estimates for capital and operating costs. This funding will also go towards exploring opportunities to leverage private investment or a potential role for the Canada Infrastructure Bank, and open and transparent engagement with potentially affected communities, including Indigenous peoples.

“VIA Rail has been connecting Canadians together for decades and plays an important role in the lives of Canadians who rely on the train for their transportation needs,” said Garneau. “We are proud of investing in this new fleet to make travel more accessible and efficient for all Canadians, support economic growth and job creation and promote a sustainable environment for generations to come.”

“We thank the Government of Canada for their trust in VIA Rail and for this historic investment. It will allow us to significantly improve our intercity rail service,” said Yves Desjardins-Siciliano

President and Chief Executive, VIA Rail Canada. “It will also ensure Canadians continue to have uninterrupted access to the Quebec City-Windsor corridor on a sustained long-term basis. This important milestone moves us forward with VIA Rail’s transformation plan.”