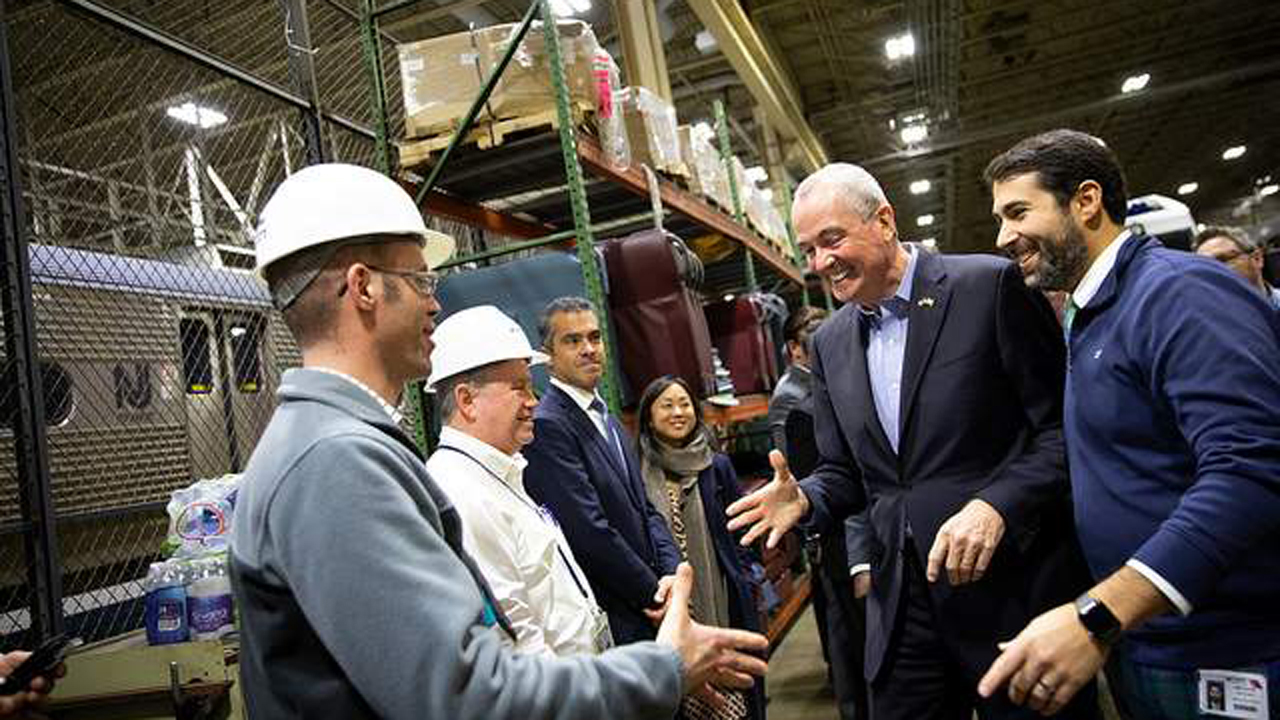 Like many New Jerseyans, I was surprised to wake up on Nov. 3 and learn that the race for Governor was too close to call. That seemed unthinkable at the time, as Gov. Phil Murphy (pictured) had an 11-point lead in the polls over Republican challenger Jack Ciatterelli, only about a week earlier. By the time the mail-in ballots were counted, Murphy was ahead by about 65,000 votes, a lead of approximately 2.6%. Republicans made gains in both houses of the state legislature, but Democrats still hold solid majorities.

The election of 2020 was one of the most dramatic in recent times. That included the transit scene, where Bay Area voters agreed to chip in to keep Caltrain going and Austinites voted to expand their rail transit. But voters in Portland, Ore., voted down a tax on employers that would have financed a new light rail line, and Gwinnett County residents in the Atlanta suburbs voted again to keep a MARTA rail line out of their county.

Nothing so dramatic happened on the main line passenger rail scene this year, but a swing toward the Republicans in Virginia and an amazing upset in New Jersey could foreshadow some changes in policy that could affect new rail projects in those states and, perhaps, elsewhere in the nation.

In Maine, voters approved $100 million in bonds for transportation projects, including $85 million for highways. The other $15 million will go toward everything else, including ports and marine transportation, aviation, transit (all provided by buses) and “freight and passenger railroads.” How much the existing Downeaster service or new rail lines proposed by local advocates such as the Maine Rail Group and Train Riders Northeast will get is questionable, but it won’t be much.

The changes stemming from the vote in Virginia and New Jersey may be significant, but it will be some time before it’s known what sort of results those changes will bring. One thing we know is that the latest returns have Democrats worried, at least for now.

The other place where voters chose a new leader is New York City, where Democrat Eric Adams won with nearly 73% of the vote. Once he takes office in the New Year, we will see what sort of rapport he develops with the state’s new governor, Kathy Hochul, also a Democrat. It is difficult to fathom that it could be as bad as the one between outgoing Mayor Bill de Blasio and former Gov. Andrew Cuomo, who was effectively forced to resign last August. Although they were both Democrats, they squabbled frequently, including over issues related to transit in New York City.

Virginia’s recent trend toward the Democrats has stopped, and the Old Dominion is back in the “purple” category. Political newcomer Glenn Youngkin, a Republican, defeated former Gov. Terry McAuliffe, who was trying for a comeback, by slightly more than 2% of the vote. The governor of Virginia can’t be re-elected, and McAuliffe held the post from 2014 through 2018. Republican candidates for Lieutenant Governor (elected separately) and Attorney General also won, and the GOP took a narrow lead in the House of Delegates. The state Senate was not up for re-election, so Democrats will hold onto their two-seat lead there.

Many commentators have called the Republican victories in Virginia a bellwether that should worry Democrats as they face the election next year. It seems reasonable to expect that the fortunes of President Biden and many other Democrats depend on how well the country has recovered from the COVID-19 virus and the economic downturn that the virus brought, with its adverse impact on millions of Americans.

It is also unclear whether local forces had more to do with the Republican victory in Virginia than whatever national disenchantment with the Democrats exists at the moment. The party out of power in Washington often wins the Virginia governorship, and that happened this time around. Outgoing Gov. Ralph Northam, along with the Lieutenant Governor and the Attorney General, had all gotten into trouble during the terms now ending. Though none were forced from office, those difficulties could not have been good for the party in the voters’ minds.

There are plans for more passenger trains in the state, both on Amtrak and on Virginia Railway Express (VRE) in the suburbs near Washington, D.C. Would the Youngkin Administration scuttle those plans made by the Northam Administration? Maybe, because the primary beneficiaries are the aforementioned suburbs, and cities like Norfolk and Richmond, where Democrats are strong. Still, the deal to buy rights-of-way from CSX and Norfolk Southern to host passenger trains benefits both private-sector entities, and some people who live in Republican areas. So, the new Republican leaders in Richmond might be willing to allow the proposed passenger rail expansion, although they can be expected to leave their mark on the final version. Like everything else concerning rail these days, time will tell.

Like many New Jerseyans, I was surprised to wake up on Nov. 3 (the morning after) and learn from a report on NPR that the race for Governor was too close to call. That seemed unthinkable at the time, as Gov. Phil Murphy had an 11-point lead in the polls over Republican challenger Jack Ciatterelli, only about a week earlier. By the time the mail-in ballots were counted, Murphy was ahead by about 65,000 votes, a lead of approximately 2.6%. Republicans made gains in both houses of the state legislature, but Democrats still hold solid majorities.

While Murphy’s narrow victory has puzzled many political observers in the state, if it weren’t for the outcome of a local race in South Jersey, there would be no reason to expect much to change.

That race took place in the Third Legislative District, south of Camden and along the Delaware River and further east. Many Garden Staters are still reeling from the defeat of Senate President Stephen Sweeney. Sweeney is a conservative Democrat whose legislative position was considered unassailable. He was regarded by many as the Democrats’ most-likely candidate to succeed Murphy in 2025.

It did not turn out that way. Edward Durr, a truck driver who ran an ultra-low-budget campaign against Sweeney, knocked him out with a lead of about 2.3% of the vote. Sweeney’s running-mates in the Assembly went down, too.

Sweeney was the political head of the Democratic machine in the state. He has been compared to Lyndon Johnson for his ability to twist arms and shape the legislative agenda in the Senate. Now he has been forced out, and at this writing, Senate Democrats are deciding who will replace him. The party machine also has a component in North Jersey, and with Sweeney out, it will come into prominence.

In the short run, Murphy will probably benefit the most from Sweeney’s sudden departure. Sweeney had slowed or prevented Murphy from carrying out the more-progressive part of his agenda, and he can no longer do that, at least not after he leaves office in January. In the longer run, it’s hard to say. Murphy is on a two-term limit, and he has just been re-elected. Meanwhile, Senate Republicans feel emboldened, and the party’s leadership in the Senate just took a hard turn to the right.

So how will Sweeney’s departure affect New Jersey Transit? In the short run, at least, probably not much. Despite the agency’s “official” status as a quasi-independent corporation and not a direct component of state government, every governor has run it as if it were a state agency under his or her direct control. Murphy is no exception.

Will Murphy have to weaken his grip on NJT, at least to some extent? It’s hard to say. On the operating side, NJT is bringing previously discontinued trains back to the schedule, so he will probably not get much flack on that account. On the capital side, he is pushing the Gateway Program projects, notably the Portal North bridge at the moment. New Republican leaders are more hawkish on budget issues than the Democrats who preceded them, so they may question Murphy more-strongly about the cost-effectiveness of NJT’s projects. Legislators may also want more of the state’s transit grants to be spent on local projects concerning their home districts, rather than on mega-projects like Portal North.

There is another wild card in the deck. Many “progressive” voters dislike Sweeney. He came from labor, a union representing workers in the private sector. He did not have a similar positive attitude toward unions in the public sector, and one such union fought against him. The New Jersey Education Association, which represents teachers, once campaigned against him. He weathered that campaign, even though he could not defeat Edward Durr’s low-budget campaign against him.

The Progressives consider Sweeney to be “undemocratic,” but they also don’t like seeing a Republican in his old seat. Will Sweeney’s departure mobilize them and give them enough clout that Murphy starts negotiating with them in a meaningful way?

Political developments occur in Washington, D.C., as well as in capitals like Richmond and Trenton. The political situation is unsettled in many places these days. It will be difficult for the Democrats to improve their position next year, but it will not be impossible.

Can the Democrats work well enough with the newly-emboldened Republicans to get things done, including more trains and better transit at the state and local levels? President Biden got his party to pass an infrastructure bill, and his “human infrastructure” bill is still in play, so his Administration will be in a better position to win back their base. The infrastructure bill’s passage is good news for Democrats, but it did not come in time to help with the recent election.

Maybe, if the Democrats can somehow manage to get some new trains and rail transit started, they and some Republicans could support it jointly, and may even ride it together. It may be a dream on my part, but genuine cooperation between Democrats and Republicans is more likely to start on the train or the streetcar than just about anywhere else.

Then for the first time in decades, the American people may also to have reason to feel like winners, along with the candidates they help elect.