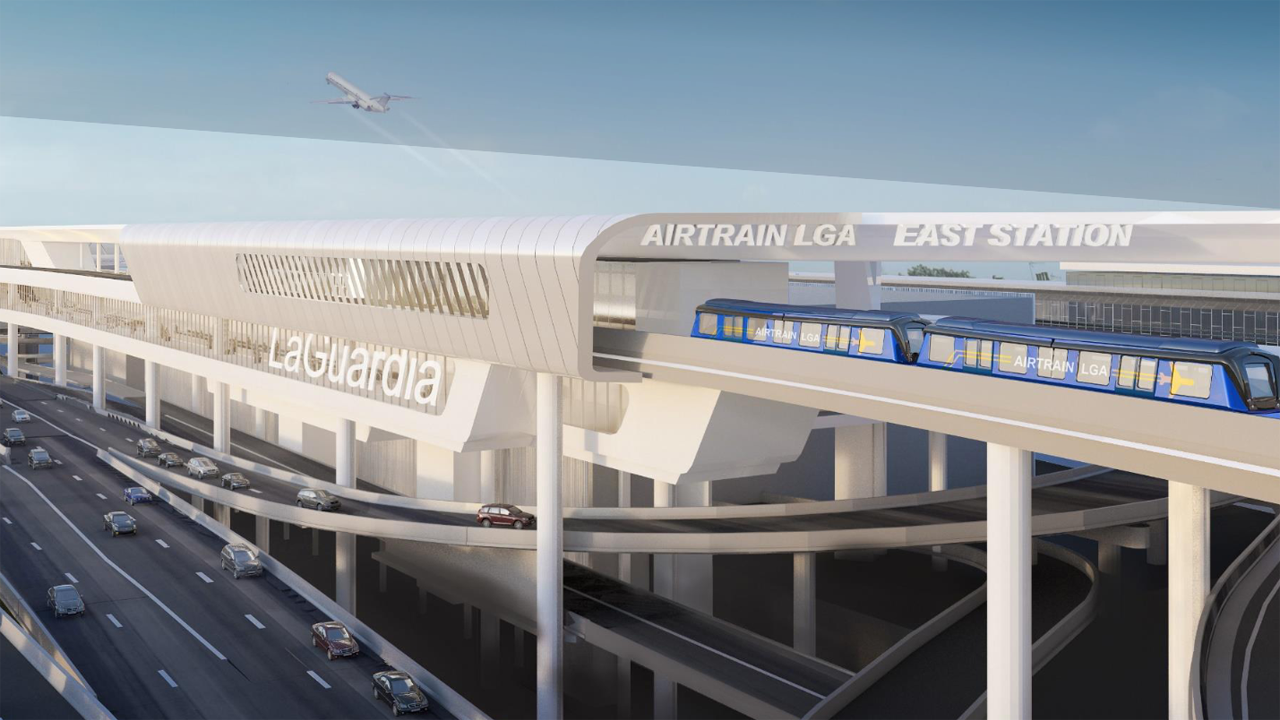 Hochul backed off from Cuomo’s proposal, and now it’s at least part-way back to the drawing board. The PANYNJ has some ideas to share and will do so at two public events later in March: at the LaGuardia Marriott Hotel in East Elmhurst on March 16, and on March 24, at the Astoria World Manor, both at 6 p.m. It appears at least some ideas that come from “outsiders” might be worth considering, also, even if they are not presented at the upcoming sessions.

The Associated Press reported March 2 that the PANYNJ has released a number of new options, in light of Hochul’s decision to place a 1.5-mile, $2 billion project to build the rail link in eastern Queens on hold. There was strong neighborhood opposition to the project, even though the Federal Aviation Administration (FAA) had approved it. The plan also drew fire from local officials, as well as a lawsuit that alleged that the FAA did not review other options appropriately.

The proposal that Cuomo favored called for a separate rail link to the airport form the Willets Point station (located near the stadium where the Mets play), which is served by the Long Island Rail Road and New York City Transit’s No. 7 Flushing Line. The proposed LGA AirTrain would have been a separate segment of a two-seat ride, like AirTrain Newark (the Newark Airport Monorail that connects with NJ Transit and Amtrak on the Northeast Corridor) or the JFK AirTrain that connects with the NYCT A Train at Howard Beach and several NYCT lines and the LIRR at Jamaica. Connecting trains on the No. 7 or the LIRR would proceed east from Manhattan; the proposed link would have taken a northwesterly path from Willets Point, prompting those opposing the project to say that it was “going backwards.”

The PANYNJ has proposed 13 alternatives: five bus options, seven rail options, and one ferry/bus option. Of the five bus options, three would entail dedicated bus lanes, while the others would use the existing M60 (from 125th Street, Manhattan) or Q70 (from Jackson Heights, Queens) routes. The ferry/bus option would use a boat that would leave Pier 11 in Lower Manhattan and proceed up the East River to northern Queens and connect with airport shuttle buses. Five of the rail options would involve building a new light rail line, a mode that has been proposed for the city, but there are currently no such lines operating there. They would connect from the No. 7 at Woodside (where the LIRR Port Washington Branch also goes), Mets-Willits Point (the same transfer point that would have been used under the former proposal that Cuomo supported), Jamaica (also a major transfer point for the LIRR), Astoria Boulevard Station (on the Astoria Line), and 74th-Roosevelt Avenue in Jackson Heights (where the No. 7 connects with NYCT’s E,F,M and R lines). The other two proposals call for extending existing subway lines: the N Train from 30th Avenue Station on the Astoria Line or the N and W lines from Ditmars Boulevard Station, at the current end of that line. Both of these proposed extensions would be elevated for part of the route and run below grade elsewhere.

The PANYNJ promotes the airport with a campaign called ”A Whole New LGA.” While it still appears to be pushing the former plan that Cuomo favored, a March 1 post contains maps for each of the 13 proposals under consideration by the agency. Apparently, the bus, rail and ferry options are not the only ones on the table. The last panel of the post bears the words: “This study also includes an evaluation of innovative and emerging technologies that could be applicable, such as narrow tunnels with electric vehicles; fixed guideway with group rapid transit (autonomous shuttles or buses), and personal rapid transit (individual or small group pod systems)” without consideration of how any of those options could be implemented, especially in the near future.

While the PANYNJ owns the three major airports in the vicinity (LGA, JFK and Newark), it has often drawn criticism from rider-advocates as an intractable bureaucracy that listens only to its two bosses: Hochul and Gov. Phil Murphy of New Jersey, and does a poor job of running the PATH trains between Manhattan and nearby New Jersey. Longtime planner and advocate George Haikalis went further. He alluded to the “balance of nature” and said, “Some planners like to build rail lines where they can, but the Port Authority seems to have the largest collection of rail-haters of any agency in this country.” One of the issues that critics stress is the high fares that transit riders pay to get to the airport.

To get to the airport, the Port Authority charges $10.75 for subway riders to use the use the JFK AirTrain: $8.00 for the AirTrain, in addition to the $2.75 base fare for the subway. There is no charge for riders who enter at places other than the transfer points of Howard Beach and Jamaica. AirTrain Newark, the Newark Liberty International Airport monorail, has the same fare structure: no charge except at the monorail’s Rail Link station, the transfer point for NJ Transit or Amtrak trains on the NEC)or NJ Transit’s North Jersey Coast Line. The fare is $8.00, in addition to the base fare on NJ Transit, which comes out to $11.00 from Newark or $15.50 from New York. Local transit fares are also subject to “senior” or “disabled rider” discounts, but the AirTrain surcharge for either airport link is not.

Commentators are already weighing in on the Port Authority’s proposals. Dave Colon blasted the agency’s stated alternatives in a post headlined Behold! Your New LaGuardia Airport Transit Options (including one old one) on Streetsblog NYC. Colon used the word “alarmingly” to describe the inclusion of the “other emerging technologies” and said: “The Port Authority maps are just lines on the ground—the agency didn’t reveal much about frequency of service, cost to build and maintain, or ridership projections—and even included its much-reviled ‘Wrong Way AirTrain’ route between LaGuardia and the Willets Point/Citi Field 7 and LIRR station as one of the five potential light rail links … Once seen as both cost-prohibitive and not worth the fight with area NIMBYs, a subway extension to LaGuardia was put back on the table at the end of 2020 when the Federal Aviation Administration allowed passenger facility fees collected by airport authorities to be used for rail projects that don’t exclusively serve airports they connect to.”

Colon saved his last shot for the “other emerging technologies,” which he said were included “alarmingly”: “Most concerning, the Port Authority includes one scenario right out of science-fiction (or Elon Musk’s snake oil brochure): a mention of ‘narrow tunnels with electric vehicles’ or ‘small group pod systems’ that run on a fixed guideway, both of which sound like Tesla-branded grifts, one of which is running in Las Vegas, and the other once pitched as a solution to get people to Chicago’s O’Hare Airport. (The slide that mentions such “emerging technology” offers no route map, suggesting that passengers will be beamed to their destinations through molecular transportation).”

How any of these ideas would connect with the newly proposed Interborough Express (IBX) is unclear. That proposal calls for a line that would skip Manhattan, and operate in Brooklyn and Queens. It would link many of the subway lines that go through those boroughs, but it has drawn criticism for eliminating a segment in the Bronx, which was part of the original proposal. While many advocates have cheered it, they may be jumping the gun, because there has not yet been a commitment to make it a rail line. The MTA is keeping open the possibility of making it a bus route instead.

Another proposal calls for new subway service that would take Manhattanites to LGA, but without a high capital cost, at least not at the beginning. AmeriStarRail, which has also proposed a different style of operation for Amtrak’s Northeast Corridor (NEC), presented the idea to Gov. Hochul on Dec. 17, 2021, with maps of the project’s three phases.

According to the report, the three phases of establishing the AmeriStarRail approch are: “Phase 1: AirTrain LaGuardia express trains operating within the available track capacity of the N route from City Hall to Astoria where shuttle buses would connect customers to each LaGuardia Terminal. Phase 2: Construct elevated tracks and two new stations to bring trains to each terminal at LaGuardia and utilize the same technology currently in use on AirTrain JFK. Phase 3: Extend AirTrain LaGuardia over the Van Wyck Expressway to connect with the existing AirTrain JFK at Jamaica.”

AmeriStarRail’s letter said that critics labeled the former proposal, which would link the airport with Willits Point station on the No. 7 Train and the LIRR, as too expensive, questioned the estimated traffic reductions of the project, and said this about the its alternative: “AmeriStarRail’s AirTrain LaGuardia/JFK System will provide Manhattan and the New York region with a bigger, bolder, better way to finally bring rail transit service to LaGuardia Airport. Trains are the most sustainable, climate-friendly form of transportation. With the new AirTrain LaGuardia/JFK System, airport passengers/workers from the New York region and Queens communities along the route will have an innovative way to go easy on the environment and go by train.”

CEO Scott Spencer claimed that Phase 1 could be ready for operation in a few months: “AmeriStarRail is proposing that the Port Authority, MTA and NYCT implement the first phase by this Spring 2022 to create a dedicated AirTrain LaGuardia Express train service from Manhattan to connect with electric shuttle buses at Astoria-Ditmars Blvd. to each LaGuardia Airport terminal using existing trains and buses.” His letter to Hochul and maps of the plan can be downloaded here.