It is said that the most dangerous place to stand is between a television camera and the publicity hungry Democratic Senator from New York, Chuck Schumer.

Some of the current putative candidates to succeed Ray LaHood as President Obama’s Transportation Secretary are not far behind Schumer. Some, however, might benefit from media training.

Chief among them is Los Angeles Mayor Antonio Villaraigosa, whose lapse of judgment found him in a well-circulated photograph with bad-boy Charlie Sheen outside a Mexico hotel, looking something akin to fraternity brothers celebrating following an all-night party. Sheen, his chest well exposed, is seen with his arm around the neck of hizzoner, whose own top two shirt buttons are undone.

One can only imagine Sheen, in tow of Villaraigosa, showing up at a White House dinner and trashing the place, scandalously reminiscent of Sheen’s NYPD-alleged 2010 trashing of a New York Plaza Hotel suite following a night of drinking and cocaine use in the company of a female that the New York Post identified as a “hooker.”

The timing of the Baja, California rendezvous was awkward, with the word already circulating that the Association of American Railroads was supporting Villaraigosa’s nomination. Hizzoner subsequently withdrew his name from consideration, but among politicians, second acts do occur—even if Sheen described Villaraigosa as a dude who “knows how to party … a terrific guy, a great mayor, and he can drink with the best of ’em: me.”

LaTourette, a House Transportation & Infrastructure Committee luminary until his retirement from Congress last year, also has been mentioned as under consideration for an AAR lobbying role. To his credit, LaTourette displayed an uncomfortable smile as Maher and Short commenced an inventory of oaths that might cause even Joe Biden and Dick Cheney to blush.

Michigan’s former Democratic Gov. Jennifer Granholm, who has been downplaying her possible nomination for the transportation post, is another recognizable face, having hosted a news analysis show—The War Room with Jennifer Granholm—on Al Gore’s Current TV cable channel, departing when it was sold to Al Jazeera. Perhaps she is best recognized for her well-publicized and reported “hyperactive and sharp-tongued” 2012 Democratic National Convention speech supporting Obama’s bailout of the auto industry and criticizing Mitt Romney’s opposition.

Another frequently seen TV face is that of Assistant House Minority Leader James Clyburn (D-S.C.), whose nomination is being pushed by the Congressional Black Caucus. Although Clyburn expresses little interest in the post, he is a shrewd politician who knows the pick will be decided by the White House alone. As an aside, Clyburn’s cousin is former Surface Transportation Board member William Clyburn, who himself is considered a possible Obama choice to return to the agency, notwithstanding captive shipper opposition.

Then there is the loquacious, erudite, and collegial former House Transportation & Infrastructure Committee Chairman Jim Oberstar (D-Minn.), who departed Congress after 36 years and whose acquaintance with the news media and lengthy committee-hearing soliloquys are legend on Capitol Hill. Unlike the more tactful Clyburn, Oberstar told minnpost.com that it “would be a great honor” to be nominated as Transportation Secretary. “It would certainly be the culmination of all that I’ve learned and trained for and developed over the years. I’ve been here since the [transportation] department was born [in 1967].”

Consider, also, as a possible nominee former Philadelphia mayor and Pennsylvania Gov. Ed Rendell, more recently a Philadelphia Eagles football analyst for Comcast, and who also had a cameo appearance as mayor in the 1993 film, “Philadelphia.” While his face is more recognizable in Pennsylvania, The New York Times termed Rendell’s job in solving Philadelphia’s fiscal problems “the most stunning turnaround in recent urban history,” while Al Gore and former New York Mayor Rudy Giulliani both dubbed him, “America’s mayor.”

Rendell’s most memorable quote came on Comcast when the Eagles cancelled a game because of an impending snow storm: “We’ve become a nation of wusses. The Chinese are kicking our butt in everything. If this was in China do you think the Chinese would have called off the game? People would have been marching down to the stadium, they would have walked, and they would have been doing calculus on the way down.”

And who doesn’t recognize the face of National Transportation Safety Board Chairman Debbie Hersman, an articulate media presence following high-profile railroad accidents? A former aide to Senate Commerce Committee Democrats, Hersman is especially keen when it comes to railroad public policy and safety issues. Her strong vocal support for implementation of Positive Train Control makes her less of a favorite of the railroad industry.

Is there an assumed candidate for Transportation Secretary whose face is not recognizable? That would be Deputy Transportation Secretary John Porcari, who formerly was Maryland’s Deputy Secretary of Transportation. Good grief, an unknown face among these many luminaries? Well, so was fellow Marylander and Richard Nixon’s vice presidential choice, Spiro Agnew, who, at the 1968 Republican National Convention, evoked, “Spiro who?” chants by delegates supporting the more recognizable Michigan Gov. George Romney for the post.

And the survey says? 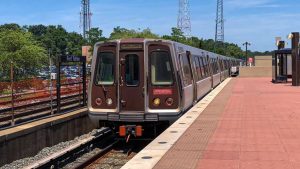