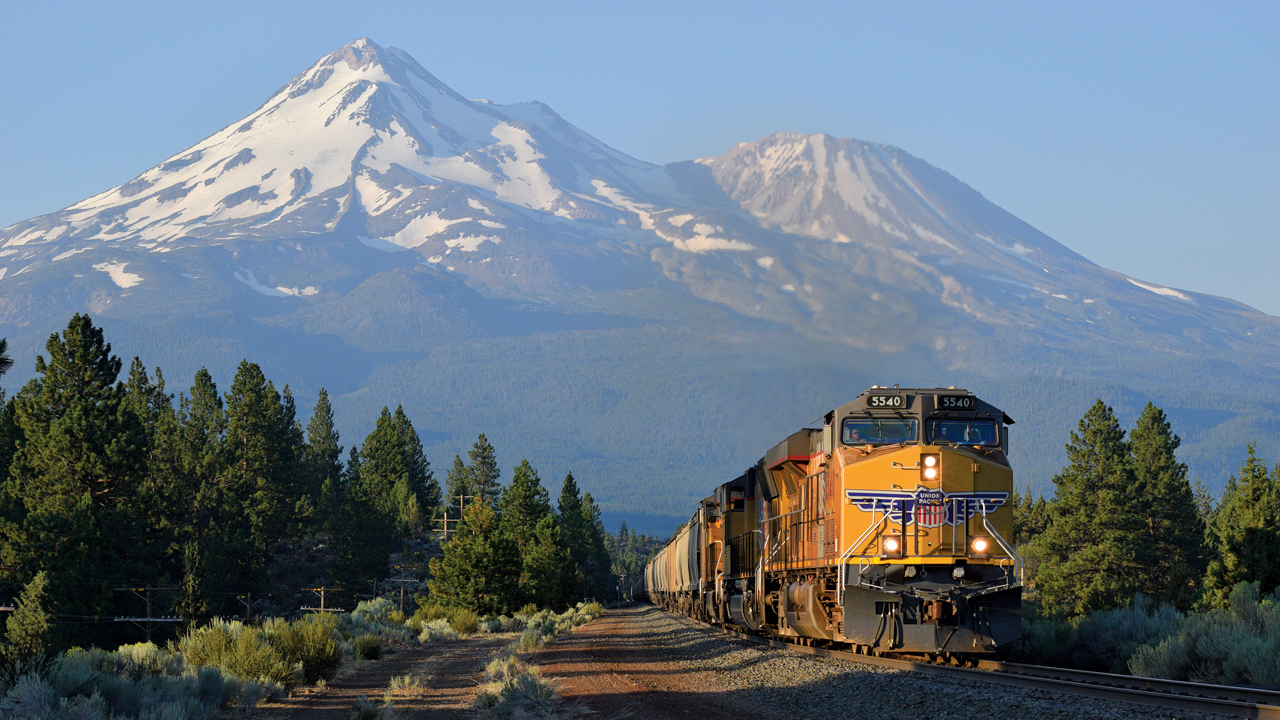 Among the top five locations listed as “very high threat” in the 2018 Update to the U.S. Geological Survey National Volcanic Threat Assessment are three that could pose serious danger to nearby railroads and communities: Mount Rainier and Mount St. Helens in western Washington, and Mount Shasta in northern California. Prior to the catastrophic eruption of Mount St. Helens in 1980, these Cascade Range volcanoes were considered relatively dormant, but geologists now see them as quietly active. According to the USGS, their greatest danger is less about lava flow and more about hot gases that turn snowpacks and glaciers into enormous mud and debris flows known as lahars.

Mount Rainier’s last major lahars, 500 to 1,000 years ago, reached areas now occupied by the cities of Auburn and Sumner, Wash. Minor eruptions and steam releases on the mountain were observed during the 1890s. A map of Rainier’s potential lahar impact zone shows that BNSF, Union Pacific and other railroads (including Amtrak service) between Seattle and Vancouver, Wash., lie in the path of destructive debris flows.

When Mount St. Helens erupted in 1980, the combination of blast force, ash and debris flow killed 57 people and caused more than $1 billion in damage, including the destruction of some 15 miles of rail line. Weyerhaeuser Company’s logging railroad suffered damage to or complete loss of four bridges, rolling stock and 12 miles of its main line. Several of its employees were among the fatalities. And an estimated 47,000 acres of the company’s standing timber and 2 million cubic yards of stored logs were devastated.

Gus Melonas, a Seattle-based spokesman for BNSF and for predecessor Burlington Northern Railroad at the time of the eruption, tells Railway Age, “There was impact to our operations on the Stampede, Seattle Sub and Columbia River Gorge routes. This required dredging under structures, culvert and drainage enhancements, and ballast cleaning. Also, ash impacted vehicle, locomotive and equipment operation.”

BN actually owned a portion of Mount St. Helens as part of a checkerboard of properties handed down by predecessor Northern Pacific, dating back to an 1864 land grant enacted by President Abraham Lincoln. After the summit was “blasted into the atmosphere,” as one U.S. Forest Service employee put it, BN agreed to a land swap with the Forest Service that led to the creation of Mount St. Helens National Volcanic Monument.

As for the high threat ranking of Mount Rainier and Mount St. Helens by the USGS, BNSF’s Gus Melonas says, “We realize the potential of eruption impact in this region, and we prepare and respond as necessary. We work closely with associated local and federal agencies who monitor activity. We have protocols in place for employee evacuation and railroad inspection. The safety of our people, communities and the environment is top priority.”

Northern California’s Mount Shasta ranks fifth on the “very high threat” list (St. Helens and Rainier are second and third), but the USGS says that, based on its age and low magma output over time, “Mount Shasta is the most likely Cascade Range volcano to produce an explosive eruption of very large volume.” The USGS says Shasta’s last known eruption was probably around 1786, but that its history suggests, “The chance is 1 in 3 that it will erupt in a person’s life time.”

Some 30 miles of UP’s main line between California and the Pacific Northwest clings to the western flank of Mount Shasta, crossing a series of lava fields formed by eruptions more than 1,000 years ago. Of greater concern than lava, the Whitney-Bolam Creek drainage on Shasta’s northwest slope has long been a trouble spot for UP and predecessor Southern Pacific due to debris and mud flows from non-eruption weather events. The USGS warns that heat and seismic activity from a true eruption could generate a massive lahar spreading more than 30 miles from Shasta’s summit. UP track lies less than 10 miles from the summit.

When asked what plans UP has for responding to an eruption, or whether alternate routes have been surveyed in case Mount Shasta leaves portions of the current rail line permanently buried under huge deposits of debris or lava, UP spokesperson Raquel Espinoza said, “While we are not providing specifics, Union Pacific monitors and prepares infrastructure for potential environmental impacts across our network.”